Prithvi Shaw was the star performer as Delhi Capitals recorded an emphatic seven-wicket win over Kolkata Knight Riders in the Indian Premier League. 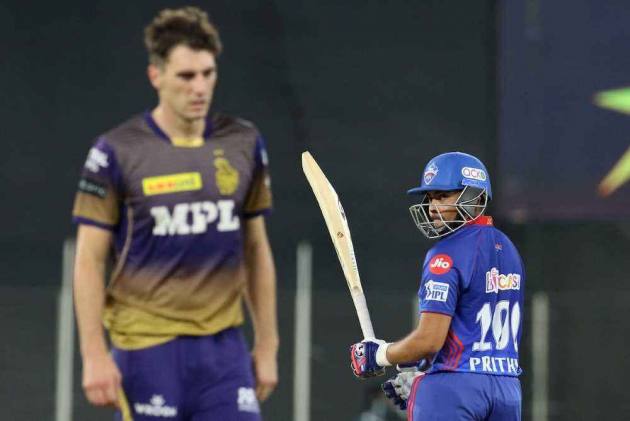 Prithvi Shaw was the star performer for Delhi Capitals as they recorded an emphatic seven-wicket win over Kolkata Knight Riders in the Indian Premier League.

Shaw hit 11 fours – including six in a row in one over – and a trio of sixes in an innings of 82 that helped the Capitals coast to a 155-run target at the Narendra Modi Stadium in Ahmedabad.

Shikhar Dhawan was happy enough to play second fiddle to his opening partner, making 46 from 47 balls before falling lbw to Pat Cummins with the total on 132 in the 14th over.

Cummins (3-24) also removed the outstanding Shaw and Rishabh Pant (16) with the finishing line in sight, leaving Marcus Stoinis to complete the job with a streaky four as Delhi triumphed with 21 balls to spare.

Kolkata had been indebted to some big hitting in the closing stages from Andre Russell but still finished with a below-par 154-6. The all-rounder blasted two fours and four sixes to top score with 45 not out.

Their hopes of posting a more substantial total had been damaged by losing four wickets for 13 runs in the middle overs, seeing them slip from 69-1 to 82-5.

Shubman Gill made 43 at the top of the order but both captain Eoin Morgan and Sunil Narine failed to trouble the scorers amid the collapse.

Lalit Yadav finished with figures of 2-13 for Delhi, while Axar Patel (2-32) also struck twice with his left-arm spin to help restrict the Knight Riders, who have now lost five of the past six meetings between the teams.

Russell celebrated his 33rd birthday with an eye-catching 27-ball knock that saw him surpass 6,000 Twenty20 runs in his career.

The right-hander was cautious at first before cutting loose, smashing Kagiso Rabada for successive sixes to finish the 19th over before ending the 20th with another off the bowling of Avesh Khan.

Capitals gain from a Shaw thing

Shaw reached his half-century from just 18 deliveries, aided by taking Shivam Mavi for six successive fours in an opening over that cost 25 runs (Delhi's reply had started with a wide).

Delhi's fifth victory in seven outings in the 2021 season sees them move level on 10 points with leaders Chennai Super Kings and Royal Challengers Bangalore in the table.