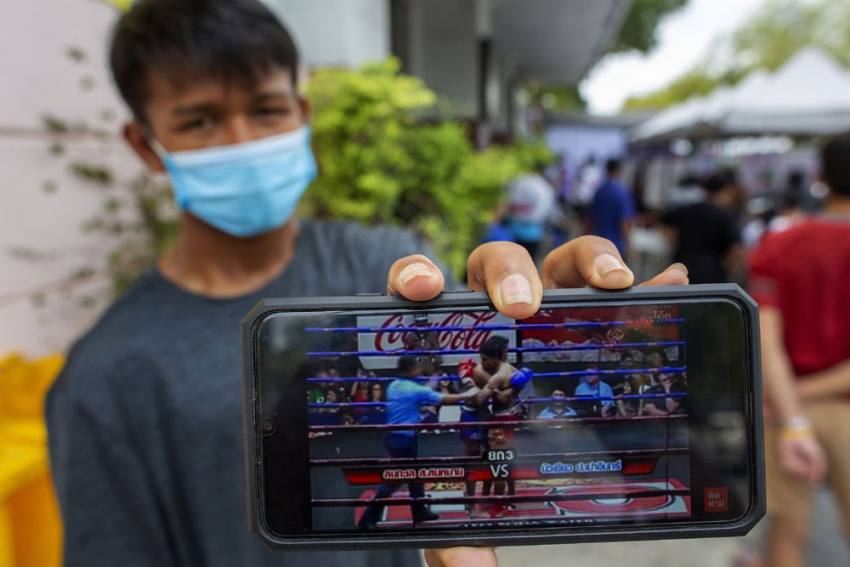 In this Thursday, March 19, 2020, photo, Rum Phonchai, a Muay Thai boxing fighter displays his mobile phone playing a video of his last fight in front of a makeshift screening facility outside Rajadamnern boxing stadium in Bangkok, Thailand. Kickboxing aficionados came from all over Thailand to attend a major Muay Thai tournament at Bangkok's indoor Lumpini Stadium on March 6, 2020. Dozens or more went home unknowingly carrying the coronavirus. For most people the new COVID-19 coronavirus causes only mild or moderate symptoms, but for some it can cause more severe illness.
AP Photo
Agencies 2020-03-21T16:54:03+05:30 Coronavirus Pandemic: Kickboxing Match In Bangkok Leads To Spike In Infections 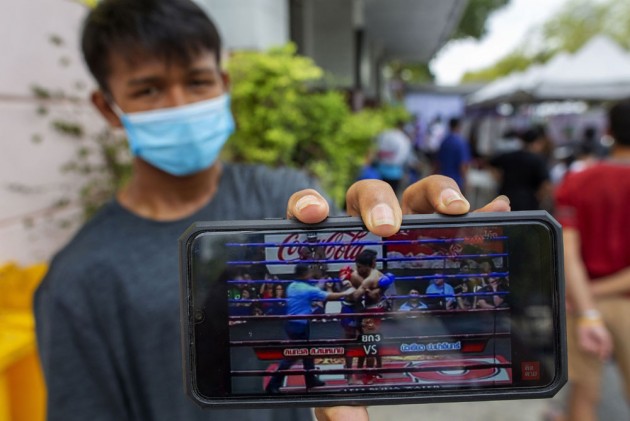 Kickboxing aficionados came from all over Thailand to attend a major Muay Thai match at Bangkok's indoor Lumpini Stadium on March 6. Dozens or more went home unknowingly carrying the coronavirus.

The wayward boxing fans led an inevitable rise in infections this month that forced the government to abandon its less than sturdy approach to combating COVID-19 that has failed to inspire public confidence.

As of Friday, confirmed cases from three boxing stadiums in Bangkok totaled 72, more than a fifth of the national toll of 322. An actor, a major-general, a politician, a boxing trainer and a slew of ordinary fans are among the coronavirus cases from the March 6 event.

It's feared hundreds more in all corners of the country could be viral time bombs. Health officials take the threat seriously.

"The more people who report themselves, the easier it is for us to track down others with the virus before it's too late." said Dr. Thaveesin Visanuyothin, a spokesman for the Public Health Ministry.

But even as Prime Minister Prayuth Chan-ocha this past week announced measures to fight the spread of COVID-19 — including postponing a major three-day holiday, shutting down schools and allowing provincial governors to close any gathering spaces — he insisted the country was not going into shutdown.

He told his countrymen the crisis had not yet reached Phase 3, an epidemic that would be triggered by significant domestic transmission of the virus. How that would be determined is hard to judge, especially because Prayuth's government has been criticized for a lack of transparency and consistency in releasing information.

Even a crackdown implemented this week on arrivals sends a mixed message. Instead of banning international flights, as several nations have done, foreign visitors must have health certificates affirming they are free of the virus. The requirement is impractical, because in many if not most countries, it's hard to even get tested without showing symptoms of the illness.

Any illusion that Thailand would somehow avoid a spike in infections was dispelled this month with the discovery of a cluster case from a single discrete source. The infected people were a group of millennials who were reported to have been partying at an upmarket Bangkok nightspot with a visitor from Hong Kong. Health authorities scolded the partygoers for sharing drinks and cigarettes.

Just days later, a local celebrity in Muay Thai circles posted a message on his Instagram account. Muay Thai is the national sport, with a devoted fan base nationwide spanning social classes.

"This is NOT a joke, for those that have been in close contact with me the last few days please take precautions. I have the Covid-19 virus#covid 19," said the March 13 message from Matthew Deane Chanthavanij, next to a video of him wearing a black surgical mask.

Some people initially derided his post as a publicity stunt, for which he could be criminally prosecuted. It also exposed a second, potentially more dangerous cluster: the Lumpini Stadium boxing crowd.

Matthew Deane, as he is usually called, is an actor, model, singer and athlete. The 41-year-old Australian-born is also a serious devotee of Muay Thai, and even owns a boxing gym.

He was a master of ceremonies at the Lumpini Stadium match, stepping into the ring to interview boxers and promoters and hand out prizes to winners of a raffle.

The air-conditioned hall was hosting the first big Muay Thai event of the season. Eleven bouts started at 6 p.m and ended just after midnight. The crowd of about 5,000 roared every time punches and kicks were exchanged.

“We were squeezed against each other. Normally the place isn't that crowded,” said Suwan Jitpinit, who traveled from his hometown in Sukhothai province, a 420-kilometer (260-mile) drive.

“At other regular events, there would be about 1,500 to 2,000 people in the stadium but because this was a special match, there were many more people,” recalled the 37-year-old boxing critic. He stayed in Bangkok for a match at another stadium before going home on March 10.

On the drive home, he began to feel feverish and was shivering so much he had to ask someone else to drive. When he arrived that evening, he went to a local hospital and was diagnosed with tonsillitis. Not feeling any better three days later, he sought help from a bigger hospital in nearby Phitsanulok.

After hearing the news about Matthew Deane, he asked to be tested for coronavirus. The result came back positive. His wife was infected too, and their village in Sukhothai is now under quarantine.

Ordinary boxing fans from other provinces, both near Bangkok and in the north, the northeast and the south, have also tested positive for the disease.
Among them: a local politician who is especially diligent in attending to his constituents in a province east of Bangkok.

According to reports in the Thai media, between the time he attended the Lumpini match and when he tested positive, Kitti Paopiamsap, head of the Chachoengsao provincial administration organization, attended six weddings, six funerals, three community meetings (two of them with the elderly), three Buddhist ordinations, three fairs and at least four other public meetings.

"It is sad that the boxing event has aggravated the situation," said Pinit Polkhan, who shared announcing duties with Matthew Deane and like him caught the virus. "Certainly, the boxing industry is taking a hard hit, and the whole country as well."