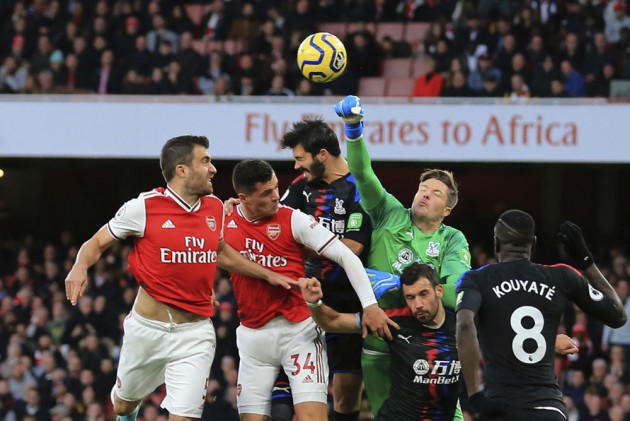 Granit Xhaka reacted furiously to home supporters booing him as Arsenal threw away a two-goal lead to draw 2-2 with Crystal Palace at Emirates Stadium on Sunday. (More Football News)

The Gunners captain cupped his ears to the fans who appeared to ironically cheer him as he left the pitch on the hour mark, before removing his shirt and walking straight down the tunnel.

That is one more headache for manager Unai Emery to contend with after his side threw away a golden opportunity to bounce back to winning ways in the Premier League after the defeat to Sheffield United on Monday.

Sokratis Papastathopoulos and David Luiz put them 2-0 up after just nine minutes, but Palace ensured a share of the spoils with a Luka Milivojevic penalty and Jordan Ayew header either side of half-time. Sokratis had a late effort ruled out after a VAR review, as Arsenal's afternoon ended in misery.

Arsenal started in blistering fashion and raced into a two-goal lead inside nine minutes.

Sokratis hit the first in the seventh minute, volleying home from close range after Palace made a mess of a corner, before David Luiz doubled their advantage 106 seconds later. The Brazilian stormed in unmarked at the back post to prod home Alexandre Lacazette's flick-on from a corner.

Palace stemmed the Arsenal tide and reduced the deficit in the 32nd minute. A VAR review overturned Martin Atkinson's original decision to book Wilfried Zaha for a dive in the penalty area under a challenge from Calum Chambers, with Milivojevic slotting home the resulting spot-kick.

Palace restored parity seven minutes into the second period when Ayew lost David Luiz in the area to nod home James McArthur's cross from the left.

Xhaka's spat with supporters followed soon after, while Sokratis thought he had sealed all three points six minutes from time. His effort from 10 yards was ruled out following a review, however, after Chambers had been deemed to have made a foul in the build-up.

Zaha flashed wide in the closing stages as Palace threatened to make life even more difficult for Emery, who now faces the unenviable task of building bridges between his captain and supporters.

The points are shared in north London.#ARSCRY

What does it mean? Problems on multiple fronts for Emery

Trouble never seems to be far away for Arsenal's under-fire boss, whose side are now four points behind fourth-placed Chelsea. The soft underbelly that has plagued the Gunners for years has still yet to be fixed, with chances being gifted to their opponents far too regularly. There is also the small matter of managing the inevitable fallout from Xhaka's ill-advised decision to respond to supporters' jeers.

Zaha too hot to handle for Gunners

He might not have got on the scoresheet but Palace's talisman was at his mesmerising best. His trickery led to the first-half penalty, while he came agonisingly close to a stoppage-time winner that would have capped a superb display.

Quite why the decision leading to Palace's penalty needed to be made by VAR is unclear. Referee Atkinson had a crystal-clear view of Chambers' clumsy challenge on Zaha, yet he inexplicably booked the Ivorian winger for simulation.

Arsenal travel to Liverpool for an EFL Cup last-16 tie on Wednesday before returning to domestic action on Saturday with a home clash against Wolves. Palace, meanwhile, host Leicester City in the Premier League on Sunday.