Home  »  Website  »  National  » News Analysis  »  Is Rahul Gandhi Back In Command Of The Congress Amid Coronavirus Crisis?

Is Rahul Gandhi Back In Command Of The Congress Amid Coronavirus Crisis?

The composition of the Congress' consultative group is, perhaps, the biggest indicator of Rahul Gandi's willingness to assume the mantle he had abruptly vacated after the party was decimated in previous Lok Sabha polls. 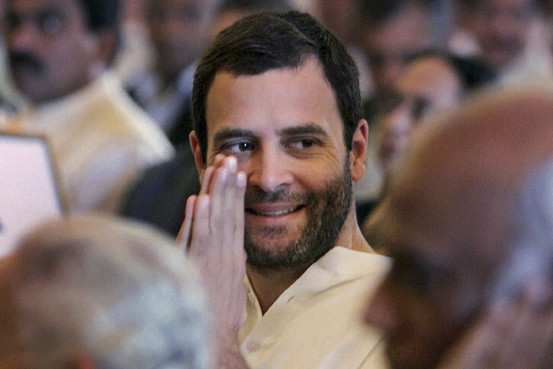 Interim Congress chief Sonia Gandhi's decision to constitute an 11-member consultative group, with her son Rahul Gandhi as its member, has, once again, triggered rumours about the Wayanad MP's imminent return as president of the beleaguered Grand Old Party. That the group was constituted just two days after Rahul addressed the media, via video conference, to offer "constructive suggestions" to the Centre on handling the ongoing coronavirus crisis has also added some credibility to such rumours which have waxed and waned ever since Sonia took back charge of the party in August last year. The first meeting of this group is scheduled for Monday, April 20.

The consultative group, under the chairmanship of former Prime Minister Dr. Manmohan Singh, will "meet virtually, normally every day, to deliberate on matters of current concern and formulate the views of the Party on various issues," said the statement issued on April 18 by K.C. Venugopal, Congress general secretary in-charge of the organization. While the party's media cell chief Randeep Surjewala is the group's convenor, the other members include former Union ministers P. Chidambaram, Jairam Ramesh and Manish Tewari along with Venugopal, Praveen Chakravarty, Gourav Vallabh, Supriya Shrinate and Rohan Gupta, besides Rahul Gandhi.

The composition of the group is, perhaps, the biggest indicator of Rahul's willingness to assume the mantle he had abruptly vacated after the Congress was decimated in last year's Lok Sabha polls. Party veterans Ahmed Patel, A.K Antony, Ambika Soni, Ghulam Nabi Azad and Anand Sharma who normally figure as members of most important committees formed within the Congress in the past have not been included in this group.

Also Read: Rahul Gandhi Is Right On COVID-19 Strategy Even If You Dismiss Him As Pappu

The group is packed with leaders closely identified as members of Rahul's coterie - Venugopal, Surjewala, Chakravarty, Vallabh, Gupta and new entrant Shrinate - a former journalist who quit her job with a TV news channel ahead of the Lok Sabha polls to unsuccessfully contest the election from UP's Maharajganj constituency. Singh, Chidambaram and Ramesh are veterans who Rahul regularly defers to for advice on economic and social issues. Though not really identified as a member of either Sonia or Rahul's coterie, Tewari has made an impressive comeback of sorts riding on the back of his pointed interventions against the Centre on economic, legal and policy matters, both inside Parliament and outside it.

The message that Sonia and Rahul perhaps wanted to send across with the group's composition is not lost on anyone within the party. This is, arguably, most evident with the inclusion of Chakravarty. After the Lok Sabha debacle, the party's Old Guard had gunned for Chakravarty, who was then heading the Congress Data Cell and reporting only to Rahul. Through convenient off-record quotes, stories appeared in various newspapers alleging how Chakravarty embezzled party funds, fudged internal surveys and misguided Rahul on the party's real prospects in the election. Soon after Rahul stepped down as party chief, Chakravarty's wings were clipped and the supposedly autonomous data cell which he helmed was turned into a department functioning under the party's organisation general secretary, K.C. Venugopal. Venugopal remained a key office-bearer despite reservations of some veterans who wanted him removed or reassigned to a less important role only because, sources say, he remained the bridge between the organisation's Old Guard syndicate and Rahul.

A party leader included in this new consultative group tells Outlook that Rahul's inclusion signals a "definite thaw" in the Wayanad MP's hitherto frosty attitude towards taking an active role in party matters. However, "whether he does finally agree to return as Congress chief or prefers to work behind the scenes with Sonia staying on as president is a question only the family (Sonia, Rahul and Priyanka) can answer... Everything else is only speculation," the leader adds. A Rahul confidante adds, "as of now, he wants the party to focus only on the coronavirus crisis; this group too will stick to issues related to the pandemic and its direct impact on the economy. I do not see him returning as party chief while the crisis is on, it would also send the wrong message because the BJP will accuse us of trying to take advantage of the pandemic to propel Rahul to the forefront again... But yes, you can expect him to be more active now because the crisis affects those who Rahul most cares for, the poor and marginalised."

Also Read | Lockdown Like A Pause Button, Not A Solution To Coronavirus Crisis: Rahul Gandhi

A party veteran says it was always clear that Sonia's decision to return as interim chief was a "stop-gap arrangement meant to give Rahul time to think over the changes he wishes to bring to the party and how he wants to handle the seniors who, he felt, had betrayed him during the Lok Sabha campaign". The leader adds that Rahul is still wary of the syndicate of old warhorses in the party and would prefer to work either with those he really trusts or people whose domain expertise he values - a fact that is reflected in the composition of the consultative group.

A section of party leaders had, in fact, been speculating that the change of guard could take place in April, with Rahul returning to helm the party nationally, his sister Priyanka Gandhi Vadra continuing with her responsibility of reviving the party in Uttar Pradesh and Sonia intervening as and when the situation demanded her to. However, Rahul continued to harbour reservations about returning to the top role, says a leader close to the Wayanad MP, because of his "experience of dealing with the old dinosaurs of the party who wanted the blame for their faults to fall on and be shouldered by the Gandhi family". Rahul continued to reject proposals by Ahmed Patel and other seniors who repeatedly implored him to return as party chief and even refused to intervene when his own confidantes began getting restless with the stalemate in the Congress.

A party leader suspects that Rahul's dithering also had to do with his belief that "the party has to be purged of opportunistic, ideologically ambivalent and self-serving leaders" before he agreed to take an active interest in the Congress's functioning once again.

The coronavirus crisis and the ongoing lockdown, says another Rahul confidante who has been included in the consultative group, has served a "dual-purpose". The leader tells Outlook, "Rahul has been prophetic on the coronavirus crisis. Though the (Narendra) Modi government will never concede this, it has actually been accepting suggestions made by Rahul. This has proved that the Congress has a better sense of how the crisis needs to be handled. Secondly, for Rahul, the lockdown has given him more time to think about where he wants to take the party and how he wants to deal with the Old Guard which clearly won't just fade into the shadows quietly".

Most Congress leaders Outlook spoke to in a bid to understand the wider implications of the consultative group constituted by Sonia agreed that Rahul seems to have shed his reticence over active participation in the party's decision-making process. They maintained that answers to questions on if and when he would return as party president are still 'up in the air'. However, they agreed that Rahul's willingness to address more press briefings on the coronavirus crisis in the immediate future and his inclusion in the group that will formulate the party's views on issues beyond the pandemic and its impact on the economy signal a breakthrough.