National Until Three Years Ago They Were A Single Voter, Now They Have Separate Voting Rights

Until Three Years Ago They Were A Single Voter, Now They Have Separate Voting Rights

Sabah and Farah (23), the conjoined twins who live in Samanpura locality of Bihar, cast their votes on Sunday as per their respective choice unlike the 2015 assembly polls in the state. 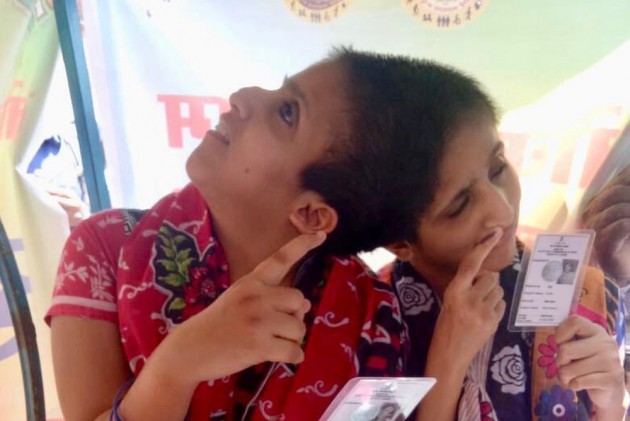 Two young women, residents of the Bihar capital and joined at the head since birth, have earned the right to be treated as separate individuals with independent voting rights.

Sabah and Farah (23), the conjoined twins who live in Samanpura locality of the city, cast their votes on Sunday as per their respective choice unlike the 2015 assembly polls in the state when their names were inscribed on a single voter ID card and their vote was,  consequently, treated as one.

The twins cannot be denied their individuality on account of the way they are physical. They have different minds, different opinions and choices. Therefore, this time they have been issued separate voter ID cards and they will be allowed to cast their votes by turns, District Magistrate, Patna, Kumar Ravi told PTI Saturday.

He said the reason why they had been treated as a single voter could have been that it has to be a secret ballot and no other individual is supposed to be present when one is casting his or her vote. However, the twins are conjoined in such a way that their heads are turned, always, in opposite directions. So there should not be much of a problem.

Moreover, they were also made to attend the Systematic Voters Education and Electoral Participation (SVEEP) workshop held recently. They have been told how to go about the
exercise. Poll officials of the assigned booth have been directed to do the needful when they arrive, he said.

The Siamese twins are enrolled in the electoral roll for Digha assembly segment under Patna Sahib Lok Sabha seat which goes to polls on May 19.

Their touching story was recently shared by the Election Commission of India on its official Twitter handle with the hashtag #Chunavkikahaniyan.

Born in a poor family, the girls were taken to the AIIMS at New Delhi by their parents where attempts were made, unsuccessfully, to separate them through surgical intervention.

Taking note of their plight, the Supreme Court had directed the state government to provide their family with monthly assistance of Rs 5,000 which was later raised to Rs 20,000 at the instance of Chief Minister Nitish Kumar. The sisters are diehard fans of Bollywood actor Salman Khan, whom they fondly call Bhai (brother) and the star had, learning about them, once arranged for their visit to Mumbai where they met their favourite hero in person and tied a rakhi on his wrist.

Reports had surfaced of their feeling devastated upon Khans arrest in the hit and run case and on the day when he was acquitted by the court the sisters had observed a fast and
kept praying for his release.