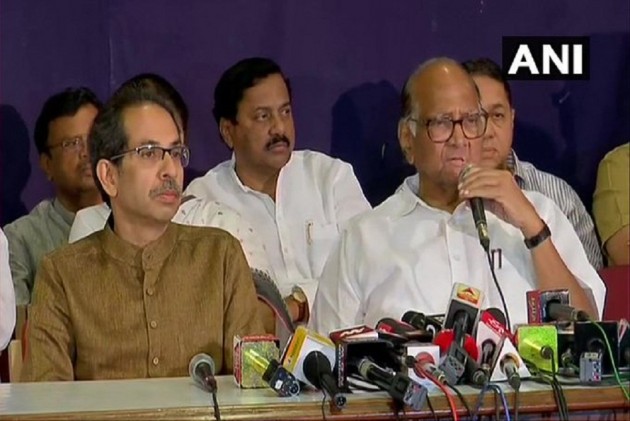 Nationalist Congress Party (NCP) chief Sharad Pawar said that the BJP lacks numbers to form government in the state of Maharashtra even as Devendra Fadnavis took oath as the state's Chief Minister, early in the moring on Saturday. (Catch all the live updates on the Maharashtra political drama here)

Adressing a joint press conference with Uddhav Thackeray in Mumbai,  Pawar said that that the Shiv Sena's leadership and the NCP are still together and that no NCP leader or worker is in favour of an NCP-BJP government.

"I'm sure Governor has given them time to prove majority but they won't be able prove it. After that our three parties will form the government as we had decided earlier," Sharad Pawar said.

Meanwhile, talking about the decision of his nephew Ajit Pawar to join hands with the BJP, Pawar said, "Ajit Pawar's decision is against the party line and is indiscipline."

Decision against Ajit Pawar will be taken by the disciplinary committee, he said.

Pawar alleged that signatures of his party MLAs were used by the BJP to show support of the NCP.

"54 newly-elected legislators of the NCP had signed a paper along with their names and constituencies for internal purpose and these signatures may have been misused as letter of support and submitted to the governor," he alleged.

"If this is true, the governor has also been misled," Pawar said, adding that the paper may have been taken by Ajit Pawar as the leader of the legislature party.

NCP legislature party meeting would be held later in the day to elect the new leader.

Pn the other hand, NCP MLA Rajendra Shingane who was present in the swearing-in ceremnoy said, "Ajit Pawar had called me to discuss something and from there I was taken with other MLAs to Raj Bhavan. Before we could understand oath ceremony was complete. I rushed to Pawar Sahab and told him I am with Sharad Pawar and NCP."

Sharad Pawar meanwhile issued a strong warning against all those party MLAs who were defecting to the BJP.

Also Read | 'Taken To Oath-Ceremony Without Any Information': 3 NCP MLAs Lash Out At Ajit Pawar

"All the MLAs who are going must know that there is an anti defection law and the possibility of them losing their assembly membership is high," he warned.

Talking to reporters in Mumbai, Shiv Sena leader Sanjay Raut also said the state will never forgive Ajit Pawar for this act of his.

"Ajit Pawar has stabbed the Shiv Sena in the back. Joining hands with the BJP to form the government is betrayal," he said.

The move of the BJP came at a time when deliberations between Congress, NCP and Shiv Sena seemingly reached the final stage on Friday. Earlier, NCP supremo Sharad Pawar had claimed that there was a consensus on Sena chief Uddhav Thackeray as chief minister of the alliance government.

Also Read | 'Naturally Corrupt Party': Here's What BJP Said About NCP In The Past

Shiv Sena parted its ways with BJP to explore ways to form a government. It, however, failed to prove the support of the required number of MLAs in the time given by state Governor Bhagat Singh Koshyari.