'I am sure no war is likely to happen. But strained relations between India and Pakistan will not help,' says senior Hurriyat leader Professor Abdul Gani Bhat. 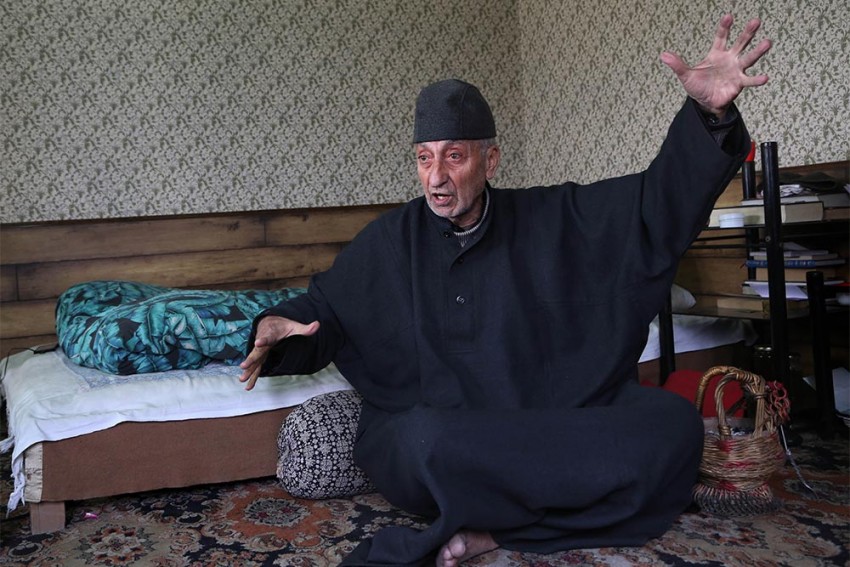 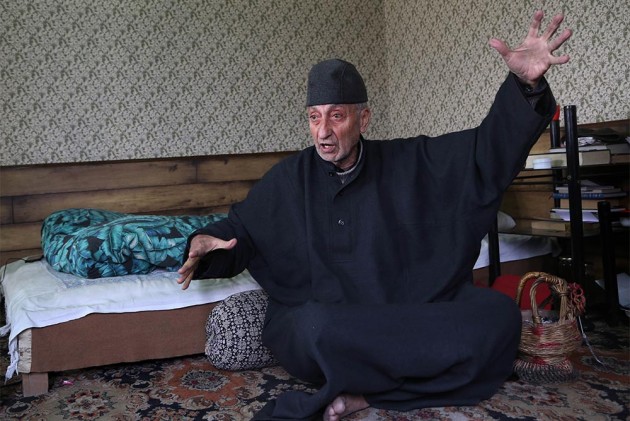 “The only way out toward a better tomorrow is through dialogue. The alternative to dialogue is war. Indians and Pakistanis know that war is not an alternative,” says senior Hurriyat leader Professor Abdul Gani Bhat, adding that “war will spell total disaster.”

But dialogue doesn’t happen in a vacuum, Bhat, known for his moderate views, tells Outlook in an interview at his residence in Srinagar. “It happens for a purpose and purpose is tomorrow; for the prosperity of entire people of sub-continent.”

There is no security at Prof. Bhat’s house since the government has withdrawn the security cover of Hurriyat leaders. He lives in a relatively calm area of civil-lines. “I am sure no war is likely to happen. But strained relations between India and Pakistan will not help. The two are nuclear powers with missile technology. Anything can happen,” he says, reiterating that “war is not an option.”

He says he loves people who chose to live in peace, adding “I trust the leadership in India and Pakistan will start talking.” He refused to talk about the future of Peoples Democratic Party and National Conference after the arrest of the top leaders of both parties including Farooq Abdullah and Omar Abdullah saying only that “the Abdullahs and Muftis know what is likely to befall them. I don’t know what they will do next.”

After the BJP government abrogated Articles 370 of the Indian Constitution and spilt Jammu and Kashmir State into two union territories, hardly any political leader across the political divide in the restive region has spoken on the issue. The arrest of political leaders, a communication blockade and huge deployment of the forces on the ground in the Valley has created an atmosphere of fear.

However, the eighty-year-old is not averse to expressing his views. He uses metaphors, avoids direct answers but agrees to talk, though with a caveat. “I have no interest in talking about Article 370 at this time. I will talk about it, but not now,” he says.

He says during the current clampdown Kashmiris expressed their anger with all the grace. “Kashmiris followed a strategy, a sound and pragmatic strategy, and had involved the entire world in their affair,” he says.

The “anger with grace” has paid a good dividend to the Kashmiris. “The Americans, the Russians, the Chinese, the British and the French and all other powers have advised settlement of the dispute,” he says.

The response of Kashmiris, he adds, has shown that they have not given up. “We have been fighting for the past 70 years, we have not given up,” he asserts. He says those who form the wrong opinion about the collective “political opinion of Kashmiris” will go wrong. “Kashmiris fight with a method. They involve themselves in a strategy and use their brains,” he says.

Russia, he points out, would have a few decades ago vetoed anything on Kashmir. But now it has asked India to hold talks on Kashmir. “People of the world are taking on the largest democracy of the world over Kashmir. It is not a defeat of the Kashmiri. Kashmiris are scoring, not suffering in this battle. We have attracted the attention of the world toward danger in Kashmir through this non-violent method,” he adds.

While talking about China moving a resolution in the UN Security Council, he says, one has to understand the region. “China is in Pakistan; America is in Afghanistan and wants to leave from there gracefully. Two big countries are in South Asian region and now the Kashmir dispute has emerged on the world radar with the danger of a possible confrontation between two nuclear powers. That is why the world seeks peace, for economic reasons,” he adds.

He says China is in the neighbourhood of India and Pakistan and if you look at the involvement of China in the region, it should genuinely feel concerned about the situation in the region. “How China reacts in the coming months, let us leave it to the Chinese leadership,” Prof. Bhat adds.

Although he insists that he does not want to talk about Articles 370 and 35A, but on persistent questions, he says: “Do not forget we used to have a prime minister of Jammu and Kashmir. We had Sadar-e-Riyasat (president). There was Article 370, but there were also UN resolutions. In spite of Article 370 three wars took place between India and Pakistan. There was a war between the two countries in 1971. There was Kargil war between two nuclear power countries…” Prof. Bhat says leaving the idea incomplete.

He takes a long pause and says: “At times when you raise the dust, it also brings clarity. There would be light after the darkness. I hope good sense will prevail. I wish dialogue between the two nuclear, hostile neighbours (takes place). Nuclear countries don’t go for war.”