"Muslims will have to stop sporadic clashes (communal incidents) or they will get 'eent ka jawab pathhar se (tit for tat response)." 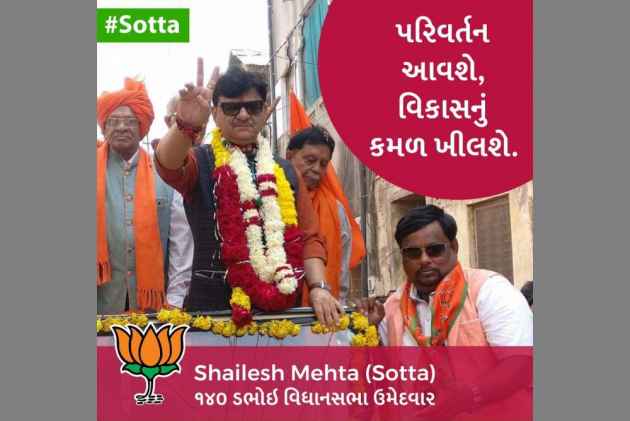 Bharatiya Janta Party candidate from Dabhoi Assembly seat in poll- bound  state of Gujarat, Shailesh Mehta Sotta on hursday sparked a controversy after he made a latent remark towards Muslims,  saying that the the population of "topi and dadhiwalas (people who wear caps and beards)" should be "reduced".

Sotta  has now being served notice by election authorities for making a "communally provocative” campaign speech , reported The Indian Express.

He also said that he came to Dabhoi to "instill fear" and that if sporadic communal clashes were not stopped a "befitting reply" would be given.

"If any 'topi, daadhiwala' (anybody wearing a cap and sporting beard) is sitting here (in the crowd), then pardon me, but there is a need to reduce their population. Many leaders asked me not to say this, as it may go against me, but if 90 per cent of people are supporting me, then why shall I stop speaking about the 10 per cent people?" Sotta purportedly said at what appeared to be a small gathering in Dabhoi town in Vadodara district.

The video of the speech he made in Gujarati has gone viral.

"(They say) don't talk about the community in which you are born (Hindu), and if you want to talk about that (the community), then don't contest election. But I will fight election for the religion in which I am born," Sotta purportedly said.

Sotta, a Vadodara councillor who is contesting Assembly polls for the first time, said they (Muslims) will have to stop sporadic clashes (communal incidents) or they will get 'eent ka jawab pathhar se (tit for tat response).

Dabhoi is going to polls in the second phase on December 14.

"There was a meeting of a peace committee in which a 'tadipaar' (externed criminal) said that he is scared of the BJP candidate (Sotta). There is nothing wrong in this," he said.

He said he came to Dabhoi to "scare people" and not the other way round.

"I came here to scare people. I am here not to get frightened, but to make others frightened. And if anti-social elements remain scared, then it is required for this place," he said.

Sotta could not be contacted on phone for his reaction.

He is pitted against senior Congress leader Siddharth Patel.

After Sotta's video was aired by some news channels, Ahmedabad-based social worker Nishant Varma filed a complaint with the State Election Commission against Sotta over his "highly communal and instigating" comments against the Muslim community and for "violating the poll code".

"He (Sotta) is clearly heard saying that Muslim population must be reduced in the area, and that Muslims will face 'eent ka jawab pathhar se'. He is saying all this to appease 90 per cent (Hindu) voters and not the rest 10 per cent," Varma said in his complaint.

"He (Sotta) is referring to Muslims as 'topi and daadhiwala' which is completely unacceptable and a clear violation of the model code of conduct as well as various provisions of the CrPC and IPC," he said.