The curbs continue as a precautionary measure to prevent protests against the killing of 13 militants in three encounters on Sunday and five civilians in the aftermath. 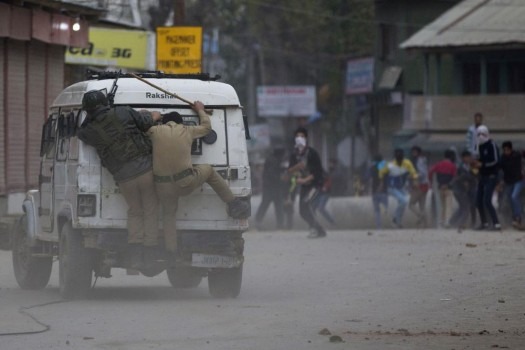 Restrictions continued in parts of Kashmir for the third day today as a precautionary measure following protests over killings in Sunday's encounters, even as a shutdown was observed here and in several other areas of the Valley.

The restriction on movement of people was put in place in the wake of agitations and a strike call by separatists after the encounters in Jammu and Kashmir's Sophian and Anantnag districts.

"Restrictions under Section 144 of the CrPC are in place for the third consecutive day in Kulgam, Pulwama and Shopian districts and parts of Anantnag as a precautionary measure to maintain law and order," a police official said.

He said the restrictions were also in force in Khanyar, Maharajgunj, Nowhatta, Rainawari and Safakadal, while partially in Maisuma and Kralkhud police station areas of the summer capital.

The curbs continue as a precautionary measure to prevent protests against the killing of 13 militants in three encounters on Sunday and five civilians in the aftermath of those encounters, the official said.

Schools, colleges and other educational institutions remained closed for the third day as authorities decided to suspend classes, he said.

The official said that all examinations to be held today by universities in the Valley and educational instructions have been postponed.

Meanwhile, a spontaneous shutdown was observed in many districts of the valley, including Srinagar.

Most shops, petrol pumps and other business establishments remained closed while public transport was sparse.

Though there was no shutdown call for today, separatists, under the banner of Joint Resistance Leadership (JRL), have asked people to march to Shopian to express solidarity with the families who lost their loved ones in the three encounters between militants and security forces on Sunday.