What If Prithviraj Kapoor Had Not Left Peshawar?

Well, for one the rest of the talented lot of the family would never have appeared in films either, nor all those great films made. 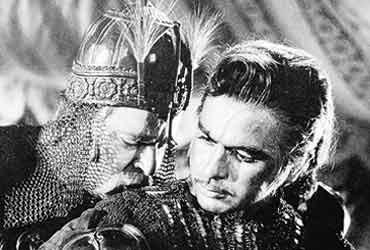 Artists are not known by their families, but the contribution they make to their chosen sphere. I have no hesitation in saying that the Kapoor clan has not only given the film industry many famous artists but also given us many outstanding films for which they shall always be remembered.

The Kapoors were a well-established Pathan family in Peshawar (now in Pakistan) and generally people did not take the Pathans seriously when it came to films or the arts. Which is why when the son Police sub inspector Dewan Basheshwarnath Kapoor from Peshawar came to Bombay to try his luck, Baburao the editor of the then well-known film magazine Film India wrote: 'There is no place for those Pathans who think they'd become actors here".

The real Pathan took up the challenge and said, "Baburao don't challenge this Pathan. If there is no place for me in Indian films, I'd cross the seven seas and go to Hollywood and become an actor there." History is witness that this Pathan did not have to go to Hollywood and he made a name for himself here as Prithviraj Kapoor. Is there anybody who can forget the role of Akbar he played in Mughal-e Azam? And why just Mughal-e Azam, there's a long list of such films through which Prithviraj Kapoor, with his absolutely unique voice, dialogue-delivery and acting, made a special place for himself in Indian cinema.

The Kapoor clan will also be remembered in Hindi cinema because this is the only family which is connected with films for five successive generations. When Prithiviraj's son Raj Kapoor made Aawara, his grandfather Bashehwarnath Kapoor too, was seen in a short role. Apart from Raj Kapoor, his brothers Shamsherraj (Shammi Kapoor) and Baldevraj (Shashi Kapoor) were not only stars in their times, but their children too earned a lot of fame. After the colourfully successful innings by Raj Kapoor's sons Rishi and Randhir, now Randhir's daughters Karisma and Kareena too are carrying their family tradition forward. These daughters are thus the fifth generation in the film industry and I hope that this tradition will continue.

Prithvirajji's son Raj Kapoor and I were roughly the same age-group. He was born in Peshawar but did not study there. He studied in Peshawar for some time, and then went to Calcutta and then finally came to Mumbai. I think that Raj was the one who contributed the most to cinema, out of the entire family. He left studies midway and trained for five years in film direction. He acted as an assistant to a lot of well-known directors, which is why his grip on cinema was more than that of a mere actor. Which is why compared to others in the Kapoor clan, his contribution is most significant.

Perhaps not many people know that in this period, Raj studied in depth all aspects of film-making, from the lighting on the sets and sound effects to music and direction. This knowledge is clearly reflected in all those films which were appreciated not just by the critics but the general public at large. The Prithvi theatre too played an important part in bringing out the best of Raj's talents. In 1944, Raj began learning the 'backstage' tricks from his father the effect of which was visible in Raj's film career. In the Prithvi production of Shakuntala he remained an assistant, but in the next play, Deewar, he got an opportunity to appear on the stage in a short role. And then came the famous production of Pathan, where his important and forceful portrayal of Bahadur Khan paved the way for his entree into the film world.

As far as I can remember, Raj began his career with Kedar Sharma's Neel Kamal. This was followed by many small films but Raj wanted to do something else. And it is this something else which led to the birth of R. K. Films and the production of the first film under its banner, Aag.It did not do too well but certainly established Raj as a good film-maker. After a year or so, he directed and produced Barsaat with himself in the main lead. This was a superhit on the box-office. The thrust it gave to Raj's career was the stuff of fantasies. After Barsat, Raj went on to make the film which considerably helped make Indian cinema reach international standards - Awara. The father and son team from India gave the world a unique offering with this film.

I would also like to mention another film without which it is not possible to talk about Raj Kapur, and that film is Teesri Kasam. Lyricist and song-writer Shailendra, acting as the producer, wished to make this film with Balraj Sahni and Nutan, but somehow Raj was finalised on in the end. The writer Renuji was not quite convinced that Raj with his European looks was fit to play the role of the rural Hiraman, but he was satisfied when he was shown some of the rushes. The same happened to Waheeda Rahman who was chosen because Nutan happened to be pregnant. When the film was released, while it was not a hit, everyone agreed that only Raj could have played the role of Hiraman. Raj played a memorable role in Teesri Kasam and the way he managed the bullock-cart and realistically portrayed a villager has not been matched in acting or technique.

Although talking about the contribution of each member of the Kapoor family seems appropriate to me, but I would certainly want to specially mention Shamsherraj Kapoor, whom we know as Shammi Kapoor. This man was known for his unique ways and gave Hindi cinema a number of different type of films. His dance steps and his special dialogue delivery is enough to forever keep him in a special place. Can anyone forget the Yahoo of Junglee?