If the present mood in the Congress persists, more protests are expected in the National Capital and other parts of the country in the run up to 2019 Lok Sabha elections. 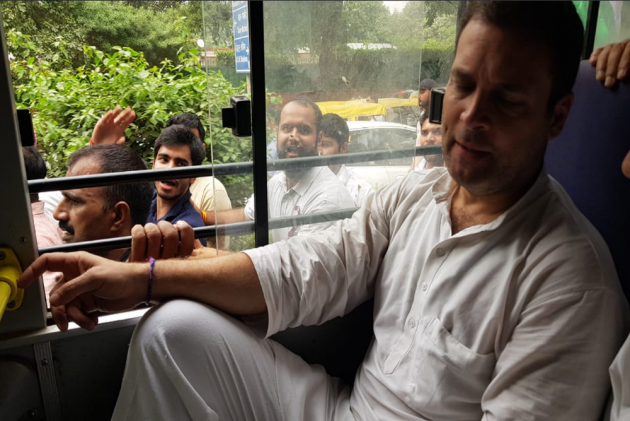 It was high time for Congress president Rahul Gandhi to realise that the best way to fight a political war is the good old fashioned way -- on the streets.

The Twitter warriors came out on the roads, shouting slogans against the BJP and Prime Minister Narendra Modi, protesting against the “disgraceful and unconstitutional attempt" to block an investigation into the Rafale fighter jet deal. Rahul Gandhi led his party men and Opposition leaders as they courted arrest.

Even though the protest caused traffic disruption and jams, it was a welcome sight to see the leaders -- more often seen on TV and heard on social media -- coming out and getting their hands dirty.

Many senior Congress leaders like P Chidambaram, Kapil Sibal, Shashi Tharoor and Jairam Ramesh couldn't be seen at the protest march and perhaps preferred to continue their protest from their drawing rooms and newspaper columns.

As a Delhi Police constable, on duty at the protest site outside CBI office, put it “aaj bahut saalon baad yeh dekha hai(I am witnessing such a protest after many years)". His holster that usually holds his service revolver was empty. He said they were asked to leave them behind and carry lathis, pointing to the long wooden stick in his hand. He didn't get a chance to use it though.

However, if the present mood in the Congress persists, more protests are expected in the National Capital and other parts of the country in the run up to 2019 Lok Sabha elections.

A senior Congress leader says they are not backing off now and plan to organise the “biggest protest” seen in a long time. “Farmer leader Mahender Singh Tikait and his supporters had taken over the Boat Club and Parliament street 30 years ago. We will take over the entire Capital. Modi’s throne needs to be shaken and uprooted,” he says.

The social media war will continue but streets are the newly discovered battleground for Rahul.