The World No.2 took a medical timeout to check the condition of his hand, but returned to play out the match. 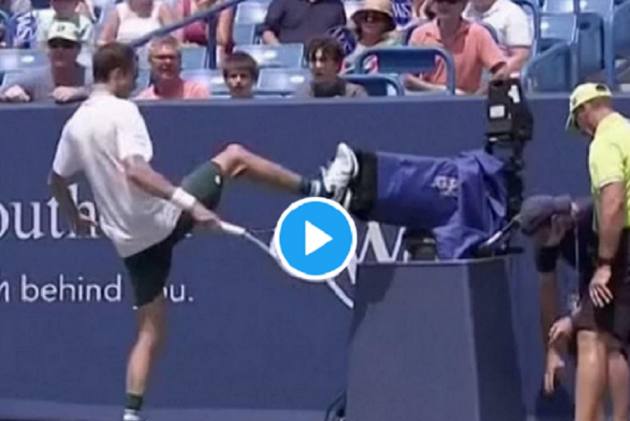 Daniil Medvedev was left fuming in the second set of his 2-6 6-3 6-3 loss to compatriot Andrey Rublev at the Western and Southern Open in Cincinnati, USA. (More Sports News)

While chasing down a baseline shot from Rublev, Medvedev crashed into an on court TV camera.

The contact was with such force, the heavy broadcast camera was knocked over. Medvedev checked the operator was ok and then looked to reset for the next point, before remonstrating with the chair umpire.

"Take it away, I almost broke my hand"

Tennis player Daniil Medvedev - one of the Cincinnati Open favourites - lost his semi-final against Andrey Rublev after colliding with a camera on court.

He kicked the camera in frustration, then complained he "nearly broke his hand". Demanding the camera be removed, the umpire could only explain he wasn't able to make that decision.

The World No.2 took a medical timeout to check the condition of his hand, but returned to play out the match. Momentum shifted after the incident and Rublev went on to claim his first win over Medvedev. (AP)