Will Sourav Ganguly, Jay Shah get an extension? The Supreme Court will decide the fate of top BCCI honchos on Wednesday 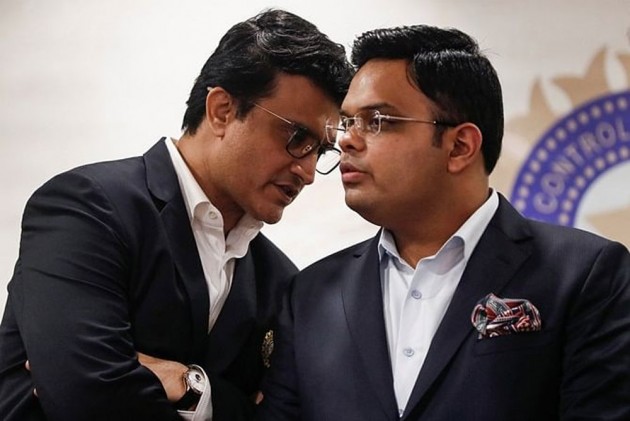 The Supreme Court will decide on Wednesday if Sourav Ganguly and Jay Shah can continue as office-bearers of the Board of Control for Cricket in India (BCCI). (More Cricket News)

According to the BCCI's new constitution, that was approved by the apex court in August 2018 on the basis of reforms suggested by Justice RM Lodha committee, both Shah and Ganguly are ineligible to continue as office-bearers for having already served at state association or the Board or a combination of both for six consecutive years.

Ganguly has less than a week to go as BCCI president while Shah's term as secretary has already ended. The BCCI, which unanimously elected Ganguly and Shah in October last year, filed an application in the Supreme Court in May this year praying that the cooling-off be scrapped.

It now remains to be seen if the special bench, comprising the Chief Justice of India Justice Sharad Bobde and Justice L Nageswara Rao, will uphold the new constitution in letter and spirit or find a way for Ganguly and Shah to remain in control.

To let the status quo prevail till a full court hears the case in post-COVID times, of course, remains a mouthwatering and easy option for the Bench.

Justice AK Patnaik, who had ousted former BCCI chief N Srinivasan in 2014 in the wake of the IPL betting scandal, told Outlook that the "cooling-off" should not be compromised and "it was not about a person but the institution."

"No one is indispensable. Ganguly can always come back after three years. Cooling off is good because then there is no vested interest," Justice Patnaik said, adding that the US government had to change its constitution after Franklin Roosevelt had won an unprecedented third term as President.

While the new constitution is clear about the tenure of officials, BCCI has taken legal opinion from at least two top judges before filing its application end of May, said a well-placed source.

"So the BCCI counsel will come well prepared to pray for an extension for Ganguly and Shah. And don't be surprised if the 'executive' prevails over the judiciary," said the source.

"The Rules also stipulate that no one be permitted to ‘circumvent’ the mandatory provisions of “cooling off” or “ complete ouster after nine years”. Yes, desired and favourable opinions could be obtained from many, but such “obtained opinions” are nothing but circumvention and contrary to basic fundamental objectives of changes so directed by the Apex Court in series of decisions," said the former legal head of the BCCI, Usha Nath Banerjee.

Meanwhile, it is learnt that Tamil Nadu Cricket Association (TNCA) will press for its share of the BCCI grant.

TNCA will be represented by the formidable Kapil Sibal. The BCCI had stopped TNCA's grant because it didn't comply with the new constitution that has strict clauses on the eligibility of officials, tenure and conflict of interest.

Will one more Lodha reform go flying out of the window on Wednesday?

As Justice Patnaik emphasised, let's wait and see how the Supreme Court reacts.