Jurgen Klopp has turned Liverpool back into a major force in English football, much to Mikel Arteta's admiration 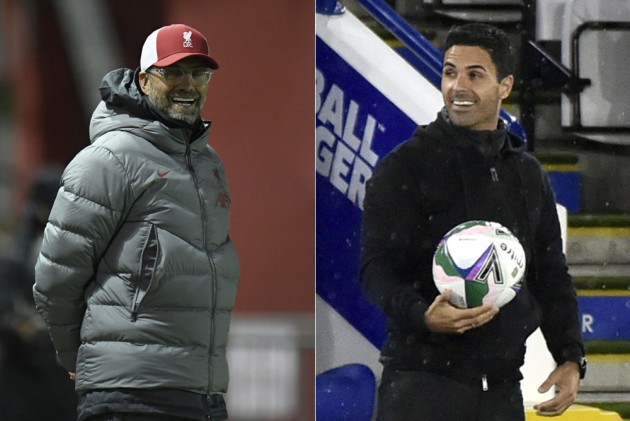 Arsenal coach Mikel Arteta is in awe of the winning culture created by Jurgen Klopp at Liverpool and the German's ability to root out any early signs of complacency, acknowledging they are at a level the Gunners aspire to. (More Football News)

Pep Guardiola's City had broken a host of records en route to the title in the previous two seasons, although Liverpool finished only one point adrift of them in 2018-19.

While much of the focus for Liverpool is on their success last season, they have been consistently exceptional for two years and Arteta could only marvel at the achievement.

The Spaniard presided over a penalty shoot-out victory against the Reds after a 1-1 draw in the Community Shield at the end of August, while they also won the most recent league encounter at Emirates Stadium 2-1, but Arteta accepts Arsenal have a way to go to reach Liverpool's standard.

"It's a different level, they have done it in the Premier League, in the Champions League, that's why the bar is so high, not only them but Man City as well in recent years, that's the level and you have to be able to compete at that level," Arteta told reporters ahead of Monday's meeting at Anfield.

"This is our context and our reality. We want to be one of those teams – the basic things have to be implemented every day.

"First of all, you need a really individual performance by all of them [the players, to beat Liverpool]. You need certain luck, for sure, in moments in the game and [to be] so consistent through the game because, in any moment, they can open you up and [you] get exposed.

"You never give up, another crucial thing against them, you have to expect them to be at their best. If you are always expecting that, the level of attention is higher, focus is higher, and then you are more determined in every ball. That's key I think."

With regards to what is so impressive about Liverpool, Arteta added: "I don't see any complacency.

"They go to any ground, even when they are 2-0, 3-0, 4-0 up and they are going the same way. This is an incredible credit to the coaching team, the culture they have created and the spirit of the team.

"You can see that in all players – not one player plays half-hearted on the day, not very interested and just playing for moments in the game. They just go for it, every single minute of every game for 10 months.

"That's a massive compliment for them."

Arsenal finished 43 points worse off than Liverpool last season and Arteta laughed off the idea that the Gunners will completely wipe that deficit out in 2020-21, though he does hope Klopp's side drop off a little.

"I don't know if in the history of football someone has closed a gap of 43 points if they're on the same level in just a few months," he chuckled.

"Obviously, what you're expecting is [for Arsenal] to be much, much better, more consistent and then they [Liverpool] can drop a little bit, then the gap is not that big.

"But we can control what we can control. That is the level of our performances and our consistency, and do our best to do much better than last year – whatever they do is up to them."

Arsenal have started the new campaign with back-to-back wins over Fulham and West Ham, while they also beat Leicester City 2-0 in the EFL Cup on Wednesday.