It had been reported an ankle issue could keep Lionel Messi out of Argentina's meeting with Paraguay, but that will not be the case 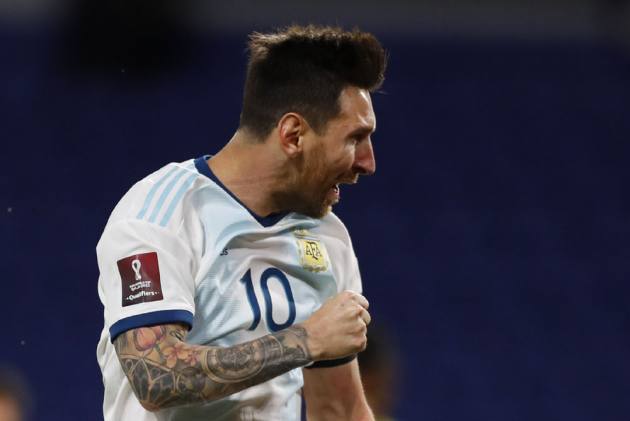 It had been reported that Messi was a doubt for Thursday's meeting with Paraguay at La Bombonera after reporting for duty with an ankle issue.

The six-time Ballon d'Or winner started Barcelona's 5-2 victory over Real Betis on Saturday among the substitutes but came on at half-time and scored twice.

Barca assistant coach Alfred Schreuder said the decision was made because Messi was "not fresh", but Scaloni put any lingering concerns over his fitness to bed.

"Leo trained with us normally. He has been experiencing discomfort in his ankle but it does not prevent him from playing, so for us he is fit and available," Scaloni told a news conference on Wednesday.

"We'll see if anything changes tomorrow, but in principle he's ready to play.

"The truth is that we have had quite a few problems. We still do not have every player. [Lucas] Martinez Quarta just arrived and we will see if he can train with the group this afternoon, and the rest of those who trained differently for various reasons, we hope today to see how they are so we can define the team for tomorrow.

"Without a doubt, it was a very unusual selection – the most difficult we have had. It's typical of what we are experiencing with the number of games being played and the rush there is. We hope to have them all."

Angel Di Maria returned to the Argentina set-up for the first time since last year's Copa America and Scaloni explained the reason for the absence of the Paris Saint-Germain attacker for the opening round of qualifiers in October.

"We had Nicolas Gonzalez and [Giovani] Lo Celso, who got injured after being called up. I would have been in favour of calling up Di Maria, but with everything that was happening it did not seem fair and respectful when he would only have arrived for the second game," said Scaloni.

"This time, Nico Gonzalez had very few minutes, Lo Celso had not got a rhythm and we thought we were not going to make the mistake of not bringing him in again.

"My relationship with him is perfect. We are happy to have him and he is training very well."