Juventus 2-2 Atalanta: Cristiano Ronaldo On The Spot To Spare Serie A Leaders

Cristiano Ronaldo twice scored from the penalty spot as Juventus put an end to Atalanta's winning streak, rallying late to secure a 2-2 draw on Saturday 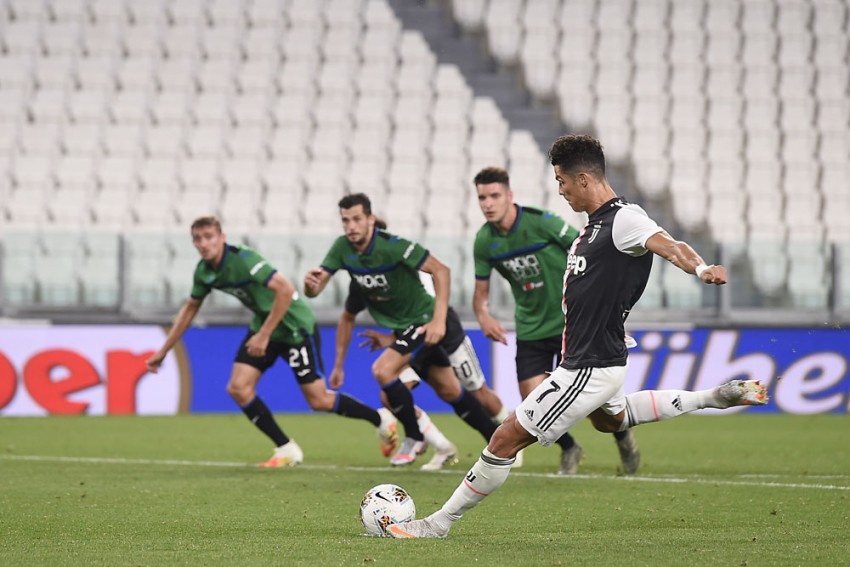 Juventus' Cristiano Ronaldo takes a penalty kick during the Serie A soccer match between Juventus and Atalanta at the Allianz Stadium in Turin, Italy, Saturday, July 11, 2020.
LaPresse via AP
Stats Perform 2020-07-12T08:37:24+05:30 Juventus 2-2 Atalanta: Cristiano Ronaldo On The Spot To Spare Serie A Leaders 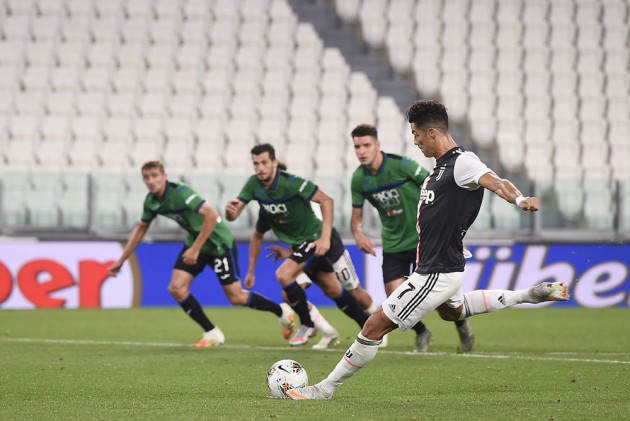 Cristiano Ronaldo twice scored from the penalty spot as Juventus put an end to Atalanta's winning streak, the Serie A leaders rallying late to secure a 2-2 draw on Saturday. (More Football News)

Substitute Ruslan Malinovskiy fired in an 80th-minute goal that had Gian Piero Gasperini's in-form side on course to move into second place in the table courtesy of a 10th straight league win.

Duvan Zapata had put the visitors into the lead as they dominated in the first half, though they were pegged back soon after the break when a handball call against Marten de Roon allowed Ronaldo to level.

Having surrendered a two-goal lead to lose 4-2 at Milan in midweek, Maurizio Sarri's side appeared on course to suffer a second successive loss, in the process cutting their lead at the summit to six points.

However, referee Piero Giacomelli pointed to the spot for a second time when the ball struck Luis Muriel's arm in the 90th minute, allowing Ronaldo to deny Atalanta and leave Juve eight clear of Lazio.

The Portuguese had barely been involved in a first half that saw the away team strike in the 16th minute, Zapata collecting Alejandro Gomez's clever pass to fire past Wojciech Szczesny.

Juve were presented with the chance to equalise when De Roon – in close proximity to the opposing player and with his arms down – was penalised for blocking a cross.

Atalanta seemed to run out of steam as the clock ticked on but, having gone close with a left-footed attempt earlier, Malinovskiy slammed home with his right from the edge of the area to make it 2-1.

Still, there was a late twist to the absorbing tale when Muriel unfortunately left an arm dangling out when defending at a corner, allowing Ronaldo to have the last word and secure Juve a much-needed point.

What does it mean? Draw a positive for champions

When Ronaldo doubled the lead following Adrien Rabiot's exquisite opener in Milan on Tuesday, the Bianconeri appeared to be coasting towards a double-digit advantage at the summit.

Their San Siro collapse was spectacular, and a further defeat at home to a fast-finishing challenger here would have raised serious questions over their stamina down the stretch. Instead, with Lazio losing to Sassuolo earlier in the day, they have a comfortable cushion ahead of the run-in.

Euro vision for the future

A title tilt may be beyond them now with six games remaining, but Atalanta were a joy to watch for the first 45 minutes at Allianz Stadium. The revamped Champions League format will make them dangerous opponents in the competition, starting with a quarter-final tie against Paris Saint-Germain.

Getting a handle on it

Another Serie A fixture, another penalty for handball. Well, two actually. There is no doubting on each occasion that the ball struck an arm, but neither case was a clear example of a deliberate movement. VAR checks were never going to lead to a change of the on-field call either.

- Juventus' current unbeaten home run in Serie A stands at 37 games - only Liverpool have a better such run in the top five European leagues.
- Atalanta became the first side with three players to score 15+ goals in a single Serie A campaign (Muriel 17, Josip Ilicic and Zapata 15) since Juventus in 1951-52.
- Ronaldo has scored 18 league goals in 2020, at least three more than any other player in top five European leagues.
- Since Serie A's restart, Gomez has provided six assists, more than any other players in Europe's big five competitions (level with Lionel Messi).
- Gomez was also making his 300th appearance in Serie A. Since 2010-11, he is one of five players with at least 50 goals and 50 assists in the competition (61 goals and 67 assists).

Juve travel to Sassuolo on Wednesday before hosting a faltering Lazio. Atalanta, meanwhile, take on struggling Brescia on Tuesday.