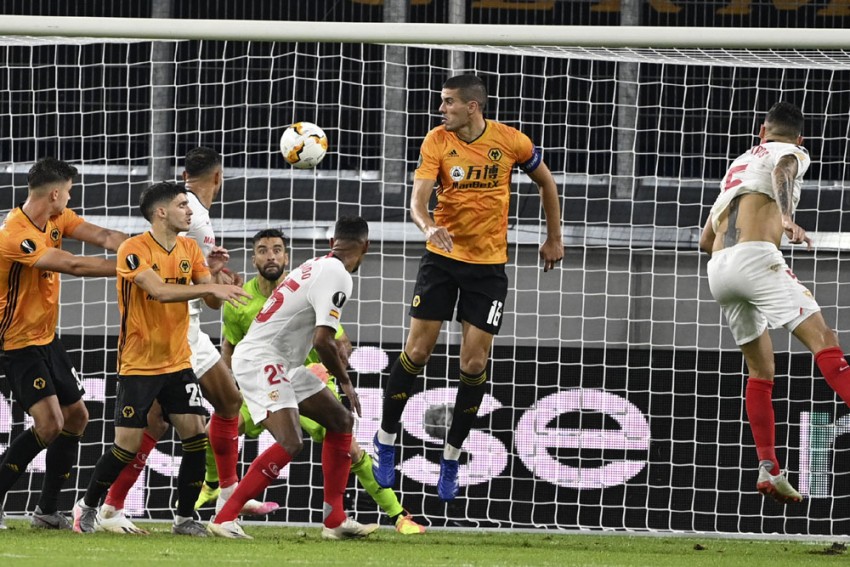 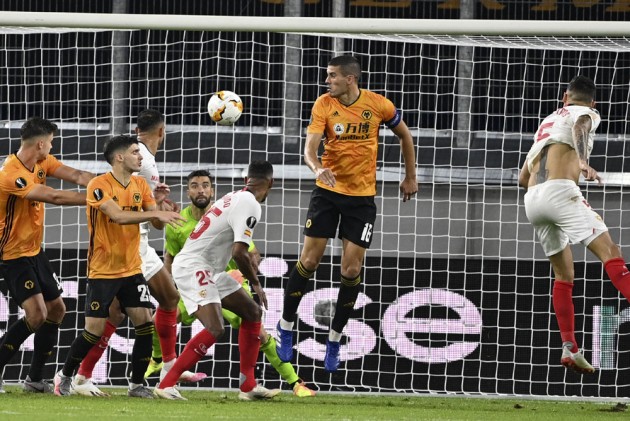 Sevilla have won the competition in its various guises a record five times and will now face Manchester United on Sunday for a place in the final.

It may have been a different story in Duisburg had Jimenez converted from 12 yards but Yassine Bounou made a save and Ocampos glanced in the only goal two minutes from time.

Wolves, whose European adventure started 13 months and 17 games ago, had too little time to respond and Sevilla saw things through to advance to another continental semi-final.

Our @EuropaLeague journey comes to an end. #WOLSEV

Adama Traore's pace put Sevilla's defenders under pressure right from the off and he won Wolves' 11th-minute penalty after being hacked down by Diego Carlos inside the box.

Jimenez stuttered his run up and Bounou - stood slightly off his line - made a straightforward stop to his left, with Joao Moutinho slicing wide from the rebound.

Sevilla used that scare as a wake-up call but it took until the hour mark for their first real chance - Youssef En-Nesyri poking the ball straight at Rui Patricio after wriggling through.

Jules Kounde and En-Nesyri wasted good headed opportunities inside the six-yard box, either side of Ever Banega testing Patricio from a free-kick.

However, Sevilla's pressure finally told in the closing stages when Banega curled in a cross from the right and Ocampos glanced a header into the bottom-left corner, ending Wolves' marathon campaign in a cruel manner.

What does it mean? Sevilla on course for more European silverware

Sevilla won this competition three years running between 2014 and 2016 and rightly carry the tag of being Europa League specialists.

Now unbeaten in 19 games, and having lost just one of their last nine European knockout ties with English opposition, they will fancy their chances of overcoming United.

Ocampos comes up with the goods

Ocampos has scored some important goals for Sevilla this term - none more so than this late winner, which was his 17th of the season in all competitions but his first in the Europa League.

The left-sided forward did brilliantly to not only meet Banega's cross but to guide it down and away from Patricio into the far corner.

Jimenez was Wolves' penalty hero in the slender last-16 second-leg win over Olympiacos last week but fluffed his lines from 12 yards here.

The Mexican, who had scored all eight previous spot-kicks for Wolves, waited for Bounou to move but the Sevilla keeper pretty much stood still and made the save.

- Sevilla have reached the semi-finals of the UEFA Cup/Europa League for the seventh time – only Inter Milan have reached this stage on more occasions (eight).
- Wolves failed to score in the Europa League for the first time since their opening group game against Braga in September (0-1).
- Sevilla have won all three of their games English opposition at neutral venues, also beating Middlesbrough 4-0 in 2006 and Liverpool 3-1 in 2016.
- Wolves' final shot on target in this match was Jimenez's missed penalty in the 13th minute.
- Ocampos scored his 17th goal of the season in all competitions, with 2019-20 now his outright best scoring season in Europe.
- Bounou, who is Moroccan, is the first African to save a penalty in the Europa League since Rais M'bolhi (Algeria) for CSKA Sofia against Porto in December 2010.

Sevilla meet United in Cologne for a place in the final, where one of Inter or Shakhtar Donetsk await. After an arduous campaign, Wolves have four weeks to prepare for the 2020-21 season.