Inter progressed to the last four of the Europa League win a victory over Bayer Leverkusen, with Romelu Lukaku setting a competition record. 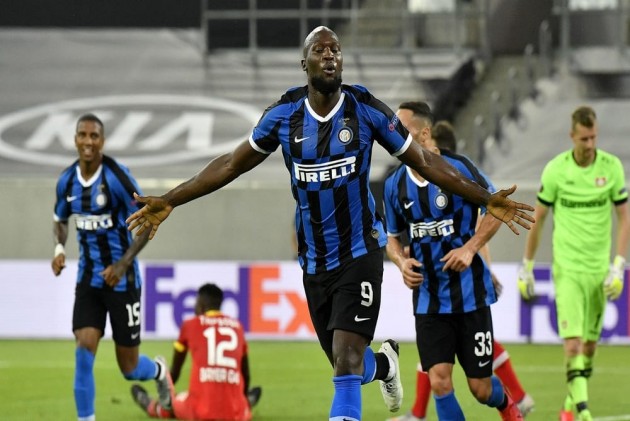 Romelu Lukaku and Nicolo Barella were on target as Inter saw off Bayer Leverkusen 2-1 to reach the Europa League semi-finals.

Inter led 2-0 inside 21 minutes at Merkur Spielarena in Dusseldorf – Barella opening the scoring before Lukaku squeezed in a record-setting goal.

Leverkusen star Kai Havertz pulled one back three minutes later, with VAR then denying Lukaku – the first player to score in nine successive UEFA Cup or Europa League games – the chance to double his tally from the spot, a fate he would suffer again in second-half stoppage time.

Alexis Sanchez went close to marking his first appearance since signing permanently for Inter with a goal midway through the first half, but the Nerazzurri's blistering start ultimately proved enough to book their semi-final place.

In a frantic opening, it was Inter who went ahead after 15 minutes – Barella sending a brilliant outside-of-the-boot finish into the bottom-left corner.

Barella latched onto a rebound from a blocked Lukaku shot for Inter's opener, but the former Manchester United striker had his goal six minutes later when he held off Edmond Tapsoba and turned in a low finish.

Lukaku squandered a golden chance to extend Inter's lead moments later, and he was swiftly made to pay as Havertz drilled in from close range.

Momentum appeared to have swung back in Inter's favour within two minutes – Daley Sinkgraven adjudged to have handled in the area – but referee Carlos del Cerro Grande changed his decision after consulting VAR.

Roberto Gagliardini might have restored Inter's two-goal cushion following the restart, had Lukaku not got in the way of his effort.

Lukas Hradecky made fine saves to deny Sanchez – who played on through an apparent hamstring injury suffered late on – and Victor Moses as Inter pressed for a third, though it looked as if they would have the final say when Christian Eriksen was awarded a penalty.

However, VAR worked against Inter for a second time, the referee overturning his initial decision due to an accidental handball from Barella but, fortunately for Inter, they were not made to rue the call.

What does it mean? Inter looking strong

Leverkusen were arguably the strongest side Inter would have to face in this side of the draw, and the Nerazzurri have passed the test. While Shakhtar Donetsk or Basel will be no pushovers, Conte's side should be confident of reaching their first European final since 2010.

With his brilliantly taken goal, Lukaku cemented himself in the Europa League record books, adding another accolade to what has been a fantastic first season with Inter.

With Sven Bender suffering a late injury, Peter Bosz was left without one of his most experienced players, and the former Borussia Dortmund man was certainly missed as Inter got at Leverkusen's youthful centre-back pairing of Jonathan Tah and Tapsoba time and time again.

- Leverkusen have been eliminated in each of their last three quarter-final appearances in the UEFA Cup/Europa League, having previously exited against Osasuna in 2006-07 and Zenit St Petersburg in 2007-08.

- Inter are the first Italian team to reach the semi-finals of the Europa League since 2014-15 (Napoli and Fiorentina), while two of the four Italian teams to do so in the competition have been managed by Antonio Conte (also Juventus in 2013-14).

- Romelu Lukaku has been directly involved in nine goals in European competition for Inter this season (six goals and three assists); excluding qualifiers, the most by a player for the club in a single season since Samuel Eto'o in 2010/11 (13).

- Among players aged 21 or under within the top five European leagues, only Kylian Mbappe (69) has scored more goals than Bayer Leverkusen's Kai Havertz (38) across all competitions since the start of last season.

- Inter's Ashley Young made his 50th appearance in major European competitions (excluding qualifiers), while he has finished on the winning side in exactly half of those games (25/50).

Shakhtar or Basel, who play on Tuesday, will face Inter on August 17. Leverkusen, meanwhile, will now prepare for the new Bundesliga season, which starts in September.