Players from both teams halted play after 10 minutes as the 25,000 fans rose for a minute of thunderous applause in tribute to Christian Eriksen, who wears the No. 10 shirt for Denmark's national team 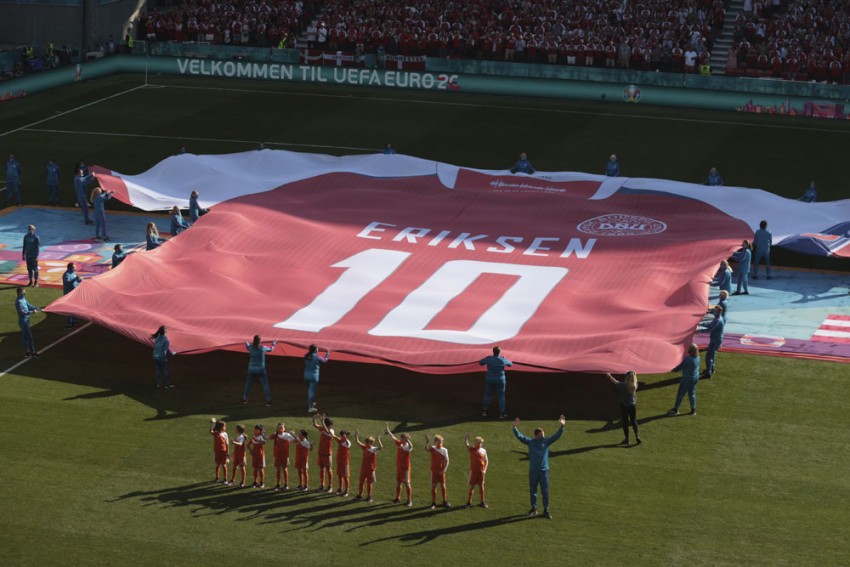 A giant jersey in support of Danish player Christian Eriksen is displayed ahead of the Euro 2020, Group B match between Denmark and Belgium at the Parken stadium in Copenhagen, Denmark on June 17, 2021.
Hannah McKay/Pool via AP
Agencies 2021-06-17T23:56:32+05:30 Euro 2020: Belgium Beat Denmark 2-1 As Players, Fans Pay Tribute To Christian Eriksen 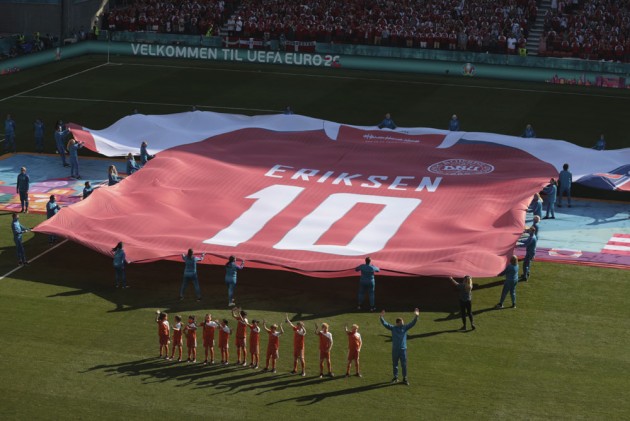 Substitute Kevin de Bruyne set up one goal and scored the winner himself to give Belgium a 2-1 victory over Denmark in a European Championship game marked by an emotional tribute to Christian Eriksen in the first half.

De Bruyne came on after halftime for his first appearance since sustaining a facial fracture in the Champions League final and squared the ball for Thorgan Hazard to equalise in the 55th minute. He then scored in the 71st with a low shot from outside the area.

It was Denmark's first game since Eriksen's collapse, and the hosts started at a furious pace at a raucous Parken Stadium. Yussuf Poulsen scored with a low shot inside the far post in only the second minute.

Players from both teams then halted play after 10 minutes as the 25,000 fans rose for a minute of thunderous applause in tribute to Eriksen, who wears the No. 10 shirt for Denmark's national team.

The players joined the applause as well, as did referee Bjorn Kuipers.

Eriksen remains in a nearby hospital after suffering cardiac arrest in the team's opening game against Finland.

The victory gave Belgium a spot in the round of 16. Denmark can still advance with a win over Russia on Monday if the Belgians beat Finland.

It had all started so well for Denmark.

Carried forward by the largest crowd in Denmark since the government eased pandemic restrictions, the hosts kept pushing forward in wave after wave after the early goal.

Play resumed at a more normal pace after the tribute to Eriksen, but Denmark still had the better chances in the first half.

Things changed completely when De Bruyne came on after the break.

Denmark coach Kasper Hjulmand had said the team's strategy for keeping Belgium striker Romelu Lukaku quiet was to make sure he didn't get the ball in the first place.

And Denmark largely succeeded until the 55th, when Lukaku burst forward down the right flank before passing to De Bruyne. The Manchester City midfielder went around a defender inside the area before teeing up Hazard, who slotted it past a scrambling Kasper Schmeichel.

Eden Hazard, Thorgan's brother, then came on and set up De Bruyne for the second goal. De Bruyne ran toward the Belgium fans but didn't celebrate the goal, pushing in hands down in a calming motion out of respect for Eriksen.

Martin Braithwaite had Denmark's best chances for an equaliser, but his shot was saved by Thibaut Courtois in the 75th and his header glanced against the crossbar in the 87th.