Real Kashmir FC, who played out a goalless draw against FC Goa at Kalyan on Saturday, will face Mohun Bagan in the semis of Durand Cup. 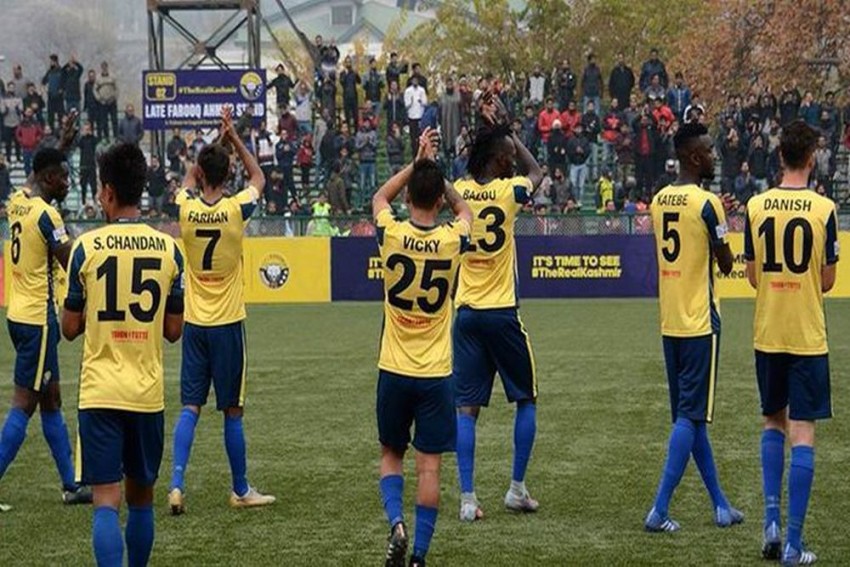 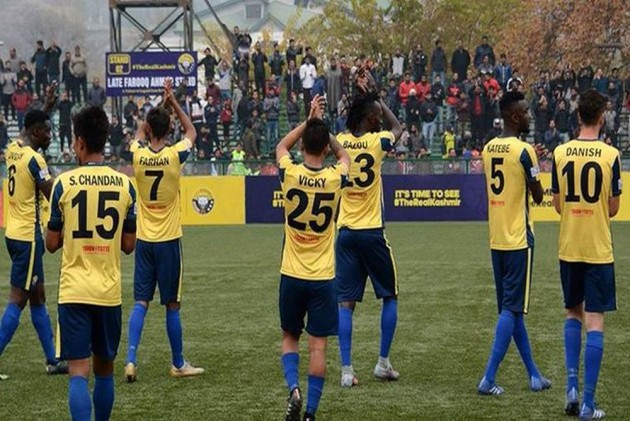 Both teams created a flurry chances on a soggy surface which wasn't conducive for good football but none managed to open their account. Real Kashmir however needed a draw to enter last four and they topped group C with seven points -- two wins and a draw.

On a day of missed chances, Real Kashmir's 21-year-old goalkeeper from Phurba Tempa Lachenpa was the star as he thwarted some fine chances from the developmental outfit of the Indian Super League.

The David Robertson-coached side will face Mohun Bagan in the semifinals at the Salt Lake Stadium on August 21, seven months after they defeated local heavyweights 2-1 at the same venue finishing third in the I-League.

"We don't want to involve politics but this win is for the family members back home and the people of Jammu and Kashmir. We all are excited to make the semifinals. We all have celebrated with great fervour," an elated Real Kashmir manager Yasir Malik told PTI.

Fighting all odds back home after the Centre revoked Article 370, the Real Kashmir squad assembled for the first time this season at their team hotel in Kalyani, about 60 kilometres from Kolkata.

With a lockdown in the Valley, the team was devoid of any practice and the worse was in store as the team members from the region could not reach out to their respective families with the imposition of section 144 of the Code of Criminal Procedure as the state, which will now be bifurcated into two Union Territories, remained on the edge.

It was only on the Eid when the team members managed to speak to their family via team co-owner Sandeep Chattoo's phone.

"Everyone is fine back home and players are a bit relaxed after talking to their family members. But network has not restored fully. We all stay in far-off places and nobody's phone network is restored," he said.

He said the players were a bit relaxed after talking to their respective families.

"We all have come to play here. Our motto is to win the Durand Cup and that's it. But they are a bit relaxed now."

On facing Mohun Bagan at Salt Lake Stadium twice in seven months, he said: "We are confident. We have played with them and beaten them 2-1. Now we will see them on the ground. The team who will play well will win."

"This is our pre-season tournament as only here the team assembled and trained for the first time. The coach is watching everyone's performance and it's for the boys to prove themselves ahead of the long gruelling season."

The team manager blamed the ground condition for not able to score a winning goals.

"We never played for a draw. The boys desperately wanted to win. We played full strength. But the ground condition was not proper, there was a lot of mud and ground was filled with water. The ball too was stopping. We had to play with caution."

Local boy Ritwik Das got the first chance of the match in the sixth minute but his header went over horizontal.

Gnohere Krizo set up a fine ball to Singam Subhash Singh but he shot it high in the 37th minute.

In the 71st minute, Goans had a fine great long-range attempt by Leander D' Cunha but only to be blocked by an alert Phurba under the bar.

In the 73rd minute, Subash surged from the left flank but was blocked by the opposition goalkeeper for a corner.

Real Kashmir's star striker Danish Farooq got a fine opportunity in the 64th minute but his header went straight into the hands of the opposition goalkeeper.

FC Goa had their best chance in the 23rd minute when Liston Colaco ran down from the left flank and set it up for Lalawmpuia but his shot hit the woodwork followed by a goalline save from Khalid Qayoom to ensure a clean sheet for the Snow Leopards and a passage to the semi-final.