Cheteshwar Pujara, who had amassed 521 runs during India's historic 2-1 Test series win in Australia in 2018-19, failed to rotate strike and it created pressure on others 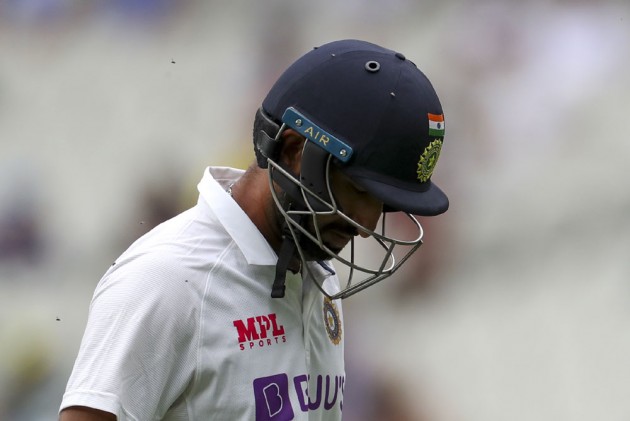 Cheteshwar Pujara was "scared to play shot" and just looked to survive rather than taking the fight to the Australians, former skipper Allan Border said on Saturday, slamming the Indian's batting tactics on day three of the third Test.

Pujara's slowest Test half-century, a painstaking 50 off 176 balls handed Australia control of the match in which they now have overall lead of 197 runs.

"He (Pujara) is almost scared to play a shot, isn't he? He is playing to survive rather than looking to score," Allan Border told foxsports.com.au.

"He's not had quite the same impact this series in that he's taken so long to score his runs, it's like he's stagnated at the crease and it has had a bit of a ripple effect through the Indian batting. They can't seem to get on top of Australia's bowling."

Pujara, who had amassed 521 runs during India's historic 2-1 Test series win in Australia in 2018-19, failed to rotate strike and it created pressure on the likes of Ajinkya Rahane (22 off 70 balls) and Rishabh Pant (36 off 67 balls).

Pat Cummins (4/29) returned with a four-wicket haul on an unresponsive track and was well-supported by Josh Hazlewood (2/43) and Mitchell Starc (1/61) as Australia dismissed India for 244 on day 3.

"Credit where credit is due, the bowling has been very good and Australia haven't allowed them to get away," Border said.

"That's half the battle as well, the guy's been hard to get out but if the scoreboard is not moving, eventually you get your rewards."

Former Australian skipper Ricky Ponting too was critical of Pujara's approach and asked him to "be a bit more proactive with his scoring rate because I felt it was putting too much pressure on his batting partners."

Former Australian all-rounder Tom Moody, however, believes the onus was on skipper Rahane and Hanuma Vihari to keep the scoreboard ticking as Pujara was just playing his natural game.

"I don't think Pujara at all is the culprit in this case, generally in his career he has played his brand of cricket and it would be unfair for the team to be asking him to be playing something which is totally out of his natural style,"Moody told ESPNcricinfo.

"I will put it down to Rahane and Vihari, who came in and scored 4 off 38 balls. To me, both these players need to get the game moving, understanding the role that Pujara has done not only in this series but every other series that he has played Test cricket for India."

Moody said India would never win this Test by trying to wear down the hosts.

"It's got to be an understanding in a team environment, that look for us to compete and build on the momentum that we had in Melbourne ... we got to be aggressive," he said.

"We got to take on the Australians and ensure that we are positive in our intent, whether it is just running between wickets, or whatever it might be, there needs to be a clear game plan.

"... the occupation of the crease was not the right game plan, if that's what they were trying to do, is just to put the Australians on the field for as long as possible and wear them down because I didn't see that way India going to win this Test match."

India will have to bat out of their skin to save the Test with Australia ending day 3 with a 197-run lead.

Marnus Labuschagne (47) and Steve Smith (29) were at the crease with Australia at 103 for 2 when the stumps were drawn on Saturday.