After a seven-year drought, Atletico Madrid are LaLiga champions again as they successfully held off the challenge of Real Madrid 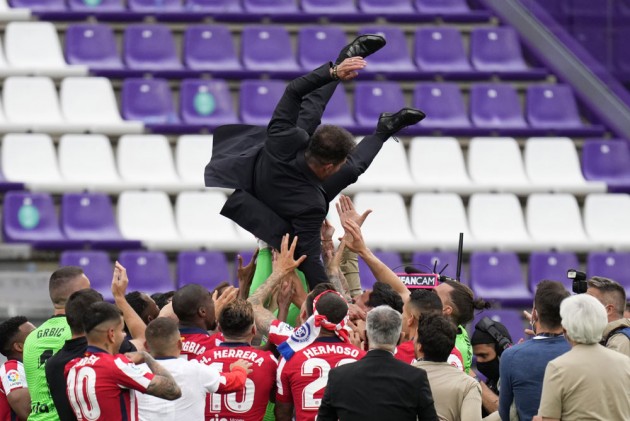 Much like on that occasion, Atletico had to wait until the final day of the season to make absolutely sure of their triumph, something few would have predicted of their campaign not too long ago.

Simeone's men have been top for much of the season, granted, but in recent months their position at the summit became precarious.

It's fair to say they have ridden their luck over the past few weeks, including on Saturday as they had to come from behind at Valladolid, but their supporters will be fine with that after they eventually brought it home.

Following their title-clinching victory, we look back on the other matches that have been crucial in their success.

Okay, maybe it's a little over the top to suggest Atletico's very first game of the season had much bearing on winning the title, but the manner of it was seriously impressive and set the tone for the rest of the campaign – even if they did draw their next two matches.

It was a particularly memorable outing for Luis Suarez, who, cast aside by Barcelona, netted a brace as he became the first player this century to score and assist on his Atletico debut.

Atletico romped to what was their biggest opening-day win under Simeone, and they've hardly looked back. 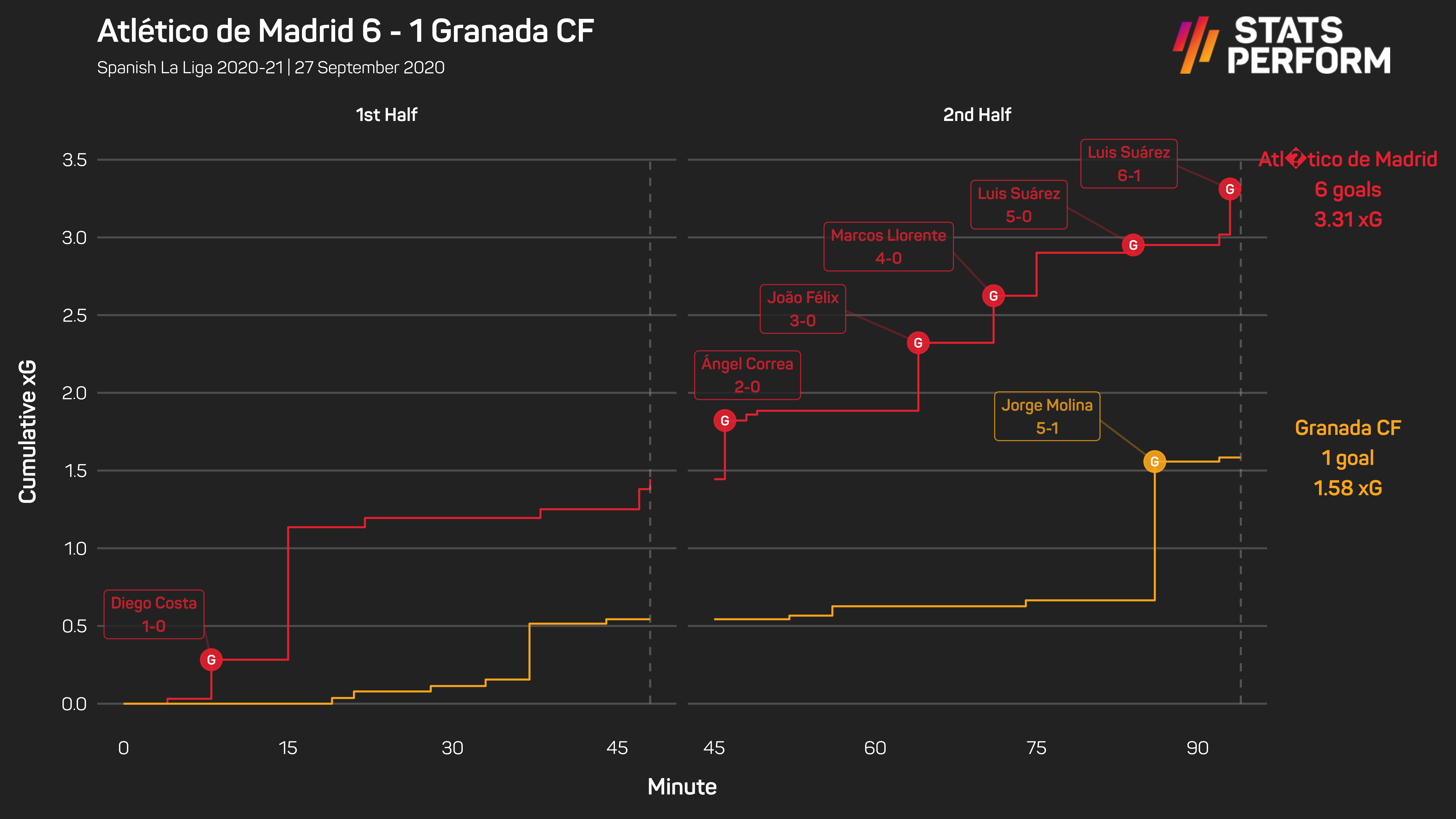 Barca were in turmoil at times in the first half of the season and that gave Atletico the perfect opportunity to gain a psychological edge. With Suarez missing against his former club, the visitors might have fancied their chances, but Atletico prevailed to claim their first league win over the Blaugrana in more than 10 years.

Yannick Carrasco got the all-important goal as Atletico set a club record of 24 LaLiga games unbeaten, while Barca were left with just 11 points from their first eight league matches, their worst start to a season since 1991-92.

One aspect of Atletico's trip to Ipurua in January will be recounted time and time again by statisticians, and it's not that they came from behind to win. No, the most fascinating element of this game was that it was Marko Dmitrovic who broke the deadlock from the spot, becoming the first goalkeeper to score in LaLiga since Dani Aranzubia in February 2011. The last stopper to net a penalty was nine years before that. 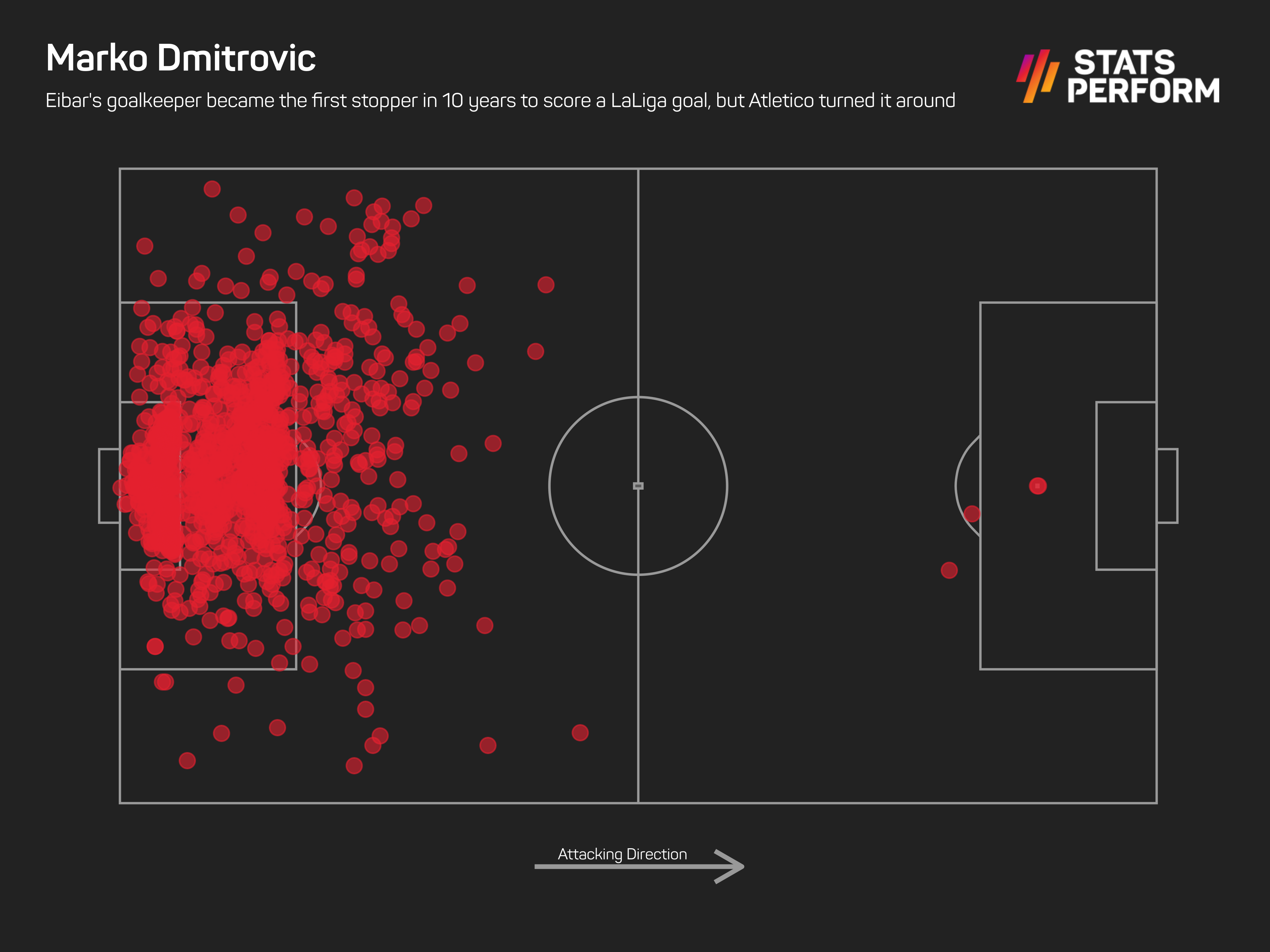 But it was Atletico who had the last laugh. Suarez scored both of their goals, including a last-gasp penalty, to spare Los Colchoneros' blushes.

While a win away to Eibar – who've since been relegated – may not look like much, who's to say that having someone as reliable as Suarez to convert a late penalty under pressure wasn't the decisive moment in their title quest?

At the halfway point of their season, Atletico were seven points clear at the summit with two games in hand on Real Madrid in second. They had been devastatingly effective in the first half of the season as they collected 50 points, but in the 18 matches since, that haul has plummeted to 33.

Atletico have been far more erratic since the turn and their trip to Camp Nou looked especially uncomfortable, as a defeat would have seen Barca go above them in the table, while any result other than a win will have given Real Madrid the initiative.

Marc-Andre ter Stegen impressed for Barca in the first half, making six saves, though clear-cut chances weren't exactly a regular occurrence, neither side even managing to reach 1.0 xG (expected goals) over the course of the game. Atletico faced a nervous wait to see if their neighbours would capitalise… 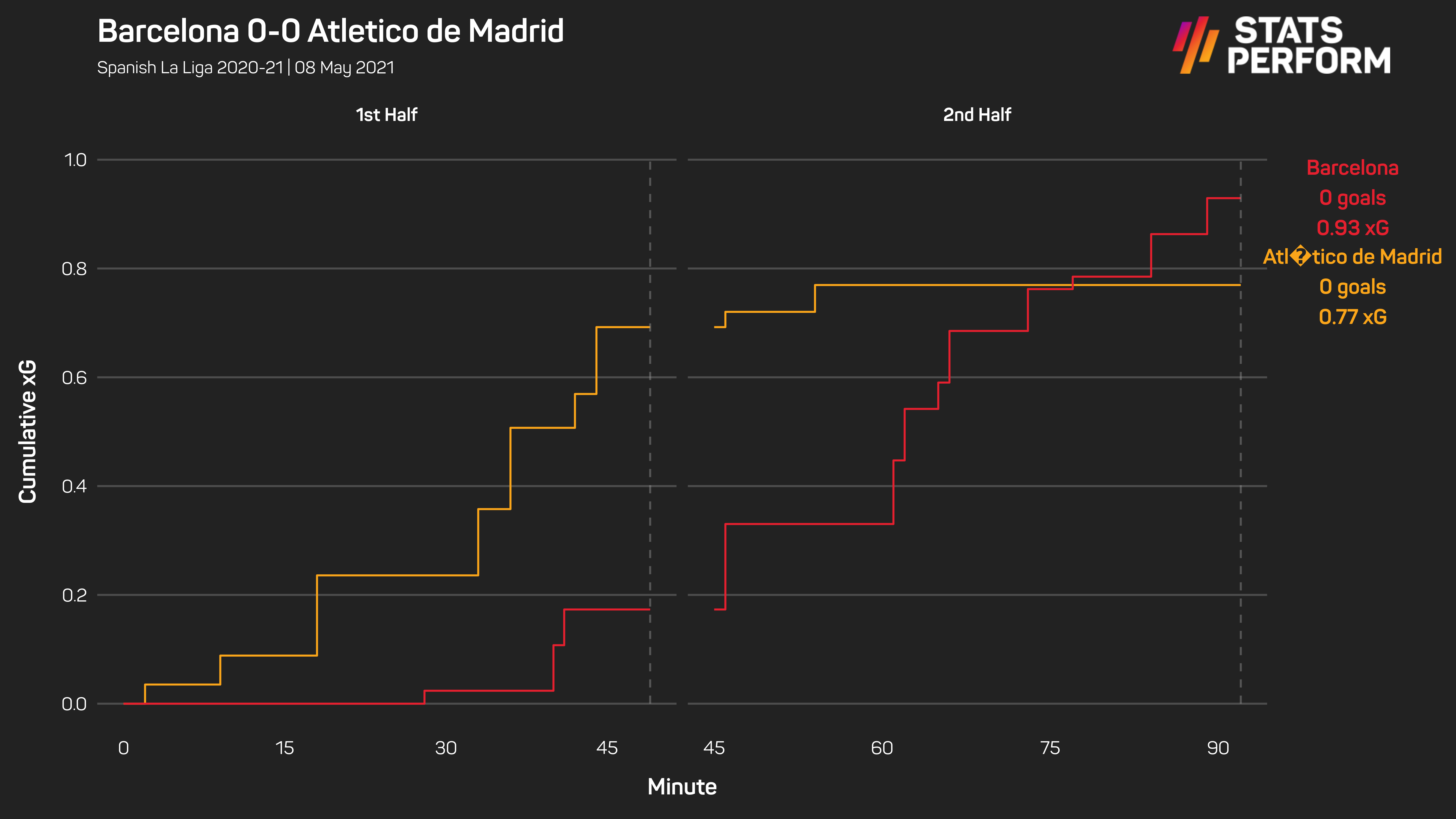 The second part to a title-race double-header across May 8 and 9, Madrid and Sevilla both still fancied their chances of sealing the crown at this point, and what an occasion it was in Valdebebas.

Madrid looked to be heading to a remarkable defeat when they had a late penalty overturned because Eder Militao was controversially deemed to have handled in his own area at the start of the attack, with Ivan Rakitic converting the spot-kick to put Sevilla in front for the second time.

Toni Kroos saw a long-range shot deflect in off Eden Hazard deep into stoppage time but it was not enough – winning the title was no longer in their own hands. 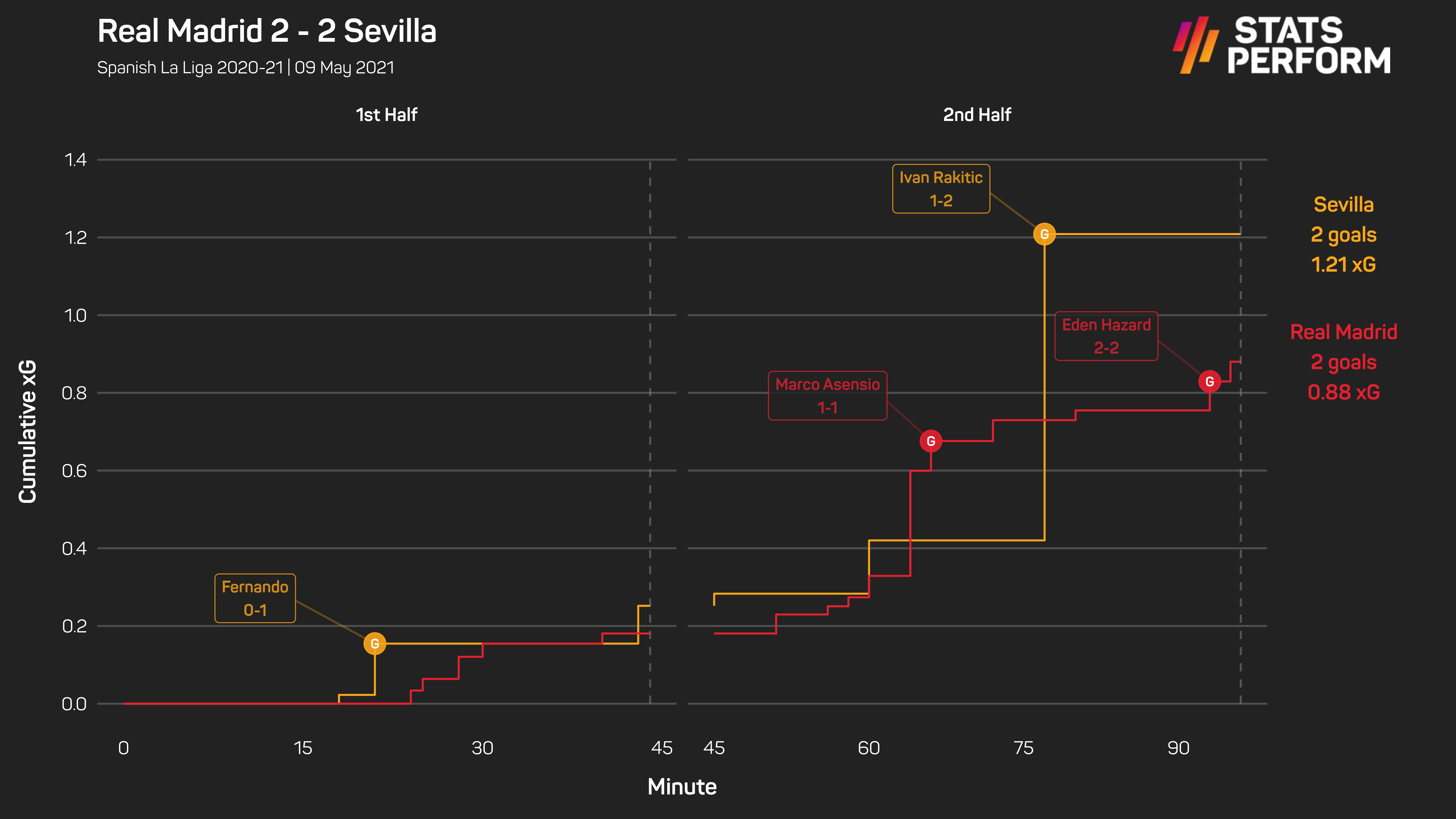 The title looked to be slipping from Atletico's grasp again last weekend, as Ante Budimir's 75th-minute header put Osasuna in front shortly after Madrid had gone 1-0 up at Athletic Bilbao – at this juncture Los Blancos were top by a point.

Renan Lodi levelled for Atletico with 82 minutes on the clock but that wasn't going to be enough, as they would still sit behind Madrid due to their inferior head-to-head record. They needed another. 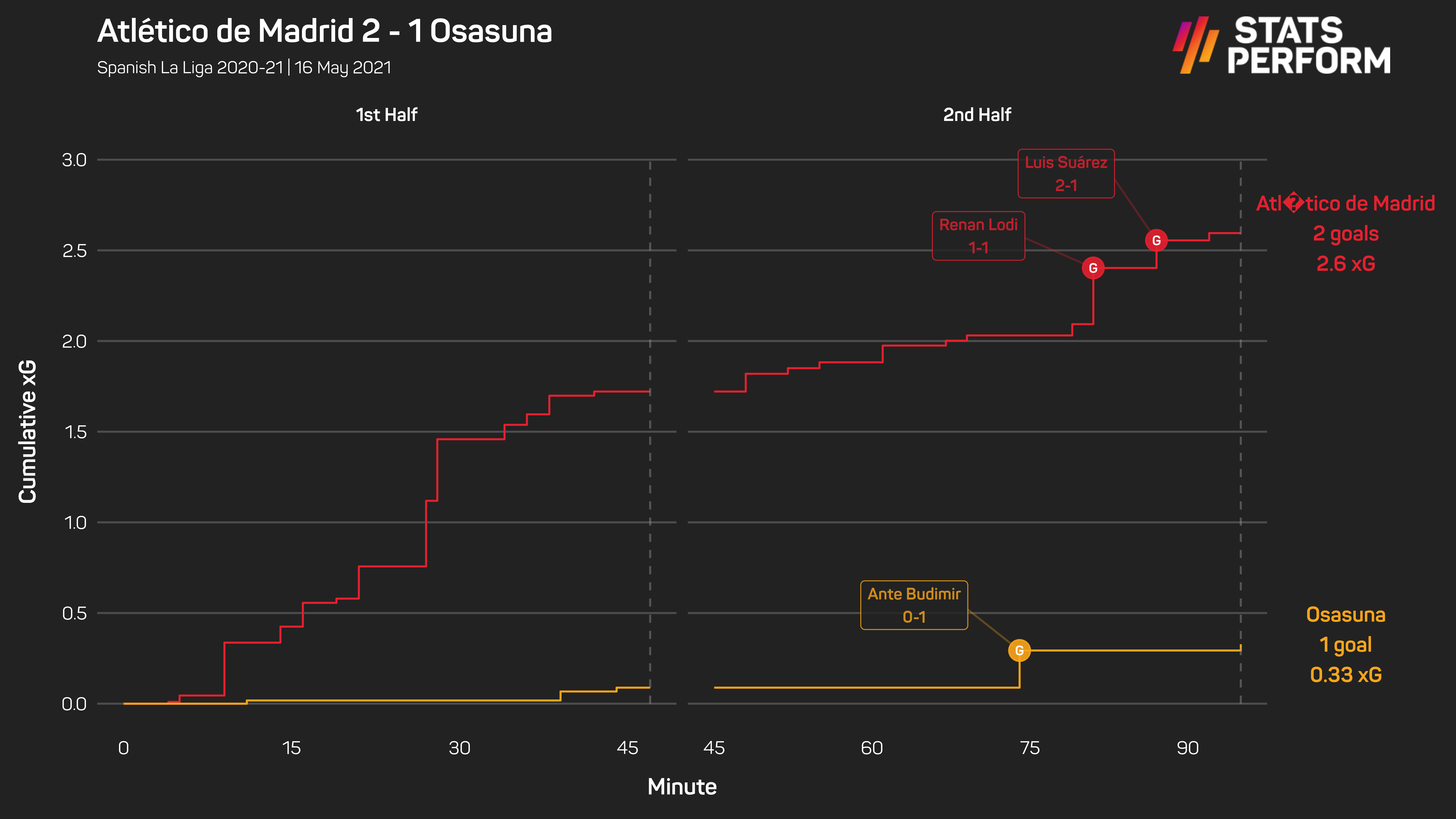 With two minutes left, Suarez ended something of a mini-drought to clinch victory, his 20th goal of the season, a haul that had secured Atletico 19 points at that point – only Sevilla's Youssef En-Nesyri could match that at the time.

The goal sparked joyous celebrations on the pitch, Atletico's bench and in the stadium's car park where a group of supporters gathered.

It left them with the two-point advantage over Madrid that was required heading into the final day, with Simeone's men subsequently refusing to throw it all away against Valladolid, despite falling behind once again. 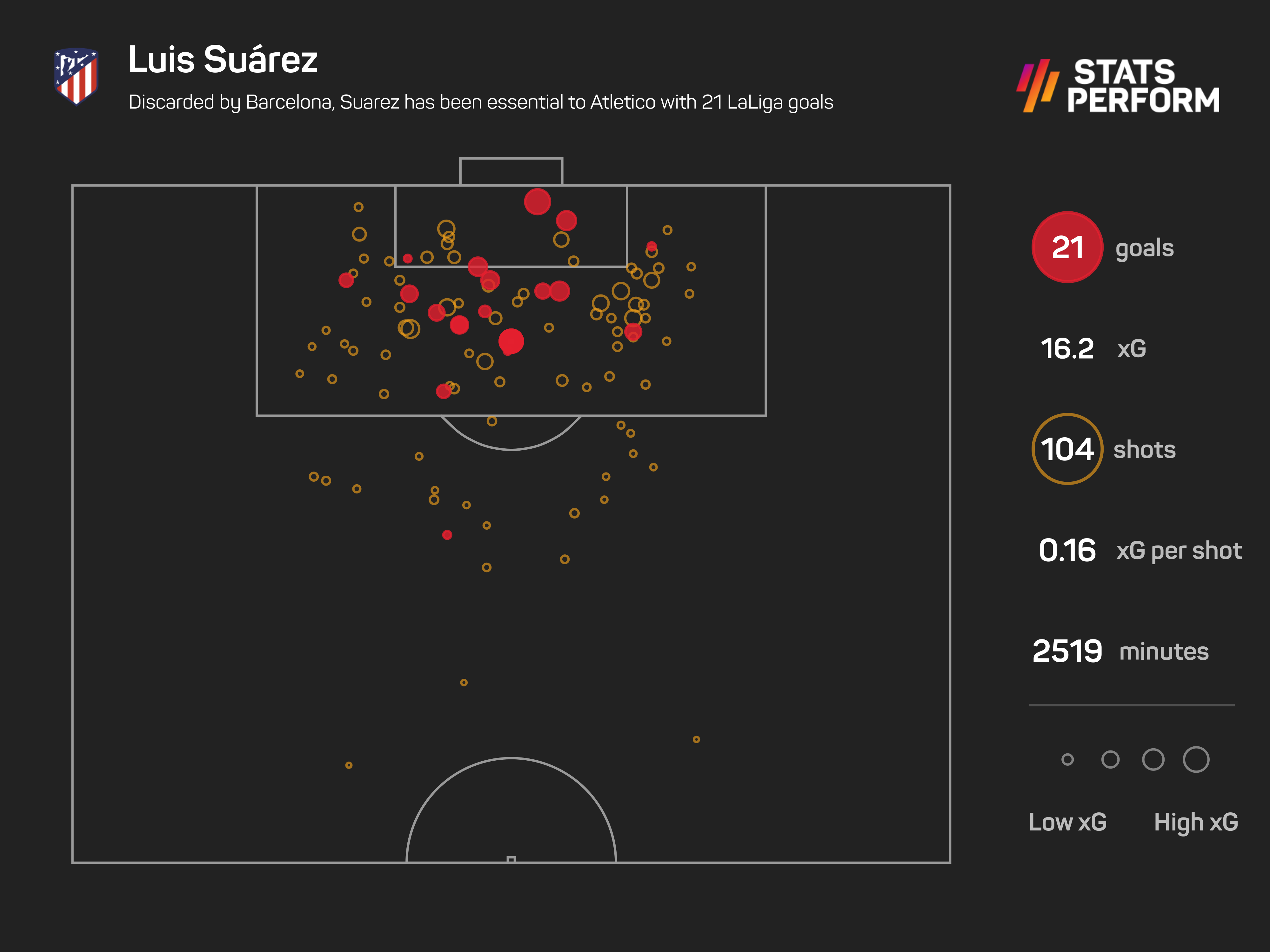 Oscar Plano put Valladolid in front in the first half, but Atletico rallied after the interval as Angel Correa netted a brilliant equaliser and Suarez sealed the win 23 minutes from time, Madrid's own turnaround against Villarreal elsewhere ultimately an irrelevence.

Atletico are the champions.