A Monster Bike and World Record

The ASC Tornadoes team built a monster bike, using a 500cc Royal Enfield as the base machine to create a world record of mounting 58 men on a single bike that remains unbroken till date One motorcycle. 58 men. 1,100 metres. 2 minutes and 14 seconds. These are just not some random numbers. They, in fact, represent the burning desire of a bunch of men to rise above the mundane to achieve the impossible. In 2017, the renowned Bengaluru-based stunt display team of the Army Service Corps (ASC), Tornadoes, set out to achieve what was thought to be impossible: to mount of human formation of 58 men on a single motorcycle, in an attempt to create a new Guinness World Record. It was an audacious challenge to undertake. It meant breaking new grounds. 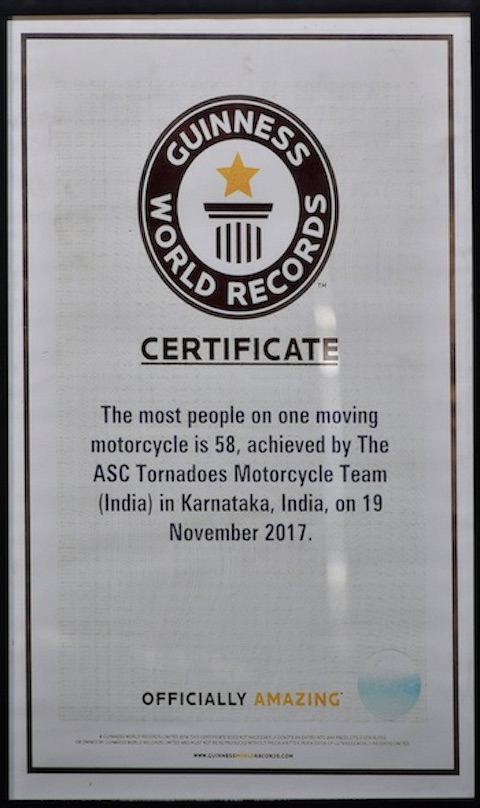 To begin with, the team needed a suitable motorcycle that could haul a few thousand kilos. ASC Tornadoes settled for a 500 cc Royal Enfield Standard bike as the base machine. However, in order to haul the weight of 58 men, the bike would need extensive modifications and fabrication of special platforms that needed to be rigged to the bike. The job for preparing the motorcycle fell on Havaldar Arun Kumar, who also serves as the technical in-charge of the team.

The task of prepping the motorcycle for the challenge began by modifying the fuel delivery system. The carburettor was replaced with a fuel-injection system for better delivery and more efficient burning of the fuel mixture in the combustion chamber. In order to bear the load of 58 men, most stress points on the motorcycle needed extensive modification.

These included replacing the stock T-joint of the bike’s steering system with a high-strength metal component that would be able to bear the load. The front-loading of extra men on the bike implied that the wheel rims had to be strengthened. This was achieved by welding metal rods to the hub and the inner arch of the rim at regular intervals in addition to the spokes. The conventional spring-loaded damping system inside the front forks was replaced by rods and valves in a trade-off between the handling of the bike and load-bearing capacity.

The rear section of the Royal Enfield bike chosen for the purpose also underwent heavy modification. It needed a wider and a bigger rim to mount a wider section tyre that came from the Ambassador car. This meant a new swing arm had to be fabricated. The rim was further strengthened by using metal rods, just like it was done for the front wheel. The rear suspension system gave way to a rigid metal plate that was welded to the frame. But the biggest challenge was to mount that three-deck metal platform that was rigged around the bike on which the men would stand. It took some amount of trial-and-error to get the geometry of the platforms correct for uniform weight distribution around the motorcycle. “We had to do a lot of testing whenever we put a new part on the bike. It was important to see how the bike would run under the condition,” says Hav. Kumar.

The designing of the fabricated parts were all done in-house by the ASC Tornadoes team. “First we would draw the sketches and then develop the parts, modifying them in the process where needed,” says Kumar.

Once the bike was ready, they tested it out extensively, before going in for the record attempt. Finally, in late 2017, 58 members of the ASC Tornadoes team were set a new world record of mounting 58 men on a single motorcycle on the Yelahanka airstrip, traversing a distance of 1,100 metres create a new Guinness World Record.