An associate professor from Kohima, Dr. Buno Iralu, shares with us the grief of losing her brother who was killed in 1998 owing to the draconian Armed Forces Special Powers Act (AFSPA),1958.

On some mornings, you find strangers who are kind enough to share their grief, their anger and their memories with you. Buno is in Kohima. I have only read her poem, which someone sent to me. It made me sad about a death that happened many years ago.

I have never met Buno but when I asked her if she would tell me about her brother who was killed in Nagaland 23 years ago, she told me her brother was not much into photo-taking in those days. There are some photos but they aren’t very clear, she said. Buno told me she isn’t from Oting, where 14 civilians were killed by forces on December 4th, but her poem is about everyone. Poems are evidence. Of crimes and destruction.

She said she will write about her brother. Here’s her account.

My poem is about my brother who was killed in 1998. He was a young father who was also pursuing his MA in Shillong then. He had come home for the Puja break. He and his friend Robert Belho were out on a leisure car ride one afternoon, when the Indian army suddenly started shooting at them as soon as they went past the army camp area in Dimapur town. My brother Aja died on the spot as a result of receiving multiple shots on his back and head. His friend Robert, who was driving, was seriously injured. After being crippled, he survived for a few more years but passed away eventually.

Late Robert said they were not speeding or doing anything unlawful that day. They saw army men standing by the roadside but that was a common sight for anyone in this part of the world (even now). As soon as they felt the shots, they stopped the car but the army men continued shooting at them. 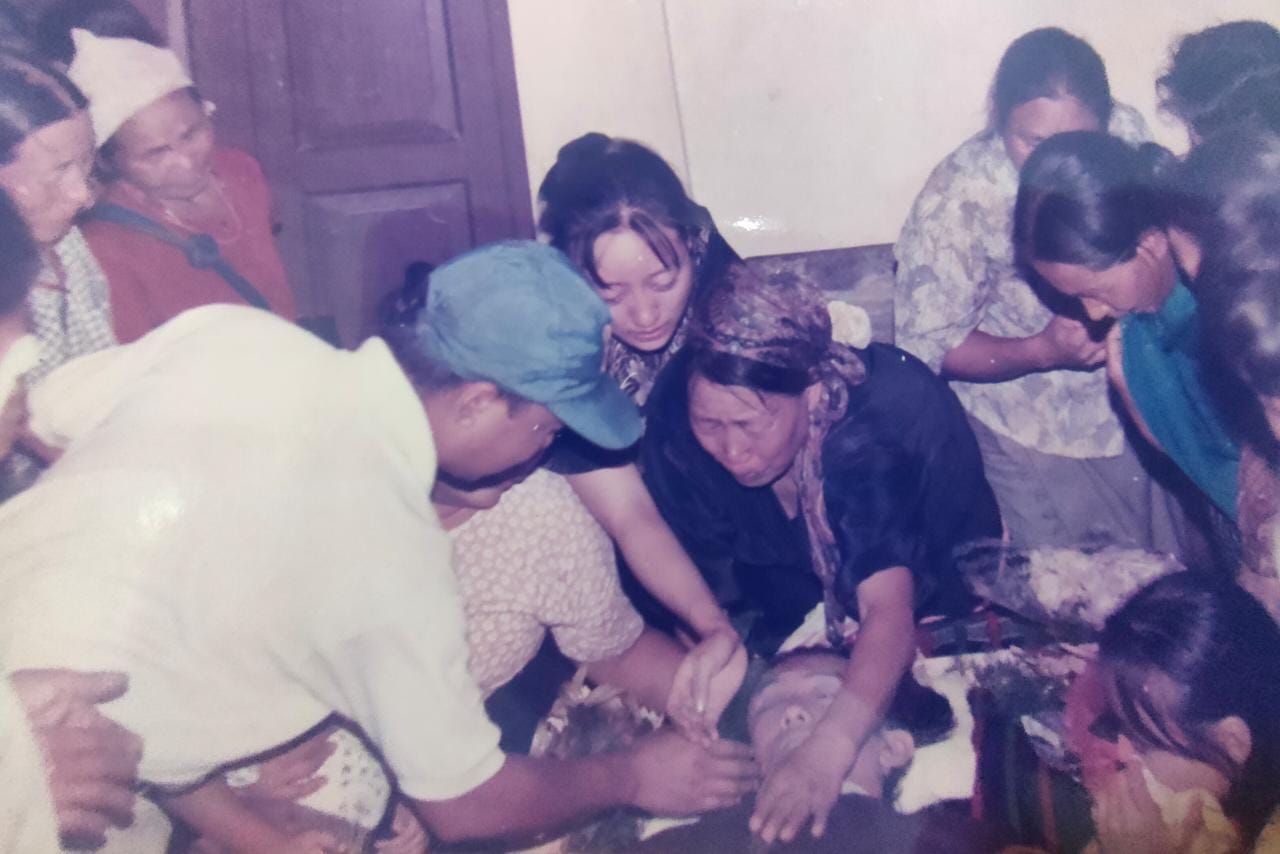 When Aja's body was brought home...

What I wrote in the poem is only one story. We have friends and family members who were physically tortured by the Indian army at different points of time, particularly in the past years.

I remember being stopped and frisked multiple times by the army while traveling between Dimapur and Kohima in the 80's especially. Army men would patrol our streets. They would stop and pee right in front of us and even make obscene gestures at us. As young girls then, we detested such encounters but we grew up seeing such things so often that we thought that was part of normal life.

Thinking back now, so many things were so wrong. We just didn't know.

We have nothing against Indians in general. In fact, some of our best friends are from India and we value their friendship. It's India's policies and AFSPA in particular, which we are very sad and even indignant about.

This latest incident in Oting has alerted many towards our plight. We are sincerely grateful to anyone who is listening to the Nagas.

Life And Death Under AFSPA

What do you do when a loved one's life is cut short just like that?

How are you supposed to feel?

What are you expected to say?

Can one even think straight in such moments?

The lifeless bodies of the slain Konyak young men must already be stiff and cold.

Did they sense, yesterday was to be their last trip to their fields?

Did they know they were breathing their last breaths as bullets rained down on them without any warning?

Did they whisper quick prayers before everything became dark and silent?

How are you supposed to react when you are told it was a case of "mistaken identity"?

Are mistakes easier to commit when power is in one's hand?

Does crime get another name when it is wrapped in a paper signed and sealed by some who've probably never tasted the loss of a dearest one being snatched away?

Tonight as I mourn my Konyak brothers and sons deeply,

My heart is painfully pulling out twenty three years of grief...

Twenty three years ago when my youngest brother Thejavor Aja Vüprü was shot multiple times from behind, by the Indian army,

His lifeless, bullet-riddled body and immeasurable sorrow were brought home,

And we were told, it was a case of "mistaken identity".

What do you do when your loved one's life is mercilessly snuffed out just like that?

How do you deal with what's left with you?

Does grief have a time line?

I won't claim to have answers.

I only know, I can choose to forgive, slowly...

But I cannot forget.

And I cannot help but ask, "How long? How much longer? Who next?"

5 Indian Murder Mystery's That Are A Must Watch