UP Polls: 'Ram Rajya', Nationalism In Focus As AAP Kicks Off Tiranga Yatra In Ayodhya

AAP leaders Manish Sisodia and Sanjay Singh offered special prayers at the Ram Janmabhoomi and Hanumangarhi temple in Ayodhya before kicking off the Tiranga Yatra in Faizabad. 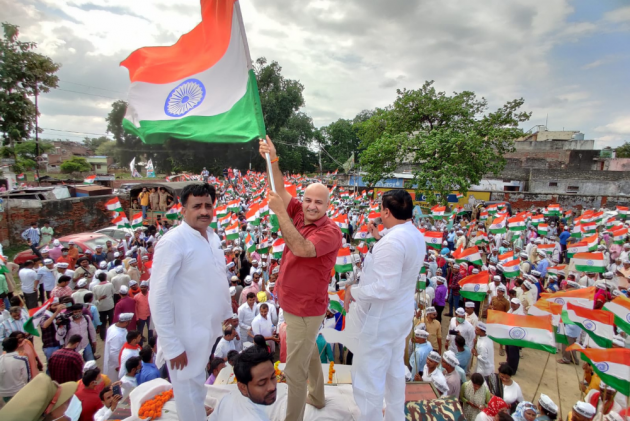 With an eye on the crucial Uttar Pradesh elections next year, the Aam Aadmi Party formally kicked off its poll campaign in Ayodhya today with AAP leaders Manish Sisodia and Sanjay Singh offering special prayers at the Ram Janmabhoomi and Hanumangarhi temple in the city.

It also embarked on the Tiranga Yatra (flag rally) in Faizabad, which started from the 18th-century mausoleum of Nawab Shujauddaulah and ended at Gandhi Park in the city.

The rally saw massive crowds that turned up with the tricolour, even as the party led by Arvind Kejriwal stressed on themes like "nationalism" and "Ram Rajya", both poll planks of the BJP in UP.

AAP's Tiranga Yatra In UP To Challenge BJP

AAP To Contest On All 403 Seats In UP Polls, Says Will Expose BJP’s ‘Fake Nationalism’

Ahead of the Faizabad rally,  Sisodia, the Delhi deputy chief minister, and Singh, the AAP's in-charge for Uttar Pradesh affairs, offered their prayers amid the chants of mantras in Ayodhya. They also took holy dip in the Saryu river and had lunch with sadhus.

"I prayed to Lord Rama for the establishment of the Ram Rajya in Uttar Pradesh," Sisodia said.

"Ram Rajya is still the highest inspiration for clean governance and administration," the deputy CM said. "With the grace of Lord Ram and the blessings of saints, the AAP under the leadership of Delhi Chief Minister Arvind Kejriwal is becoming a new definition of politics of honesty and development."

The Tiranga Yatra will give a new dimension to such politics, he added.

"With the blessings of Shri Ramchandra ji, we will raise the tricolour and teach real nationalism," said Sisodia.

He said he also prayed to Lord Hanumana at the Hanumangarhi temple to bless the AAP to form a government in Uttar Pradesh so that the people of the state get good education, quality health services, electricity, water and employment "like in Delhi".

The two leaders recited the verses of "Hanuman Chalisa" at the Hanumangarhi temple.

The Delhi's ruling party launching its Uttar Pradesh campaign from Ayodhya -- the city of the country's most disputed religious site -- becomes symbolically important. Political parties including the BJP, the SP the BSP have used Ayodhya to kick start their campaigns as momentum builds for the 2022 polls.

The Supreme Court's 2019 verdict paving the way for the construction of the Ram temple at the disputed site has brought the Ayodhya issue back to the centre stage ahead of the crucial polls.

The AAP leaders also met seers who invited them to the "Bada Sthan" temple, where Sisodia and Singh were given a warm welcome. They also had food with the sadhus of Ayodhya.

The lunch of vegetarian food prepared in "Desi Ghee" was attended by more than 100 prominent sadhus.