Manmohan Singh said BJP should stop blaming the UPA for every economic crisis. 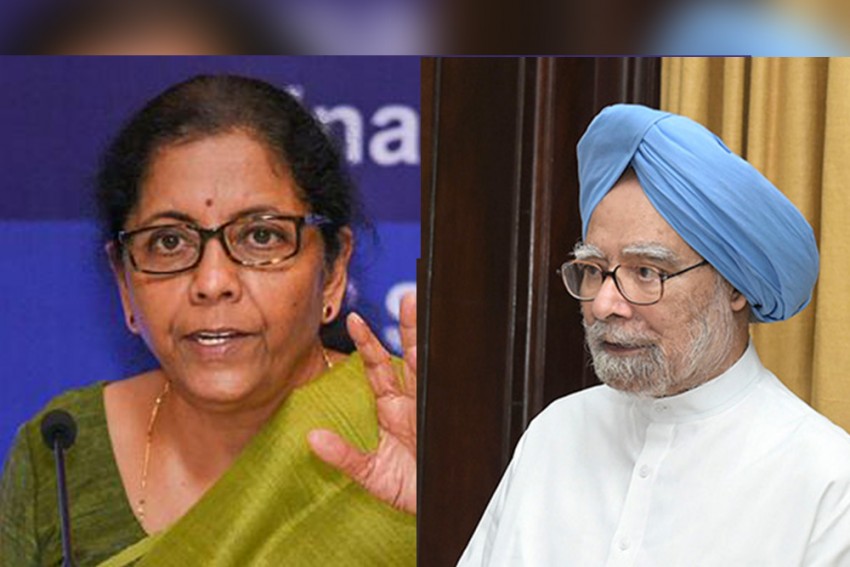 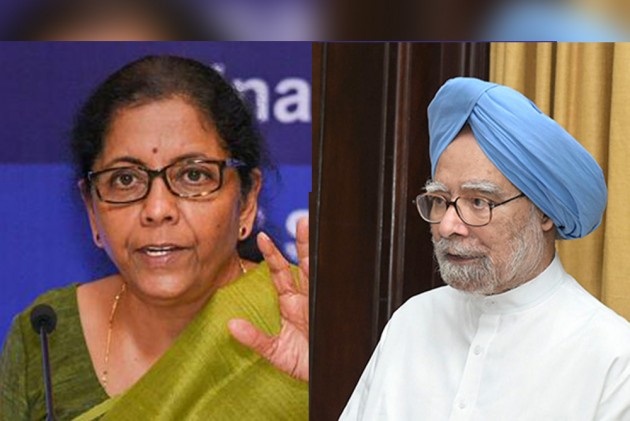 Recalling when and what went wrong during a certain period is absolutely necessary, Union Finance Minister Nirmala Sitharaman said, targeting former prime minister Manmohan Singh for accusing the NDA government of trying to put the blame on its rivals.

Conceding that there were some "weaknesses" in his regime, Singh had on Thursday said the Modi government should stop blaming the UPA for every economic crisis, as five years were sufficient time to come up with solutions.

"I respect Dr Manmohan Singh for telling me not to indulge in the blame game. But recalling when and what went wrong during a certain period is absolutely necessary to put it in context, now that I'm being charged that there's no narrative at all about the economy," Sitharaman told a group of Indian reporters in Washington on Thursday.

She was responding to a question on allegations by Singh that the government was always trying to put the blame on its opponents instead of finding solutions.

The senior Congress leader's comments at the press conference in Mumbai came after Sitharaman at an event at the Columbia University in New York held the Manmohan Singh-Raghuram Rajan combination responsible for subjecting public sector banks (PSBs) to their "worst phase".

"I have no reason to doubt that Rajan feels for every word of what he is saying. And I'm here today, giving him his due respect, but also placing the fact before you that Indian public sector banks did not have a worst phase than when the combination of Singh and Rajan, as prime minister and the RBI Governor, had. At that time, none of us knew about it," she had said.

Sitharaman told the group of Indian reporters on Thursday that her remarks in New York was an answer to a question.

The question was on parts taken out of the speech made by Rajan and it had three components to it, she said.

The quote referred to what the former RBI governor had said about a centralised leadership and the absence of a coherent narrative of the economy, Sitharaman claimed.

"I also understand there's already in India lots of discussion about the finance minister being out of the country and how could she talk about issues that are essentially to be spoken within the country.

"These taken on board, I would still say that was an answer given to a question which read a quotation from the speech of the former Reserve Bank governor," she said.

"Then, if a political assessment has been made, nothing stops anyone from making it and it's suddenly the right and prerogative of whoever wants to make it," the Union finance minister said.

She said she doesn't feel she had crossed the line by giving a response, whether within or outside the country.

"If there is a charge against us that we have not given a cohesive narrative about the economy, I'm sorry, probably it has not even reached the narrative that we're given about the economy or the target with which we are working or the response with which we are answering those stress in different parts of the country, those industries which are under stress, those messages have probably not even reached people who have commented on us," the finance minister said.

She said that the government listens and responds. If it is to be stated as to why in some areas there are difficulties, the government of the day has to recall as to what went wrong, Sitharaman said.

The finance minister said while recalling what went wrong, it certainly pertains to a period in which Manmohan Singh was prime minister and Raghuram Rajan, the RBI Governor.

"I had to recall that. So, it's not so much with the sense of wanting to put the blame on somebody," Sitharaman said.

Sitharaman said she respects Manmohan Singh for telling her not to do the blame game, but recalling when and what went wrong during a certain period is absolutely necessary to put it in context.

India under the present government will become a $5 trillion economy as transparent measures and policies are being implemented, she said.

This will be possible as loans cannot be taken from banks on phone, Sitharaman said, taking a dig at the previous UPA dispensation.

The government doesn't support crony capitalism and this is part of the narrative on the economy, she said.

"I would want to mix both my narrative together with stating what went wrong earlier. I wished the Congress had the courage of conviction to hear it," Sitharaman said.

"We never committed mistakes and corruption. We've not given any loans to cronies. We've never supported any wrongdoing and looked at the way when as prime minister, I would want to again recall the number of corruption cases which had happened during the UPA. Has there been anyone here (under NDA)?” she asked.

These are not lessons learned. These are the present government's convictions. Lessons have to be learned by people who should have learnt it even earlier, Sitharaman said.