The Election Commission cited certain guidelines for election manifestos contained in Part VIII of the Model Code of Conduct to conclude that the free vaccine promise was not violative of it. 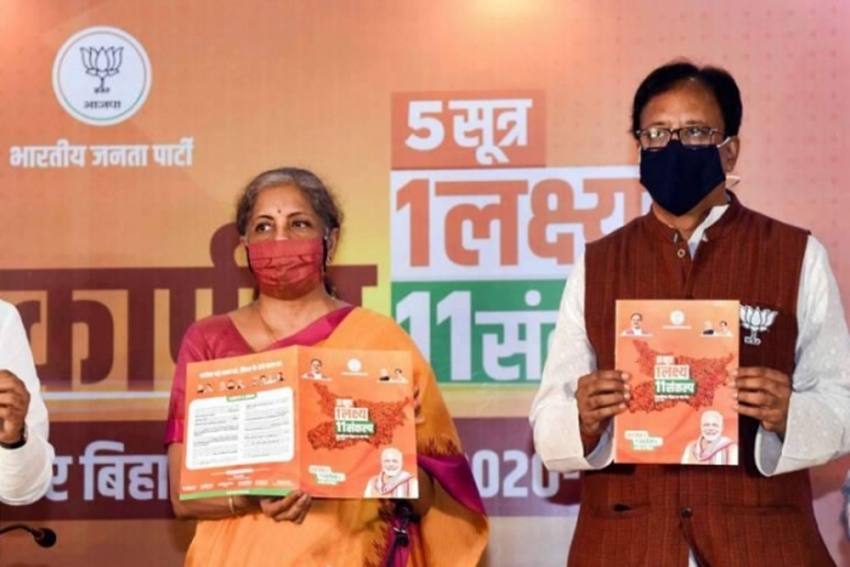 The BJP's promise of providing free coronavirus vaccine in its manifesto for the Bihar assembly polls is not violative of the provisions of the model code, the Election Commission has held.

Responding to a complaint by RTI activist Saket Gokhale, the commission said it has found no violation of the provisions of the model code in the issue.

"...no violation of any of the provisions of Model Code of Conduct has been observed...," the commission said.

Gokhale had claimed that the promise is discriminatory and a misuse of powers by the central government during elections.

According to sources, the commission cited certain guidelines for election manifestos contained in Part VIII of the Model Code of Conduct to conclude that the free vaccine promise was not violative of it.

"The Directive Principles of State Policy enshrined in the Constitution enjoin upon the State to frame various welfare measures for the citizens and therefore there can be no objection to the promise of such welfare in the election manifesto," one of the provisions quoted by the EC said.

Trust of voters should be sought only on those promises which are possible to be fulfilled, the other provision cited by the EC said.

"It is stated that the election manifestoes are issued by political parties, candidates in respect of a particular election," the EC response said.

Gokhale wrote on Twitter on Friday, "ECI shockingly ignored the fact that the Union government announced it for a specific state and said action is taken when the election atmosphere is vitiated."

Earlier this month, Union Finance Minister Nirmala Sitharaman had released the BJP manifesto for the Bihar assembly polls which promised free Covid-19 vaccine once it is cleared by the ICMR.

Opposition parties had slammed the BJP for promising free Covid-19 vaccines in its Bihar poll manifesto and demanded action by the Election Commission while alleging that the ruling party was using the pandemic for political gains.

Congress leader Rahul Gandhi took a swipe at the BJP, saying one has to refer to the state-wise election schedule to know when one will have access to the vaccine.

The BJP, however, said health is a state subject and its manifesto is for Bihar, not for the entire country, where it has promised that the state will buy the vaccine for its people.

The RJD, the Congress, Shiv Sena, Samajwadi Party and the National Conference all raised questions on the BJP's poll promise of free vaccine for Bihar, alleging that it is politicising the matter.