Lok Sabha Elections: As Saharanpur Goes To Polls, All Eyes On Muslim Voters

Saharanpur, with a sizeable Muslim population, will cast its vote on Thursday along with Kairana, Muzaffarnagar, Bijnor, Meerut, Baghpat, Ghaziabad and Gautam Budhha Nagar in the politically crucial state of Uttar Pradesh. 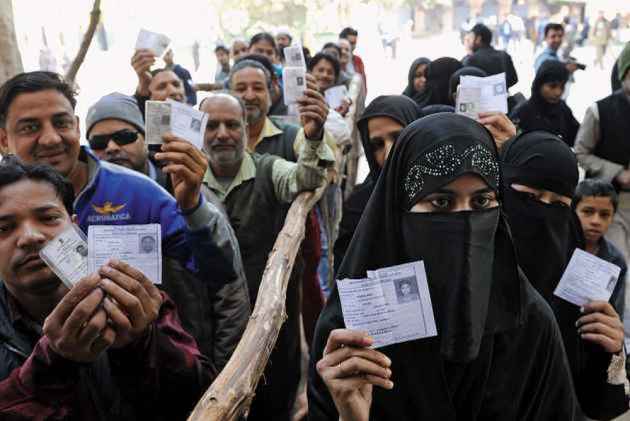 Saharanpur has become the hotspot for political parties with BJP, the SP-BSP alliance and Congress holding massive rallies and roadshows to woo voters, mainly Muslims, which constitute 40 per cent of the population.
File Photo
Preetha Nair 2019-04-10T20:09:48+05:30 Lok Sabha Elections: As Saharanpur Goes To Polls, All Eyes On Muslim Voters

As voting for the first phase of Lok Sabha elections begins April 11, Saharanpur in western Uttar Pradesh will be one of the most keenly watched constituencies, where a triangular contest is underway—between the Congress, SP-BSP-RJD alliance and the BJP.

Saharanpur, with a sizeable Muslim population, will cast its vote on Thursday along with Kairana, Muzaffarnagar, Bijnor, Meerut, Baghpat, Ghaziabad and Gautam Budhha Nagar in the politically crucial state. BJP-led NDA won 73 out of the 80 seats in 2014 Lok Sabha elections in Uttar Pradesh, the state which has a major say in deciding the next government at the Centre.

Saharanpur has become the hotspot for political parties with BJP, the alliance partners and Congress holding massive rallies and roadshows to woo voters, mainly Muslims, which constitute 40 per cent of the population.

34-year-old Mohammed Khan, who runs a tea shop near Deoband, tells Outlook that he has been doing brisk business for the last couple of weeks, thanks to high voltage campaigns by the major political parties. Khan says he will vote for the alliance partners as they are in a best position to defeat the BJP, which has alienated the community in the last five years.

The contest is tricky this time as both the Congress and the SP-BSP alliance have fielded popular Muslim candidates, which could split the votes in favour of the BJP. However, the alliance partners are confident that they will have the backing of the Muslim community. According to Samajwadi Party leader Zarfaraz Khan, the cadres are enthused after a historic rally of SP-BSP-RJD combine, where leaders of the three parties came together after 26 years. “Muslims are going to rally behind the alliance. People will vote for the alliance to defeat Modi,” says Khan, who was also a former minister in the Uttar Pradesh government.

Speaking to Outlook, Khan says the alliance has an edge over other parties with the combined support of Muslims and Yadavs. The importance of Saharanpur can be gauged from the fact that several leaders including Prime Minister Narendra Modi, BSP supremo Mayawati, SP chief Akhilesh Yadav and Congress general secretary Priyanka Gandhi were campaigning vigorously in the constituency.

BJP has retained its sitting MP Raghav Lakhanpal and is hoping to repeat its 2014 performance. Congress candidate Imran Masood, who hit headlines during 2014 elections, with his controversial statement that “will chop off Modi into pieces,” is trying his luck for the second time. Masood lost to Lakhanpal by 60, 000 votes in the last election. Muslim votes become crucial with the alliance candidate Haji Fazlur Rehman in the fray.

Speaking to Outlook a few days ago, he had said he is wary about BSP supremo Mayawati’s intentions.

“The alliance has given two seats to Congress and they should be happy about it. Last time, they fielded Imran and he could muster only 4 lakhs,” he adds. Satish Prakash, a Dalit activist also exudes confidence that with 25-30 per cent of Dalit vote share, the alliance is ahead of others.

Kamal Walia, district chief, Bhim Army says their objective is to defeat the BJP and he will vote for the party which is capable of ousting BJP.

Lovesheel Pal, an IT engineer, says he and his family will vote for the BJP. “There is a close fight between alliance candidate and BJP. I think BJP will win as Muslim votes polarise,” Pal tells Outlook. While he admits that there is disenchantment among voters about the sitting MP, Pal believes that the Modi factor will work for the party.

“Two Muslim candidates against the BJP is definitely an advantage for the party,” says Syed Mohammed (name changed), a government employee.

He adds that Masood’s caste may also work against him. “Masood belongs to Qàzi family, which is a higher caste. It may work against him because now, there is a pattern of Muslims voting based on caste,” he says.

As there is a murmur about Muslim community voting strategically to defeat BJP candidate, analysts are not ruling out such a scenario.

Sociologist and Professor at JNU Surinder Singh Jodhka says that the Muslim community could vote strategically as they are bearing the brunt due to polarisation. “It’s not 2014 and I feel that they will strategically vote this time. A section of Muslims voted for BJP in the last elections. Looking from a sociological perspective, despite internal divisions, they will try to oust BJP because of the polarisation that happened in the last five years. The alliance also has Dalit votes in their kitty,” says Jodhka.

However, a BSP leader, speaking on the condition of anonymity says there is a real concern of polarisation of votes as both Muslim candidates are equally popular among the community.

“If Masood gets more votes this time, there is a possibility of splitting of votes. All this talk about tactical voting is a rumour to create further confusion,” he says. With Bhim Army adding 10, 000 votes or more to Congress, votes will be polarised more, he says.