In normal circumstances, he would have been in people's midst but the present conditions, a reference to the nationwide lockdown due to coronavirus, do not permit that, he said, explaining the reason for his writing the letter. 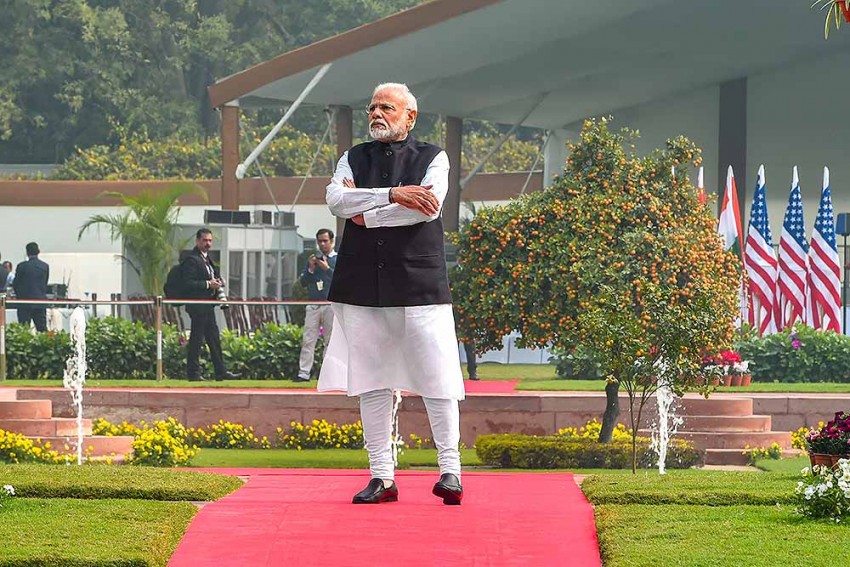 In this file photo, Prime Minister Narendra Modi waits for the arrival of U.S. President Donald Trump prior to a meeting, at the Hyderabad House, in New Delhi. (PTI)
PTI May 30, 2020 00:00 IST Labourers, Migrant Workers Have Faced 'Tremendous Suffering': PM Modi In Letter To Nation 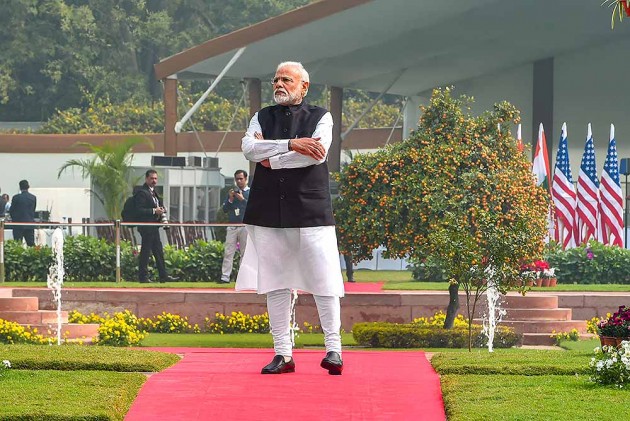 Prime Minister Narendra Modi marked the first anniversary of his second term on Saturday by writing an open letter to his countrymen, asserting that India has started traversing on the path to "victory" in its long battle against COVID-19 while acknowledging "tremendous suffering" of migrant workers among others.

In normal circumstances, he would have been in people's midst but the present conditions, a reference to the nationwide lockdown due to coronavirus, do not permit that, he said, explaining the reason for his writing the letter.

He said his government has taken "historic" decisions and the nation progressed rapidly in the last one year, even as he acknowledged that there is a lot that needs to be done and many challenges and problems face the country.

"I am working day and night. There could be deficiencies in me but there is nothing that our country lacks," Modi said, adding, "I believe in you, your strength and your abilities even more than I believe in myself."

He said India has surprised the world with its unity and resolve in the fight against coronavirus, and there is a firm belief that it will also set an example in economic revival.

Talking of the people's sufferings, he said in a crisis of this magnitude, it can certainly not be claimed that no one suffered any inconvenience or discomfort.

"Our labourers, migrant workers, artisans and craftsmen in small scale industries, hawkers and such fellow countrymen have undergone tremendous suffering. We are working in a united and determined way to alleviate their troubles," he said.

Modi asked people to take care to ensure that inconveniences that they are facing do not turn into disasters.

It is very important for every Indian to follow all rules and guidelines, he said, adding people have displayed patience so far and should continue to do so.

"This is one of the important reasons for India being safer and in a better state than many other countries. This is a long battle but we have started traversing on the path of victory, and victory is our collective resolve," he said.

Referring to the post-COVID world, the prime minister said there is a widespread debate on how the economies of various countries, including India's, will recover.

"However, given the way India has surprised the world with its unity and resolve in the fight against coronavirus, there is a firm belief that we will also set an example in economic revival," Modi asserted.

Pitching for self-reliance, he said it is the "need of the hour."

"We have to move forward based on our own abilities, in our own way, and there is only one way to do it - Aatmanirbhar Bharat or self-reliant India," he said.

The recent Rs 20 lakh crore package given for Aatmanirbhar Bharat Abhiyan is a major step in this direction, he said. He had announced the package in his recent address to the nation.

"This initiative will usher in a new era of opportunities for every Indian, be it our farmers, workers, small entrepreneurs or youth associated with start ups," Modi pointed out.

Due to the pandemic this is certainly a time of crisis, he said, adding that for Indians this is also a time for a firm resolve.

"We must always remember that the present and future of 130 crore will never be dictated by an adversity. We will decide our present and our future. We will move ahead on the path of progress and victory will be ours," he said.

Referring to an ancient saying, the prime minister said that if people have action and duty on one hand, then success is assured on the other hand.

As a result of the policies and decisions of the government, Modi said the rural-urban gap is shrinking.

"For the first time, the number of rural Indians using internet is 10 per cent more than the number of urban Indians," he pointed out.

Recalling his return to power in the 2019 Lok Sabha polls with a bigger mandate, he said this day last year began a "golden chapter" in the history of Indian democracy, as it was after several decades that people of voted back a full term government with a full majority.

Modi and his Cabinet had taken oath on this day last year.

He said the people of India voted not merely for continuity but also with the dream of taking India to new heights and making it a global leader.

The decisions taken in the last one year are directed at fulfilling this dream, he said.

Noting that some of the decisions taken by his government were widely discussed and remain etched in public discourse, Modi asserted the nullification of Article 370 furthered the spirit of "national unity and integration".

"The Ram Mandir judgment, delivered unanimously by the honourable Supreme Court of India, brought an amicable end to a debate persisting for centuries. The barbaric practice of triple talaq has been confined to the dustbin of history. Amendment to the Citizenship Act was an expression of India's compassion and spirit of inclusiveness," he said.

People feel involved and integrated in the development trajectory of the nation, and the light of 'Jan Shakti' and 'Rashtra Shakti' has ignited the entire nation.

"Powered by the mantra of 'Sabka Saath, Sabka Vikas, Sabka Vishwas', India is marching forward in all spheres," he said.

Earthquake of Magnitude 4.5 Jolts Rohtak In Haryana, Strong Tremors In Delhi-NCR Too