Kangana Ranaut was served a legal notice by the Delhi Sikh Gurdwara Management Committee, which is seeking an unconditional apology from the actor. 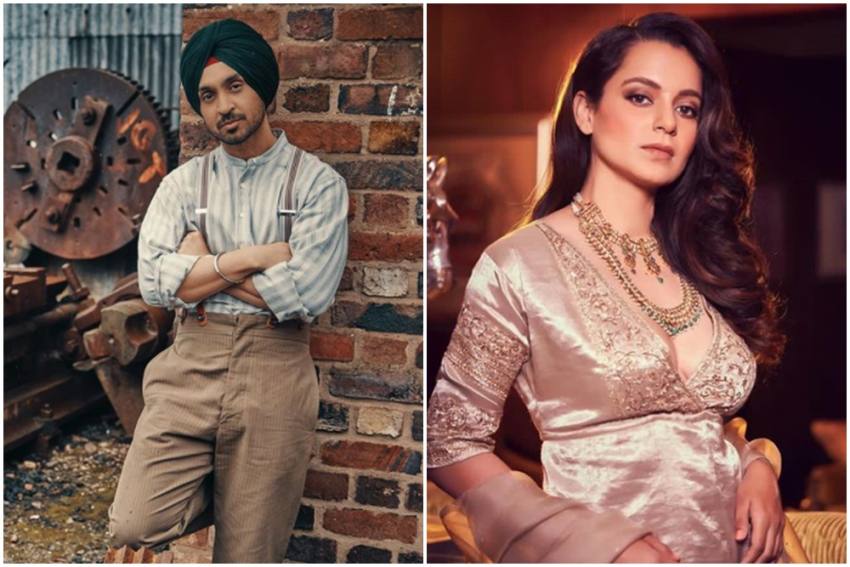 It was Kangana Ranaut versus not just Diljit Dosanjh but several other Punjabi artistes as well as the Delhi Sikh Gurdwara Management Committee on Friday with the actor's comments against an elderly participant in farmers' protest leading to a bitter war of words and demands for an apology.

Ranaut, who made headlines with her spat with Dosanjh on Twitter, was served a legal notice on Friday by the Delhi Sikh Gurdwara Management Committee which is seeking an unconditional apology from the actor.

This is the second legal notice against the actor, who has already been served a legal notice by a lawyer from Punjab's Zirakpur town on December 2 over her tweet.

Prominent singers and artistes from Punjab, including Mika Singh, Ammy Virk and Jazzy B, meanwhile, have also criticised Ranaut while backing Dosanjh for his war of words with Ranaut.

Dosanjh had taken Ranaut to task for misidentifying the woman farmer as Bilkis Bano, a septuagenarian who had attracted international attention for her participation in the anti-CAA protests earlier this year at Delhi's Shaheen Bagh neighbourhood. He had shared a BBC interview that identified the woman farmer as Mahinder Kaur.

Ranaut had shared a tweet on November 27, alleging that the ''Shaheen Bagh dadi'' also joined the farmers’ agitation over the new laws at various border points of the national capital.

She retweeted the post with pictures of two elderly women, including Bilkis Bano, and wrote that the "same Dadi" who featured in Time Magazine was "available in 100 rupees", a comment that has particularly irked the members of the Punjabi community.

The actor had reportedly deleted the tweet when Twitter users had pointed out about her mistake but it had already sparked a major controversy.

Singer Mika Singh said he regrets supporting Ranaut when the Brihanmumbai Municipal Corporation (BMC) undertook the demolition of the illegal alterations at the actor's Bandra bungalow in September.

The "Singh is King" singer said Ranaut should apologise for her remarks against an elderly Punjabi woman.

"I used to have immense respect for @KanganaTeam, I even tweeted in support when her office was demolished. I now think I was wrong, Kangana being a woman you should show the old lady some respect. If you have any etiquette then apologise. Shame on you," Singh tweeted.

I used to have immense respect for @KanganaTeam, I even tweeted in support when her office was demolished. I now think I was wrong, Kangana being a woman you should show the old lady some respect. If you have any ettiquete then apologise. Shame on you.. pic.twitter.com/FqKzE4mLjp

Another singer Jaswinder Singh Dhami, known by his stage name Jaz Dhami, called Ranaut an "attention seeker", saying it was not civil of the actor to insult a citizen protesting for her rights.

"I used to have respect for @KanganaTeam for the way she came out and spoke up. But now I realise you're just a deeply narrow-minded, attention seeking puppet!"

I used to have respect for @KanganaTeam for the way she came out and spoke up. But now I realize you're just a deeply narrowminded, attention seeking puppet! You had some BULSHIT wall taken down and was crying because it hit your pocket and hurt your ego.

Virk took to Twitter and shared a funny, edited video, with visuals of Ranaut and Dosanjh's films, where the "Queen" star is shown to regret fighting with the Punjabi actor.

Ranaut had called Dosanjh filmmaker Karan Johar's "pet", a “bootlicker” and asked if he wasn’t ashamed of defending somebody who “instigated” the Delhi riots earlier this year.

She also said her comments were directed towards Bilkis Bano and not Mahinder Kaur, someone she said she didn't even know.

Not one to back down, Dosanjh, who shot to national fame with the 2016 drug drama "Udta Punjab", in turn, asked if she was a sycophant of everyone she has worked with. "Then the list will be long," he said.

The "Udta Punjab" actor also found support with Bollywood celebrities, who lauded him for his conduct.

"Thank you @diljitdosanjh You give me hope. Dil jeet litta," Shrivastava tweeted.

Thank you @diljitdosanjh You give me hope. Dil jeet litta!

Actor Richa Chadha tweeted that no one should fight with a Punjabi.

Actors Swara Bhasker and Taapsee Pannu also spoke up on the issue.

Comedian Saloni Gaur uploaded a sketch, mimicking Ranaut's struggle to understand Punjabi, which was then shared by Dosanjh on his page.

Ranaut later tweeted she supports farmers and has been vocal about their "exploitation and problems" and was certain that the government will address their doubts.

Thousands of farmers have gathered at Delhi’s gateways to demand a repeal of the Centre’s three new farm laws.

The protesting farmers are worried the new laws will eliminate the safety cushion of a Minimum Support Price (MSP) and procurement system, while rendering ineffective the mandi system that ensures earnings for various stakeholders in the farm sector.

The farmers, who have called for a Bharat Bandh on Tuesday, fear the new farm laws will dismantle the minimum support price system, leaving them at the "mercy" of big corporates.