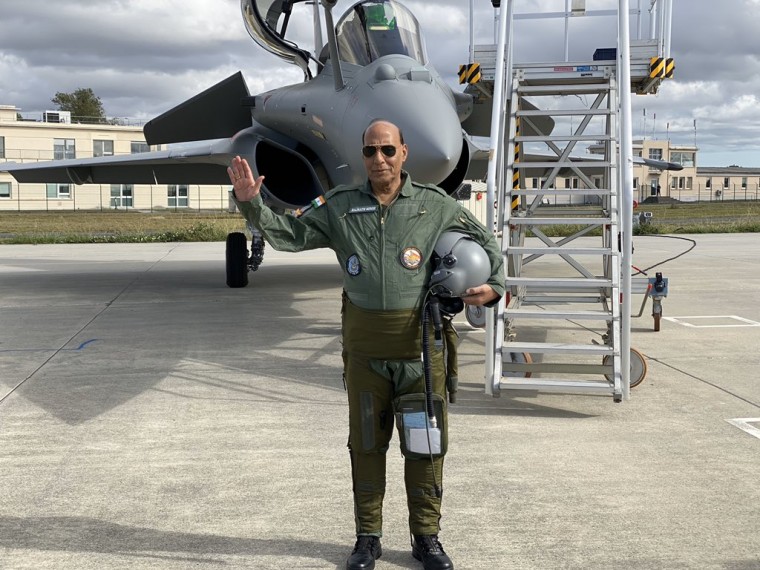 Defence Minister Rajnath Singh took off for a sortie in a Rafale fighter jet soon after receiving the first of the 36 jets in France on Tuesday.
Twitter
Outlook Web Bureau October 08, 2019 00:00 IST India Gets Its First Rafale Fighter Jet, Rajnath Singh Says 'Historic Day For IAF' 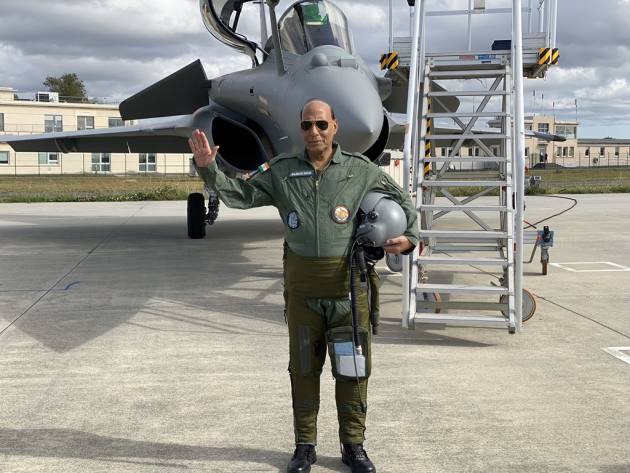 The Indian Air Force on Tuesday received its first Rafale fighter jet from a series of 36 aircraft purchased from France in presence of Defense Minister Rajnath Singh here.

Singh attended the handover ceremony of the first Rafale fighter jet acquired by the IAF along with his French counterpart Florence Parly at aircraft maker Dassault Aviation facility in Merignac, southwestern France.

Singh, who earlier held wide-ranging talks with French President Emmanuel Macron in Paris, said his visit was aimed at "expanding the strategic partnership" between India and France.

Arrangements were made for a traditional Indian Shastra Puja, or weapons' worship which forms part of Dussehra celebrations and this year also marks Air Force Day - IAF's 87th anniversary.

Singh also flew a sortie in the Rafale jet following the Shastra Puja, which  concluded with the traditional breaking of a coconut before the new aircraft.

"Today marks a new milestone in the Indo-French strategic partnership and indeed a new high in the bilateral defence cooperation. Such achievements encourage us to do more and that will be on my agenda when I meet minister Parly today," Singh said, in reference to the annual Indo-French Defence Dialgoue scheduled for later on Tuesday in Paris.

"This is a historic and landmark day for the Indian Armed forces, which reflects the depth of strategic partnership between India and France. Today marks Vijayadashami – the victory of good over evil – as also the 87th Indian Air Force Day. And therefore a symbolic day in so many ways," he added.

India had ordered 36 Rafale fighter jets from France in a deal worth Rs 59,000 crore in September 2016. The first batch of four Rafale jets will fly to their home base in India by May 2020.

All 36 jets are expected to arrive in India by September 2022, for which the IAF has been reportedly undertaking preparations, including readying required infrastructure and training of pilots.

The Rafale is a twin-jet fighter aircraft able to operate from both an aircraft carrier and a shore base. The manufacturers describe it as a fully versatile aircraft which can carry out all combat aviation missions to achieve air superiority and air defence, close air support, in-depth strikes, reconnaissance, anti-ship strikes and nuclear deterrence.

PM Modi Formed Panel For OBCs, Which Previous Govts Could Not Do In Last 70 Years: Amit Shah