India have a tough decision to make ahead of their ICC Cricket World Cup 2019 match against New Zealand. Who will come in for injured Shikhar Dhawan: Vijay Shankar or Dinesh Karthik? 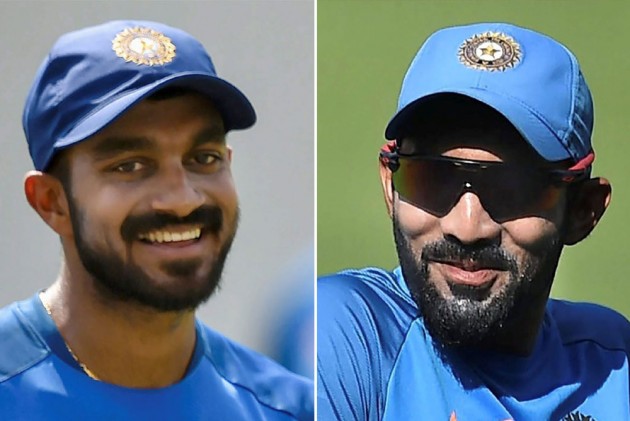 On the eve of India's ICC Cricket World Cup 2019 group match against New Zealand, Vijay Shankar and Dinesh Karthik were seen going through the batting rigours. One of them will come in for injured Shikhar Dhawan, who has been ruled out for three weeks. But nobody knows who will it be?

In Dhawan's absence, KL Rahul will partner with Rohit Sharma as openers, at least for the next couple of matches. But Rahul's promotion leaves a void in the middle order, vis-a-vis the unsolved number four problem. Rahul, who was named in the squad as a back-up opener, earned his spot in the playing XI as the number four after hitting a hundred in the warm-up match against Bangladesh. He was only starting to settle in that role, and now, he will be required to face the new ball.

Both Shankar and Karthik have the game to flourish in the middle orders. For that matter of fact, Shankar was originally named in the squad as the number four, ahead of Ambati Rayudu; while Karthik got the ticket as the second wicket-keeping option. By the way, Rishabh Pant, who was named as a Dhawan's cover, is on standby and will join the team if Dhawan is completely ruled out of the tournament.

So, who will it be: Shankar or Karthik?

With team balance in a disarray, India would be required to take a tough decision.

The best that the Indian camp can do is to take it game-by-game. For example, with rain forecast for the New Zealand match, India should go with Shankar. The three-dimensional player will be a handy bowler in overcast conditions. And that's what India's batting coach Sanjay Bangar hinted. "Obviously, Vijay Shankar is going to be an option, and there are a couple of others as well," he said.

India's campaign is only two matches old, and their first real test will be on Thursday when Virat Kohli & Co take on the Kiwis, the only other unbeaten side so far in the tournament.