The noted playwright takes Landmark and Literature Alive to task: 'Do they mean to valorise Naipaul's stand that Indian Muslims are raiders and marauders? Are they supporting his continued insistence on Muslim buildings in India being monuments to 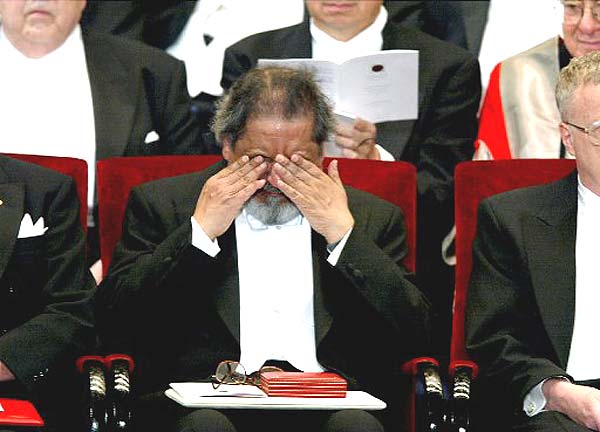 On Friday afternoon at the Tata Literature Live! festival in Mumbai, playwright Girish Karnad surprised audiences with an unexpected and spirited critique of Nobel laureate Vidia Naipaul. Naipaul was awarded the Landmark and Literature Alive's Lifetime Achievement Award on October 31. Karnad was originally supposed to talk about “his life in theatre” in his session, but instead launched into a scathing critique of Naipaul and the conferral of the award to him

This is the text of the statement mailed by Mr Karnad: [the bits in italics were later added from the Times of India and the available video, as actual delivered remarks]

At the Mumbai Literature Festival this year, Landmark and Literature Alive have jointly given the Lifetime’s Achievement Award to Sir Vidia Naipaul. The award ceremony held on the 31st of October at the National Centre of the Performing Arts coyly failed to mention that Naipaul was not an Indian and has never claimed to be one. But at no point was the question raised, and the words Shashi Deshpande, the novelist, had used to describe the Neemrana Festival conducted by the ICCR in 2002 perfectly fitted the present event: ‘it was a celebration of a Nobel Laureate …whom India, hopefully, even sycophantically, considered an Indian.’

Apart from his novels, only two of which take place in India and are abysmal,  Naipaul has written three books on India and the books are brilliantly written—he is certainly among the great  English writers of our generation. They have been hailed as a continued exploration of India's journey into modernity, but what strikes one from the very first book—A Wounded Civilization—is their rabid antipathy to the Indian Muslim. The 'wound' in the title is the one inflicted on India by Babar's invasion. Since then, Naipaul has never missed a chance to weigh in against the 'invaders', accusing them of having savaged India for five centuries, of having brought, among other dreadful things, poverty into it and destroyed the glorious ancient Hindu culture .

A point that strikes one immediately about these books is that there is not a single word in any of them on Indian music. Given that music defines our daily existence... you find it in the streets, in the restaurants and so on... you would expect an exploration of India to comment on that. Now Mr Naipaul has written three books on India, three very big books... and not one of them contains any reference to music. He has gone through the whole of India without responding to Indian music.

Now I think this only means that he is tone-deaf. That's my reading of the situation but then there's no reason why he shouldn't be tone-deaf. It is a constitutional right we all have. But what happens is that if you don't understand music, if you don't respond to music, then you can't respond to Indian history because the real development of Indian culture has been through music.

This is one problem with Mr Naipaul's analysis of Indian culture. He has no music and therefore no conception of what the Muslims contributed to our history. His concept of what the Muslims did in Indian history clearly shows that he has no idea of what at least the music did. Now, not having music -- not having an ear for music deprives him of another chapter in his book really, if I might put it that way.

This explains his insensitivity  to the intricate  interweaving of  Hindu and Muslim creativities, through the Bhakti and Sufi movements, that gave us this extraordinary  heritage, alive in the heart of every Indian  home.

What Naipaul's virulence against Indian Islam conceals is that he has borrowed his model of the history of Indian culture from the British musicologists of the eighteenth and nineteenth centuries, like William Jones. These scholars were acquainted with many other ancient civilizations, such as the Egyptian, the Greek and the Roman. But they were mystified by the fact that while the musical traditions of these civilizations were entirely lost, the Indian musical tradition was alive and thriving.

They decided that this once pure-and-glorious music must have been, at some point during the course of its long history, corrupted and mauled—and they found the villain in the invading Muslim. So, according to them, once upon a time  there was a pristine Indian musical culture, which the  Muslims had disfigured. They therefore ignored the music that was being performed around them and went in search of the true Hindu music.

The foreigners come, they look at Indian culture, they see pristine Hindu culture, they see that it's corrupted and it's corrupted by Muslims. So you see, anyone who has read Naipaul's book will immediately recognise this matrix, which actually he claims that he arrived at through himself but it is already there in any Indological study long before.

In his analysis of Indian culture Naipaul simply borrows this line of argument and reemploys it—as his original perception. And not for the first time.

Naipaul accuses R.K. Narayan of being indifferent to the destruction and death symbolized by the ruins of Vijayanagar, which to him was a bastion of Hindu culture destroyed by the marauding Muslims. But again he gets this interpretation of the history of Vijayanagar  readymade from a book by Robert Sewell called  A Forgotten Empire, published in 1900.

Naipaul, as always in awe  of his colonial sources, simply accepts this picture as the unadorned truth and recycles it wholesale as his own. That historians and archaeologists working on the site during the last century have proved the situation to be much more complex and have shown that religion had little role to play in the conflict is irrelevant to him.

Now again, what he says is predictable, which is that the Muslims destroyed Indian architecture, that everything went to pot. They were the raiders, they were the destroyers, and you have to look at any building to see what happened during the Muslim regime. And here is what he said about the Taj when people argued with him: "The Taj is so wasteful, so decadent and in the end so cruel that I found it painful to be there for very long. This is an extravagance that speaks about the blood of the people

None of us, if we were at the Taj, would think of the extravagance that speaks about the blood of the people! That's why you get a Nobel Prize, you know.

He brushes off historian Romila Thapar's argument that the Mughal era saw a rich efflorescence of the mixture of Hindu and Muslim styles, by attributing her judgment to her Marxist bias  and says, 'The correct truth is the way the invaders look at their actions, They were conquering. They were subjugating.'

To Naipaul, the Indian Muslim remains an invader for ever, forever condemned to be condemned, because some of them had invaders as their ancestors. It is a usage which would yield some strange results if applied to the USA.

As for Naipaul's journalistic exploration of modern India,  mainly in the form of a series of interviews conducted  with Indians right across the board, one must confess they are supremely well written and that he is a master in drawing sharp and precise visuals of the people he talks to and of the places he visits.

What begins to bother one after a while however, is that he  invariably seems to meet brilliant interviewees whose answers to his questions are expressed with a wit and elegance that match his own mastery of the language. Even half-literate interviewees suffer from no diffidence in their expression.

How reliable are the conversations he records?

In a well-known essay Naipaul describes his visit to the National Institute of Design, Ahmedabad, where he stayed with his friend, Ashoke Chatterjee, the Director of the Institute.

In a recent email to me, Mr Chatterjee said, that Naipaul's essay was "a scenario that could have been, but was not what he actually saw. Fragments of reality, selected and put together, into a collage of pure fantasy."

Chatterjee's friendship with Naipaul came to an abrupt end when Chatterjee told Naipaul that his book, A Wounded Civilization, should be classified as fiction.

In a recent book, Naipaul takes up for examination the autobiography of Munshi Rahman Khan, who emigrated to Suriname at the end of the nineteenth  century, and contrasts it with Gandhi's.

Sanjay Subrahmanyam, the historian, has reviewed the essay in the London Review of Books and it doesn't take him much effort to establish that Naipaul could only have read a third-hand, truncated translation of the text: "It is as if a reader in Gorakhpur was reading Naipaul in Maithili after the text had passed through a Japanese translation."

That doesn't prevent Naipaul from commenting even on the style and linguistic usage of Rahman Khan.

The question surely is by giving him the Lifetime Achievement Award, what statement is being made by the award-givers?

As a journalist what he writes about India is his business. No one can question his right to be ignorant or to prevaricate.

But the Nobel Prize has given him a sudden authority and his use of it needs to be looked at.

It was then that he made his most infamous remark: "Ayodhya", he said, "is a sort of passion. Any passion is creative. Passion leads to creativity."

Salman Rushdie's response was that Naipaul was behaving like "a fellow-traveller of Fascism and [that he] disgraces the Noble Prize."

In the wake of Ayodhya close to 1500 Muslims were slaughtered in the streets of Bombay alone. I was attending a Film Festival in New Delhi when the riots broke out  and received anguished  calls from my friends in Bombay to say Muslims were being pulled out of their homes or stopped in the streets to be killed.

I rang my Muslim editor to say he and his family could use my flat, in a predominantly Parsi building, until the situation became safe.

The great Marathi actress, Fayyaz, whom I finally located after a week in a corner in Pune where she had fled in distress from Mumbai, described how Shiv Sainiks had thrown fire bombs into Muslim slums and how, when the inmates of the houses rushed out in terror, they were shot down by the police as trouble-makers.

Seven years later, in cold blood, Naipaul was glamorising  these  events as "passion", as "a creative act".

It is significant that this part of Naipaul's sociologising was not mentioned in the citation of the Award, or by Farrukh Dhondy, who while  interviewing him, mentioned the book, Among the Believers and then quickly moved to a long-winded account of how he had helped Sir Vidia adopt a cat which thirteen years later was put to sleep lying on his lap—giving  Naipaul another chance to burst into sentimental tears.

Presumably Dhondy was trying to prove how 'human' Naipaul was.

But Landmark and Literature Alive who have announced this Award have a responsibility to explain to us where exactly they stand with regard to these remarks by Naipaul.

Naipaul is a foreigner and can make pronouncements as he wishes. But do they mean to valorise Naipaul's stand that Indian Muslims are raiders and marauders? Are they supporting his continued insistence on  Muslim buildings in India being  monuments to rape and loot? Or are they by their silence suggesting  that these views do not matter?

The Award givers have much to answer for.

Nov 3, 2012: Edited to add direct quotations (in italics) from the Times of India and the video to the text sent by Mr Karnad

On the same subject, from our 2004 archives:

The Ghosts Of Mrs Gandhi