Tribute To A Master

The passing of cinematographer Subrata Mitra, in December last year went almost unnoticed. Who would believe that of the man who had enabled Satyajit Ray put India on the world film map with Pather Panchali? 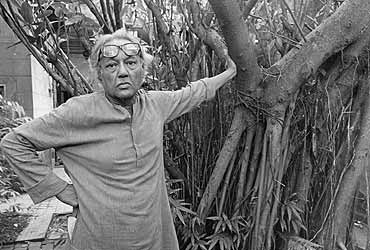 outlookindia.com
-0001-11-30T00:00:00+05:53
His work set a standard that others could hope to equal or surpass but, regrettably, none did in this country in the last 47 years. While film history has been extremely kind to Satyajit Ray, it has, in equal measure, been unkind to Subrata Mitra.

Cinema, the pundits tell us, is a director's medium just as the theatre is the actor's. Both of the observations, to say the least, are erroneous. The cinematographer -- the cameraman, of old -- was and still continues to be the one who captures the director's vision on film and creates the ground for its interpretation. It is he who gives the viewer a glimpse into the director's mind and soul. It would not be wrong to suggest that Satyajit Ray's prodigious growth as a filmmaker was in direct proportion to Mitra's as a cinematographer.

Afterall, he photographed Ray's finest work. Who can forget The Apu Trilogy, Paras Pathar, Devi, Jalsaghar, Kanchanjanga, Mahanagar, Charulata and Nayak? With his departure, the visual quality in Ray's films, and, on occasion, the artistic quality as well deteriorated, though the change was subtle.

The post-Mitra films wore a more home-made look; their elegance more approachable. Mitra was succeeded by his modest and worthy assistant Soumendu Roy in the unit, who was literally reduced to doing the lighting, which he did very well, while the director took over as camera operator -- in retrospect, limiting the visual possibilities in many of the latter films.

Ray and Mitra fell out because of the former's tendency to try and operate the camera, which is a specialist's job. He tried that once or twice during the shooting of Charulata and then again in Nayak, much to the chagrin of his gifted cameraman. Time has decided in Mitra's favour. The films that he photographed for Ray are visually and on the whole artistically, discernibly superior to the ones that were produced after his departure.

His career was to an extent thwarted by his pride in his work. He did not count the cost, when he turned down project after project in the second half of his career because they were below his artistic expectations. But he did go to Bombay at the insistence of Shailendra, the legendary lyricist of Hindi cinema who produced Teesri Kasam. His black and white photography added stature to this bitter-sweet love story that had Waheeda Rehman and Raj Kapoor in the lead.

His lambent visuals in two other B/W films Shakespearewala, and before that The Householder directed by James Ivory for the Merchant-Ivory banner came in for lavish praise. He did one more Hindi film after that -- New Delhi Times, a stylish political thriller in colour directed by Ramesh Sharma in 1989. The film won him his first national award for cinematography.

He should have got many more.

His work in colour opened new vistas for Indian cameramen as his B/W efforts had done earlier. Kanchenjunga (1962) was the most refined colour experiment in our cinema. This was made possible despite the fact that colour processing and printing in India was in its infancy those days. His other noteworthy work in this medium is Victor Bannerjee's An August Requiem (1981). Mention must also be made of his exquisite handling of colour in Rumtek, a documentary on a Buddhist Tibetan monastery near Darjeeling, also directed by Ramesh Sharma.

The parting of ways with Merchant-Ivory productions came in the early 1970s allegedly because of his temperament and fussy nature.  He supposedly slowed things down by treating every shot as if it were the most important one in the film. He had, however, done in the meanwhile two more films, also in colour -- The Guru and Bombay Talkie -- for them,  with his usual quiet elegance.

It is indeed a pity that his career was limited to twenty feature films - fifteen in B/W and five in colour and two or three documentaries. Filmmakers, young and old were afraid to approach him because of his grave, and on occasion, forbidding appearance and of course his principled attitude. His work was however greatly appreciated abroad, particularly by the French.

In the final years of his life he was a visiting professor at the Satyajit Ray Film and Television Institute, Calcutta, where he won a set of admirers amongst the young. Till the very end he remained a champion of source-lighting, a technique of establishing the direction of light illuminating a shot in a film and, because of it, defining its visual logic and mood. His other commitment was to poetic realism, which he thought was the recipe for memorable cinema.

In art and in life he was always his own man, full of feeling but no mush.

Edge Of The Precipice: The Art Of Rameshwar Broota