'There Isn't An Identifiable Ethos'

Different pockets of the city have completely different cultures. I'm a bit surprised by the paucity of fiction, because Delhi can be so full of interesting stories for people to write about. 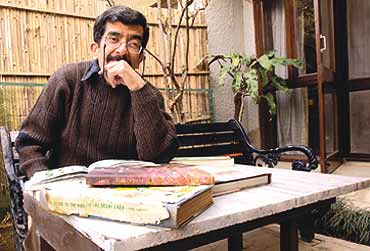 outlookindia.com
-0001-11-30T00:00:00+05:53
USHA GANGULY'S A Guide to the Birds of the Delhi Region, a very old book that I think is out of print today, is a comprehensive nature study--it looks at over 400 species of birds. Among the world’s major metropolitan centres, Delhi’s bird-life is second only to Nairobi’s. Unfortunately, as a people, we are not that interested in nature--we have no idea how rich we are and how poor we are going to become. Even when you see people feeding birds or monkeys, it’s very often done for selfish reasons--as a religious offering, for personal success, done on specific days of the week. I also like Pradip Krishen’s recent Trees of Delhi, which is a very friendly, accessible work, and Khushwant Singh’s Nature Watch.

I admire Shama Mitra Chenoy’s Shahjahanabad: A City of Delhi, 1638-1857, which is a study of life in Shahjahanabad over two centuries. Her thesis is that life in the Walled City was very cohesive--not like the British made it out to be. William Dalrymple’s The Last Mughal is a fine study of life around the 1857 Mutiny, much less academic than most other books of its kind.

I haven’t read much fiction set in Delhi, apart from Sagarika Ghose’s The Gin Drinkers and Aniruddha Bahal’s Bunker 13. I’m a bit surprised by the paucity of fiction, because Delhi can be so full of interesting stories for people to write about. One problem with Delhi might be that there isn’t an identifiable ethos--different pockets of the city have completely different cultures.

I wrote a book called The Life and Times of Altu Faltu a few years ago, a take-off on Delhi society--political skullduggery and social alliances--where the characters were all monkeys. But even I have a hard time getting my hands on that book today! I’ve recently written a story for older children titled The Battle for No. 19 (Puffin, 2007), about a group of children trapped in a house during the anti-Sikh riots of 1984.

Other mentions: The Millennium Book on New Delhi, edited by B.P. Singh and Pavan Varma, which is a collection of essays on different aspects of the city; and Delhi Between Two Empires by Narayani Gupta.

A Delhi that’s able to laugh at itself a bit more.

'Where Is The Jamia, DU Or JNU Novel?'