'There Is No Spark In The Team'

'We lost the matches due to our own mistakes and we are all responsible for our poor performance so far,' says an upset chief coach 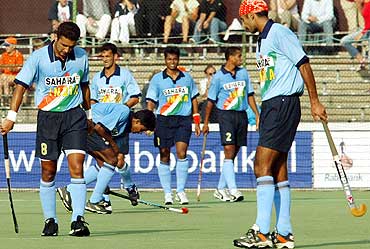 Conceding that the players lacked "spark and passion", Indian hockey coach Rajinder Singh today said the entire team should take the blame for India's debacle in the Champions Trophy.

"I am at a loss really, because we started off so well against Holland in our first match. We led 3-0 until the 64th minute, and suddenly, everything fell apart. Perhaps, the boys are still to recover from that defeat, and we went on to lose two other matches," he said in Amstelveen.

"There is no spark in the team. The passion is missing and I am not happy with their recovery. Perhaps, the fact that several key players were ill at the camp in Lucknow and have not recovered fully, might have affected our performance too."

India, pre-tournament favourites, have lost three of their four matches so far ruling themselves out of contention for top honours.

"We lost the matches due to our own mistakes and we are all responsible for our poor performance so far."

Rajinder Singh felt that the players have lost focus, considering the number of scoring chances they messed up in each of the four matches so far.

"We had played extremely well in Australia and Hamburg recently, and frankly, it is difficult to explain the sudden loss of form of our players," he said.

"Our forwards have not been able to force penalty corners and like I said earlier, the mid-field play continues to worry me. But more importantly, the boys do not seem to be able to recover from a defeat, and I do not see the passion in them," he said.

When asked whether a sports psychologist could help the players come out of the depression, Rajinder said: "I don't think we need a psychologist. I mean look at other teams like Australia and Holland. They do not have one (psychologist) and yet they have been playing well."

Regarding the physical fitness of the players, he said: "They appear to be very tired. I spoke to the physio (Sampath Kumar) and he felt that some of the players who fell ill in Lucknow might not have sufficiently recovered."

IHF May Bring In Foreign Coach