The Bard Has Flown

Formally trained as both a Shakespearean actor and a Kathakali dancer, he fuses the two classical forms into his own style, Khelkali, which he uses to take aim at power and invert it. 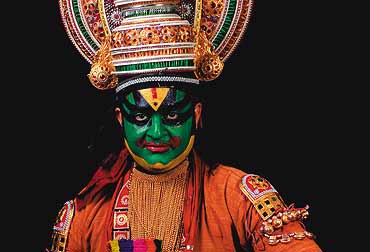 The whippings that Arjun Raina received at St Columbus School did not turn him, in the long run, into an obedient man. Formally trained as both a Shakespearean actor and a Kathakali dancer, he fuses the two classical forms into his own style, Khelkali, which he uses to take aim at power and invert it. In A Midsummer Night’s Dream, Oberon and Titania fight over a little Indian boy from the Malabar Coast, a Kerala prince. In his Khelkali performance, The Magic Hour, Raina wrings the colonial compliance out of that scene. He also treats Othello to a heavy dose of anticolonial medicine—strong enough to kill Iago instead of the Moor. "The naïve, noble savage wasn’t a worthy place to be. Shakespeare couldn’t show a white man being killed on stage—not by a black man. So we must symbolically kill Iago one time, and have that on record." It takes a green-masked man to not beware the green-eyed monster.

True or false: you began directing yourself because you thought there weren’t any good directors in India?

No, what I’m doing is freeing myself from the whole idea of direction, so there is only a process of creation. It counters the feudal view of performance, that it has one king, the director or the audience, for whom the whole performance is intended.

So you disaggregate an audience to dethrone it?

I dislike the aesthetic of making a vast audience become one person. A freer way is not to experience anything through one person, to sustain a multiplicity of responses. Then you can exercise power over them, you can play, you can mock, you can tease.

What about the affinity between Shakespeare and Kathakali?

At the same time Shakespeare was writing, the Kerala princes were creating Kathakali. In both worlds hierarchy and form were very important— rhythm and body, rhythm and word, iambic pentameter and paalam. You can take it from those larger brushstrokes of similarity to more playful specifics. Imagine the little Malabar prince in A Midsummer Night’s Dream growing up to create Kathakali. There are these fragile and magical links.

He has a place in the civil order. Shakespeare hijacks people’s attention. So does the arrogance of speaking English in a fantastic, aggressively self-confident way. For Shake-speare, the Oriental was magical, the Indian was magical—The Magic Hour has to grab attention and then invert all of that.

So you play Caliban to Shakespeare?

It’s more like Caliban performing Shakespeare and playing the role of Prospero. But at the same time, what he doesn’t forget is that the island is magical—though it isn’t Prospero’s version of magic but his own.