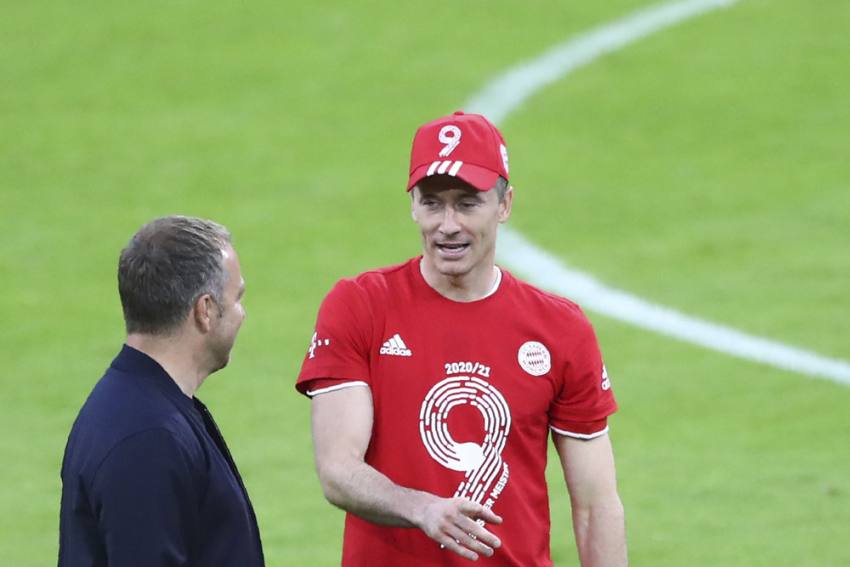 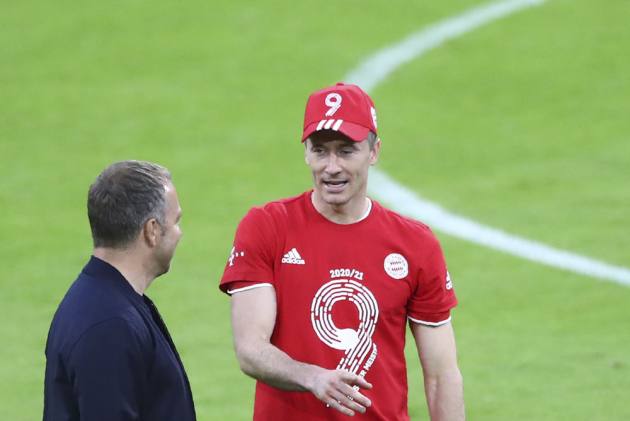 Borussia Dortmund's earlier defeat of RB Leipzig meant Bayern had their 30th Bundesliga crown sealed before kick-off on Saturday, and though no fans were in attendance at Alianz Arena, Hansi Flick's team nevertheless put on a party befitting of their achievement.

Lewandowski was sensational, scoring twice in the first half as Bayern stormed into a 4-0 lead – Thomas Muller and Kingsley Coman also on target – before netting his 39th league goal of the season from the spot, taking him to within one of Gerd Muller's all-time single-season record.

A red card for Tanguy Kouassi somewhat marred Bayern's second half, though Leroy Sane rounded off the rout late on.

It took just 111 seconds for Bayern to take the lead. David Alaba's cross fell to Lewandowski and, with unerring accuracy, he arrowed his quickest ever Bundesliga goal across Yann Sommer.

Lewandowski twice headed over either side of Coman hitting the post, but Bayern did not have long to wait to double their lead – Muller's effort deflecting in off Denis Zakaria after fine build-up play from Jamal Musiala.

It was 3-0 11 minutes later. Having seen a goal-bound effort blocked, Muller looped a cross to the back post, where Lewandowski was on hand to dispatch an acrobatic volley between Sommer and upright.

Lewandowski turned provider for Bayern's fourth on the cusp of half-time, laying it off for Coman to lash home.

With Muller having squandered a great chance, Florian Neuhaus was harshly adjudged to have handled from Leon Goretzka's header after the hour, and Lewandowski made no mistake from the resulting penalty.

Kouassi was introduced in the 70th minute, yet he was heading back down the tunnel within four minutes, the referee deeming his challenge on Breel Embolo worthy of a red card.

The numerical disadvantage hardly bothered Bayern, who had their sixth when Serge Gnabry teed up fellow substitute Sane.

What does it mean? Nine and counting for Bayern, but Muller and Alaba into double figures

Flick may well be leaving at the end of the season, but he departs having led Bayern to seven titles in the space of 18 months.

Bayern have won 16 league titles since 2000, and have now matched deposed Serie A kings Juventus for the longest streak of domestic championships won by teams from Europe's top five leagues. The pressure is now on Julian Nagelsmann to keep up the dynasty next term.

Meanwhile, Muller and fellow stalwart Alaba – who is departing at the end of the campaign – have each won 10 Bundesliga titles.

Muller's long-standing Bundesliga record for the most goals in a league season (40, set in 1971-72) is surely set to be broken by Bayern's magnificent number nine.

Lewandowski had scored just four goals in 905 minutes of league action for Bayern against Gladbach, but tore Marco Rose's team to shreds. With two games remaining, it seems a near certainty that the Poland star will deservedly put his name into the record books.

Kouassi's fifth Bundesliga appearance was one to forget.

The 18-year-old defender received a pat on the back from his coach and sporting director as he left the field, but his lunge on Embolo had to be punished. It was not a malicious tackle, but he was clearly the last man, and he left the pitch having attempted just the one challenge – the foul which saw him receive his marching orders.

- Bayern have scored in each of their last 69 games in all competitions, further extending the German record.
- Lewandowski celebrated his 249th win in a Bundesliga match, surpassing Claudio Pizarro as the foreign player with the most victories in the competition.
- Lewandowski has now scored 201 Bundesliga goals for Bayern. After Gerd Muller (365 for Bayern) he is only the second player in Bundesliga history to score 200+ goals for a single club.
- Coman and Muller both ended their 10-game runs without a goal in the Bundesliga.
- Musiala provided his first assists in the Bundesliga. Only Toni Kroos was younger when he assisted his first goal for Bayern in the Bundesliga.

A trip to Freiburg is next up for Bayern, while Gladbach host Stuttgart in a mid-table match-up.