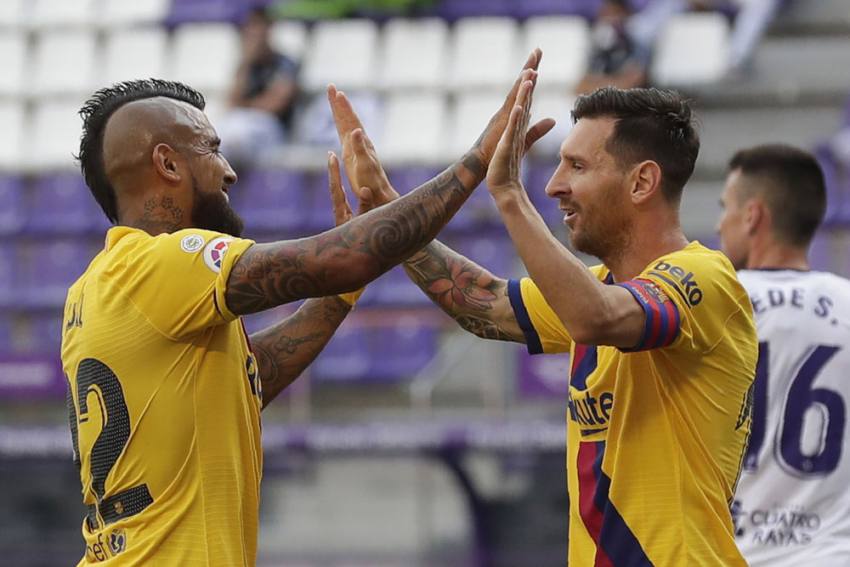 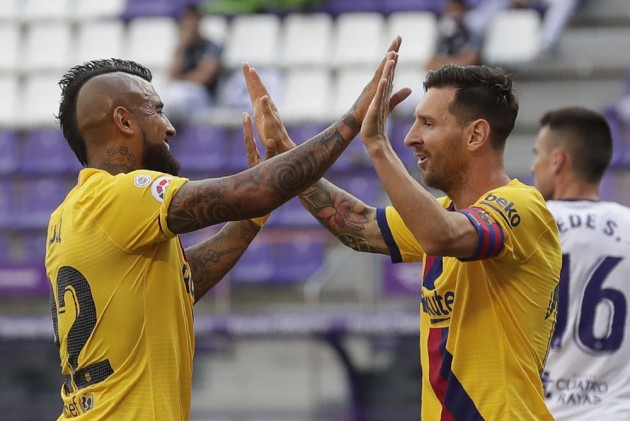 Barcelona will keep Real Madrid waiting for the coronation that is surely coming their way after Arturo Vidal's strike secured a 1-0 win at Real Valladolid. (More Football News)

The gap at the top of LaLiga is down to a single point, but Madrid can go four clear with two rounds of games remaining when they face Granada in their game in hand on Monday.

Lionel Messi provided the killer pass that gave Vidal the chance to strike the 15th-minute goal that sank Valladolid, a 20th assist of the league season for the Argentinian.

Had Barcelona failed to win Saturday's game at Estadio Jose Zorrilla, Madrid would have had the opportunity at Granada to clinch the title with two games to spare. Now it cannot come until Thursday at the earliest.

20 - Barcelona’s Lionel Messi is the second player to score 20 goals (22) and provide 20 assists in a single season in the Top 5 European Leagues in the 21st century after Thierry Henry (24 goals and 20 assists in 2002/03 for Arsenal. History. pic.twitter.com/Zy5bsplSoG

Worryingly for Barcelona, they came into this game with just three wins from their last nine away games in LaLiga, but nerves were soon calmed by Vidal's fine finish.

The Chilean midfielder received a lovely dink through from Messi and quickly got away a shot low across goal, his strike going in off the left post.

Messi's assist made him the first player to reach the 20 mark in a single campaign in the Spanish top flight since Xavi in Barcelona's 2008-09 treble-winning year.

Taking into account his 22 goals this term too, Messi can hardly be blamed for Barcelona missing out on the title.

Antoine Griezmann, however, chosen ahead of Luis Suarez for this game, continues to flatter to deceive.

He squandered an early half-chance before missing a sitter four minutes after Barcelona's breakthrough, getting his feet in a pitiable tangle when Nelson Semedo's skidding low cross from the right reached him eight yards from goal.

Full-back Semedo had a thumping shot saved by Jordi Masip before Barcelona were thankful for Kike Perez stumbling after getting in behind their defence as the hosts sought an equaliser.

Suarez unsurprisingly replaced Griezmann for the second half, with coach Quique Setien looking for more from a Messi sidekick than the Frenchman had been able to provide.

Perez, Javi Sanchez and Enes Unal all had chances for Valladolid but could not make them count, with Marc-Andre ter Stegen kept busy, while Messi saw a free-kick tipped over by Masip, the king of the assists always a threat.

What does it mean? Madrid party on hold

Barcelona are still in the title race - just. They need a royal Real stumble, but Zinedine Zidane's side have looked infallible since the league restarted so few expect that to happen. Barcelona are unbeaten since football returned in Spain, but three draws have cost them dearly.

Valladolid are safe for another season in LaLiga, and they could count themselves unfortunate here, having plenty of chances but finding Ter Stegen on top of his game.

It is nine goals and four assists for Griezmann in his first season at Barcelona, and you would not count on him adding to that tally over the final two rounds. Here he was ponderous one moment, miskicking the next, and he must be feeling the frustration as much as anyone. Acquired amid much rancour, he has failed to deliver what Barca expected and perhaps owes them some Champions League heroics now.

If their goalkeeper had not been at his most alert, Barcelona could have shipped two or three goals in the second half of this contest. Ter Stegen got lucky at the end of the first half when Perez fell over when he looked set to score, but the German showed why he is so valued at Camp Nou with a string of late blocks.

The end of the LaLiga season is nigh. These teams are both next in action on Thursday, in the penultimate round of games, with Barcelona at home to Osasuna and Valladolid travelling to Eibar.

Juventus 2-2 Atalanta: Cristiano Ronaldo On The Spot To Spare Serie A Leaders