Ahead of Chelsea's FA Cup semi-final with Manchester City, we look at how Mason Mount has kicked on under Thomas Tuchel

When FIFA last year announced they were set to introduce limits on the number of players teams could send out on loan, unsurprisingly many people's first thoughts turned to Chelsea. (More Football News)

At the time, the Blues remarkably had 28 players at other clubs, though this was by no means a recent trend: in 2018-19 that figure was 41.

The 'hoarding' of talent might be a solid ploy when looking to stunt the growth of a rival team or generate long-term revenue on Football Manager, but in the real world it was a practice that had long attracted criticism.

While by no means the only club in the world to have lots of young players out on loan, Chelsea have – rightly or wrongly – arguably been the most synonymous with it.

Some feel this has directly contributed to the club's struggles in developing homegrown talent because they have so many players, whereas others believe it offers a greater number of individuals the chance to play first-team football at a higher level than the Under-23s.

Putting aside some of the moral issues, Mason Mount falls into the latter category and proves there is a route to the first team through the fog of war for Chelsea's loan army.

By his own admission Mount needed an extra kick when he was in Chelsea's Under-23s as an 18-year-old, and that led to his temporary switch to the Eredivisie with Vitesse Arnhem, where he won the club's Player of the Year award.

But it's unlikely even he realised how important his next move would be as he linked up with Chelsea great Frank Lampard.

In at the deep end

Mount made 44 appearances across all competitions for Derby County in 2018-19 as they missed out on promotion in the play-off final, but regardless of that ultimate disappointment it proved a massive year for both he and Lampard.

With Maurizio Sarri departing Stamford Bridge to join Juventus despite Europa League success, Lampard was brought back to the club as head coach. Given his status and the trust he placed in young players – and, more pertinently, young players owned by Chelsea – at Derby, Lampard was seen as the ideal candidate to guide the team through a transfer embargo by bringing through homegrown talent.

Whether or not Lampard was a success as Chelsea coach is a discussion for another time, but his faith in Mount was unquestionable, chucking him straight into the team on the first day of the 2019-20 season. 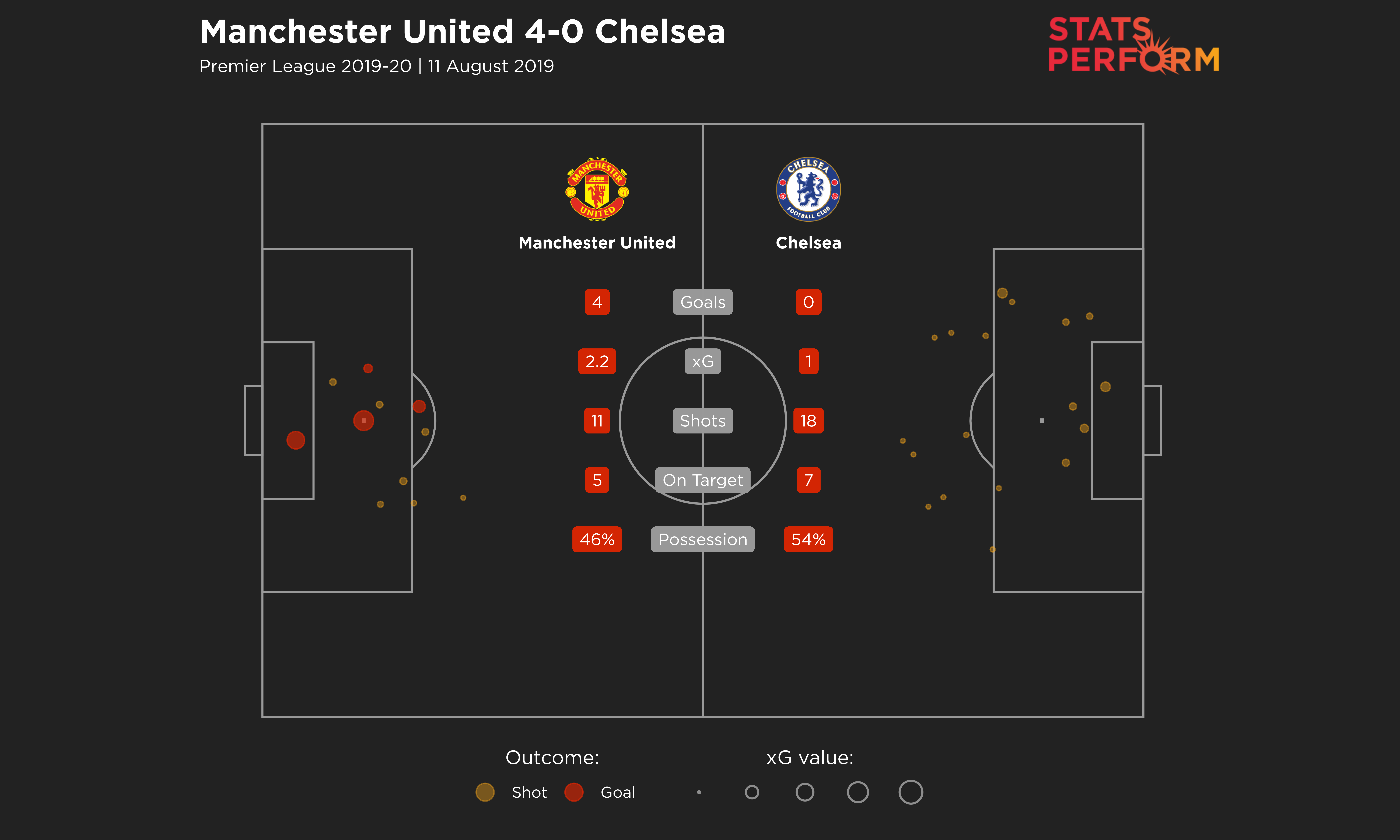 The Blues suffered a rather harsh 4-0 defeat at Manchester United, but Mount didn't look out of his depth in the Premier League, playing four key passes over the course of the match.

He never enjoyed a more productive Premier League game in terms of chances created in 2019-20, while he finished the season with 12 goal involvements (seven scored, five set up), a figure bettered by only Tammy Abraham (18), Willian (16) and Christian Pulisic (13) in the Chelsea squad.

Similarly, Willian (76) was the only Chelsea player to lay on more key passes over 2019-20 than Mount's 52 and he appeared in more league games than any of his team-mates (37).

But those points don't quite tell the whole story. To say he was consistent throughout the season would be a lie, as after the turn of the year there was a growing sense of frustration regarding his form. Between the start of November and the final day of the season, his three assists amounted to a couple of corner deliveries for Antonio Rudiger to head home, and a free-kick against Arsenal that Bernd Leno made a mess of. Mount's one open-play assist of 2019-20 came on the final day of the season against Wolves. 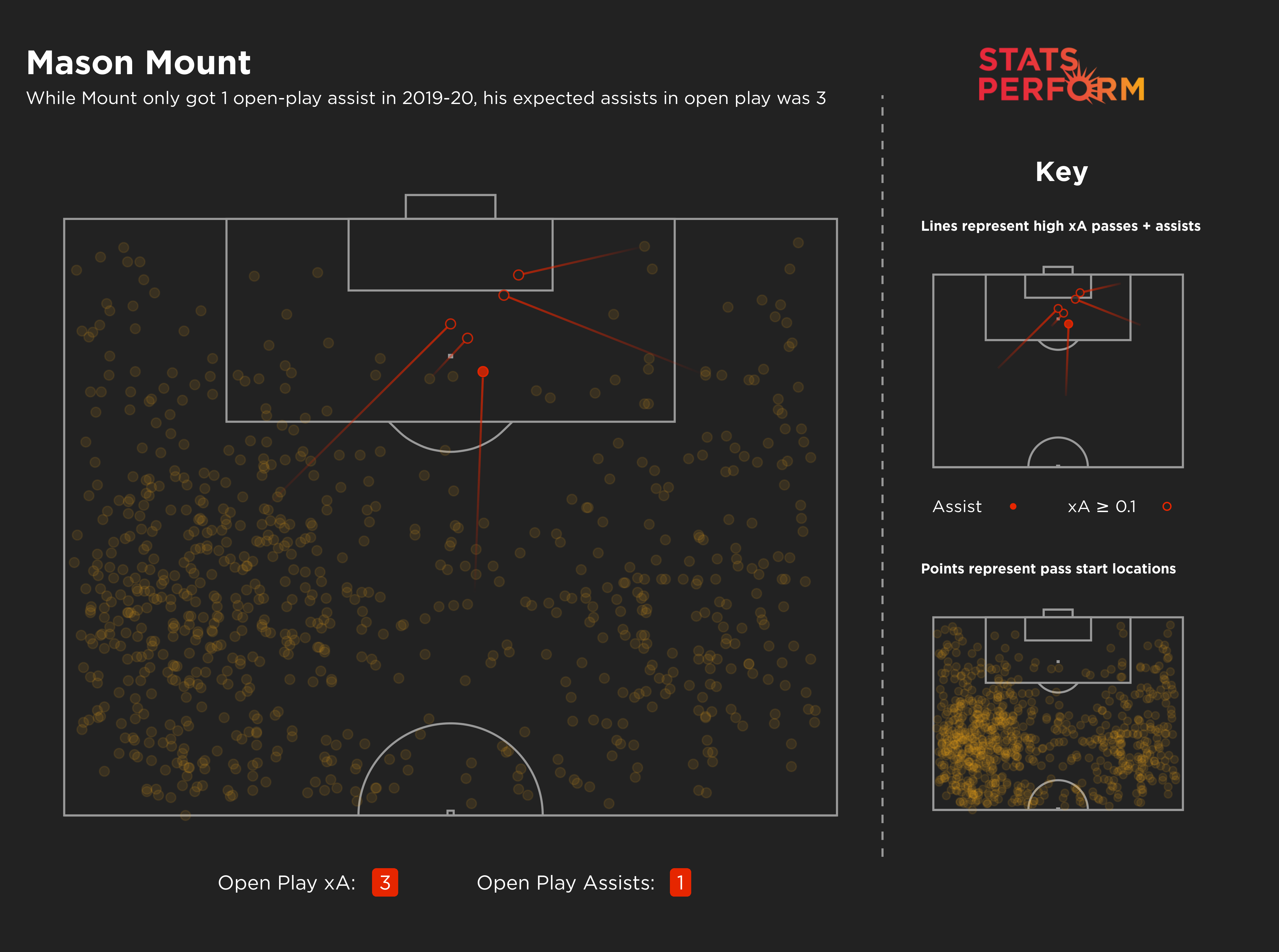 Some felt Mount was being over-worked by Lampard, others put his issues down to being used in a variety of roles – one week he'd occupy a central midfield position, the next he could be deployed as a winger and then he might play as a No.10.

The "teacher's pet" tag began to raise its head, with Lampard's almost incessant use of Mount leading to suggestions of preferential treatment.

A star of his own merit

When Thomas Tuchel was hired as Lampard's replacement in January, there wouldn't have been too many particularly worried for Mount's future given he had been a fixture in the team.

But when Mount was dropped for the German's first game in charge, Tuchel's decision certainly made people sit up and take note.

While he explained it away as opting to go with experience, dropping Mount suggested for arguably the first time since his return from Derby that he had a fight on his hands.

But it would be fair to say he's risen to the challenge.

Since then, he's become more productive almost across the board in the final third under Tuchel than he had been for Lampard in 2020-21. 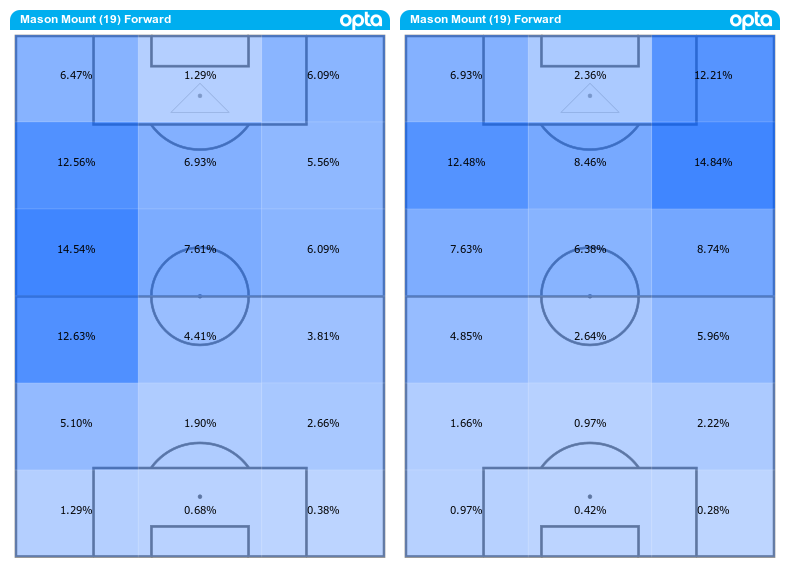 Seemingly one of the main contributing factors is his role. While Lampard used Mount in numerous positions, Tuchel has largely deployed him further up the pitch in an attempt to get him closer to the opposition's penalty area – activity maps show a significant change between the two coaches' usage of the 21-year-old.

Not only is he involved in passing moves more often as a result, he's contributing to sequences that end in a shot with greater frequency as well. His 72 (7.8 per 90 minutes) during Tuchel's 12 Premier League matches is the second highest in the division since the German's appointment, while his 96 (5.6 per 90 minutes) involvements in Lampard's 18 top-flight games this term was the eighth most.

The expected goals value from these sequences has increased too, going from 0.43 to 0.65 per 90 minutes, meaning Chelsea are creating greater quality chances with Mount further up the pitch.

Furthermore, there's been a considerable improvement in his own productivity. While his chance creation record in the past may have been skewed by set-pieces, he's moved up the rankings in terms of open-play key passes per 90 minutes. With 1.5 each game, only 12 others have done better than Mount since Tuchel's arrival – beforehand, his 1.2 per 90 minutes had him 43rd in those rankings. 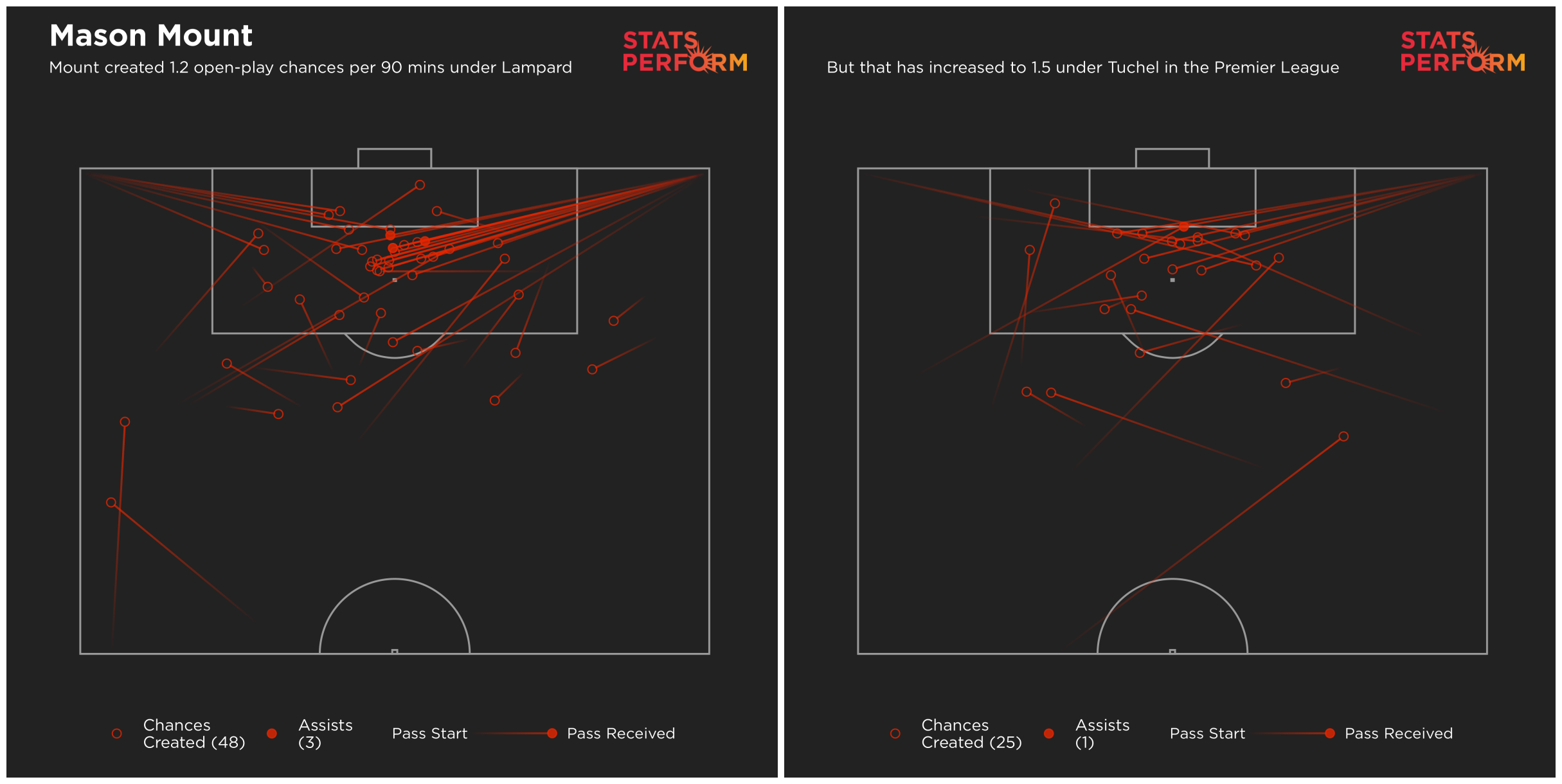 While he may still be without a single open-play assist in 2020-21, it's clear to see that Mount's strong associative talents and ability to play tidily in busier areas of the pitch make him a real asset to Tuchel, who has acted quickly to shift the England international into a position that seemingly suits him better.

Scoring has been an issue for them, with the likes of Timo Werner and Kai Havertz continuing to struggle, and this has undoubtedly impacted Mount as his expected assists from open play is 3.5 - with more clinical finishing he wouldn't still be sat on zero. 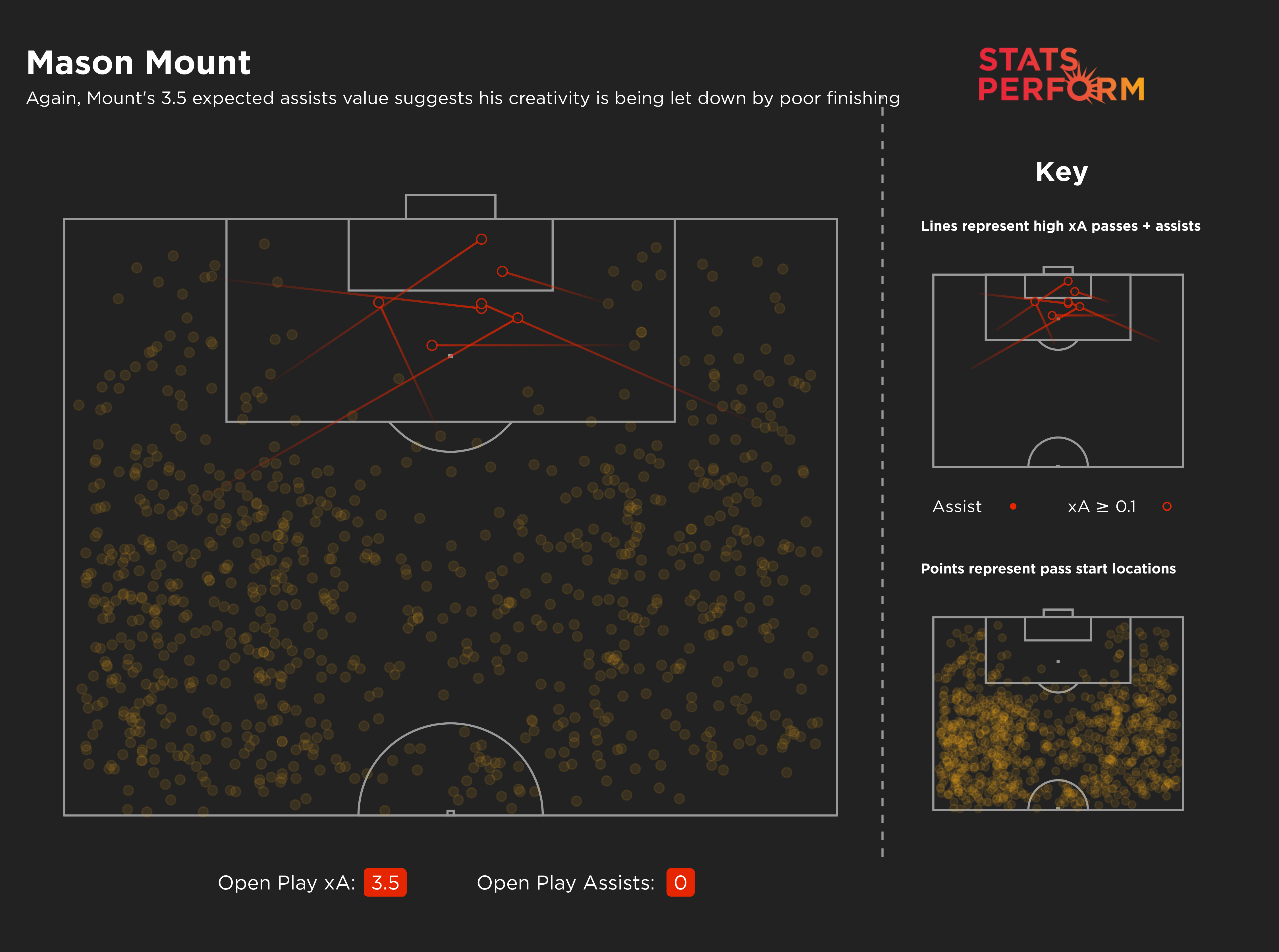 Mount's form lately seems to suggest that once Chelsea begin to click in front of goal, he'll be key to much of their build-up.

A homegrown beacon of hope

Throughout Roman Abramovich's time as Chelsea owner, the club has often found itself in a sort of purgatory – while they've undoubtedly wanted success and a first-team full of homegrown talents, it's difficult to say they've truly struck a balance between the two.

After all, since the start of the century, Chelsea products reaching 100 Premier League appearances for the club have been a rarity.

John Terry, of course, leads the way, but beyond him it becomes a bit murky. John Obi Mikel and Nemanja Matic perhaps come closest to fitting the bill, though both did play senior football elsewhere before joining the club as teenagers.

Granted, Mount remains a little way off yet as well having played 67 times in the top-flight for Chelsea, but he's quickly making up ground.

Not too far behind him are Tammy Abraham (56), Callum Hudson-Odoi and Ruben Loftus-Cheek (both on 54), while Andreas Christensen – at Chelsea since 2013 – has featured 70 times.

What's in store for their long-term futures at Chelsea remains to be seen – they are far less certain than Mount.

But Mount especially shows that where there wasn't much hope for young talent coming through at Chelsea in the past, now there is for arguably the first time in the Abramovich era.