An unbeaten 185-run stand between Rohit Sharma (117) and Ajinkya Rahane (83) helped India recover from three early wickets on a rain-curtailed opening day of the third and final Test against South Africa in Ranchi. Get here highlights of IND vs SA, 3rd Test, Day 1 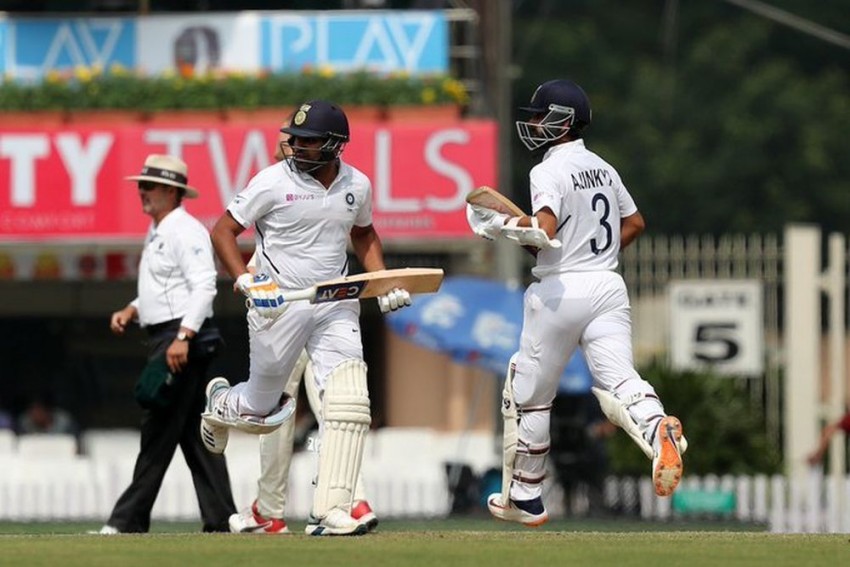 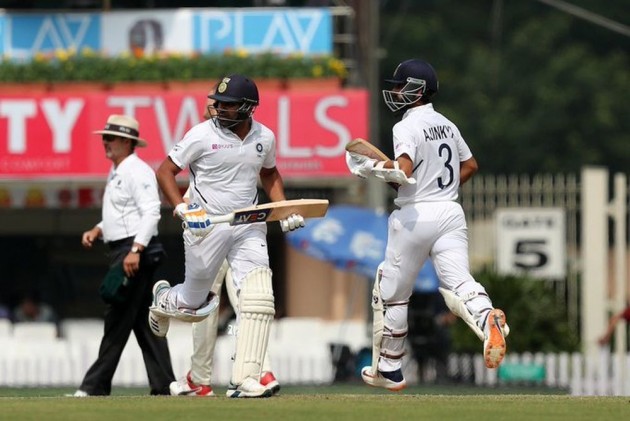 India were 224/3 before bad light followed by rain forced early stumps on Day 1 of the third Test against South Africa, in Ranchi on Saturday (October 19). After opting to bat first, India lost opener Mayank Agarwal (10), Cheteshwar Pujara (0) and skipper Virat Kohli (12) in the morning session. Rohit Sharma (117*), who scored two centuries in the first Test in Visakhapatnam, and vice-captain Ajinkya Rahane (83*) then revived India’s innings with an unbeaten 185-run stand for the fourth wicket. The hosts lead the series 2-0, having won in Visakhapatnam and Pune. Follow highlights of IND vs SA here (SCORECARD | CRICKET NEWS)

15:45 hrs IST: It's official then. Play has been called off for the day. Rohit remains unbeaten on 117, while Rahane's approaching the three-figure mark. India 224/3. What could help the Proteas on Sunday is that the ball is reversing big.

15:22 hrs IST: It has started to rain now. Don't think there could be any more play today.

Real Madrid will be without both Gareth Bale and Luka Modric for this weekend's La Liga match against Real Mallorca, Zinedine Zidane confirmed. Modric and Bale both picked up injuries during the Euro 2020 qualifier between Croatia and Wales last week, which finished 1-1. Wales coach Ryan Giggs suggested after the match that Bale was suffering with cramp in his calf but the forward has not trained with the rest of the Madrid squad this week.

15:00 hrs IST: The players are going off for the moment. The light has worsened. We'll have to wait for the situation to improve before the play can resume.

Meanwhile, member of the Supreme Court-constituted Committee of Administrator (CoA) Diana Edulji and the new apex council member of the Board of Control for Cricket in India (BCCI) Shantha Rangaswamy have questioned the "unconstitutional" appointment of the support staff of the women's national team in a letter to board CEO Rahul Johri. GM (Cricket Operations) Saba Karim, who is in-charge of women's cricket, is the one under the scanner for these appointments. READ HERE

With 17 sixes, Rohit has goes past Ben Stokes' 15 for the most sixes in Tests this calendar year.

14:33 hrs IST: We're back live. The light is quite poor at the moment, and the floodlights are on. Linde will start

STAT ATTACK - Rohit is only the second India opener to hit three or more 100s in a Test series. Sunil Gavaskar was the only previous Indian to do so, in three different series.

13:45 hrs IST: SIX! Tossed up delivery from Piedt, outside off, Rohit gets on his knee and smacks over wide long-off for a maximum. SIXTH TEST CENTURY AND THIRD AS AN OPENER FOR THE INDIAN. He was dropped on 28 by Zubayr Hamza. Piedt is proving to be expensive once again. Raises his arms and celebrates. What a knock! India are 184/3. Rahane 60*

13:37 hrs IST: SIX! There's a fielder at long-on, but Rohit decides to hit it over the same region. Picked it up from a length outside off, and deposits it into the stands. What confidence! Shades of Sehwag! India are 169/3. Rohit 91*, Rahane 55*

13:21 hrs IST: Piedt offers some flight, and Rahane works it to long on to complete his third half-century, his 21st in Tests. It's come in quick time, off just 70 balls. Eight boundaries in that knock. Raises his bat to the crowd and the dressing room. India are 149/3. Rohit 76*

13:13 hrs IST: FOUR! Overpitched from Ngidi, and Rohit drills this between short mid-off and the squarish mid-off for a boundary. Costly over from the pacer, eight off it. India are 147/3. Rohit 75*, Rahane 49*. The runs have come at a good pace as the duo have added 76 in an hour. Time for drinks!

Ngidi comes back into the attack

13:01 hrs IST: FOUR! Full from Linde, on the pads, Rohit gets close to the ball and flicks it past mid-wicket for a boundary. Magnificent shot! No protection in the deep. Not easy to play a shot against the spin. India are 128/3. Rohit 58*, Rahane 47*

12:39 hrs IST: FOUR! Full delivery from Nortje, doesn't get that much movement, and Rohit drives it past the bowler to long off for a boundary. Sublime! Brings up his half-century. Has been a high quality innings from the Mumbaikar. Can he hit his third century of the series? India are 115/3. Rahane 40*

Nortje comes back into the attack

12:19 hrs IST: FOUR! Length ball from Rabada, outside off, Rahane opens the bat face and helps it past gully. Intelligent from Rahane as he uses the pace on the ball. Keeps strike with a single off the last delivery. Poor over from the South African, 13 off it. India are 89/3. Rohit 42*, Rahane 25*

12:10 hrs IST: All in readiness to resume. Linde to start proceedings. First slip and short leg in place

South Africa's morning for sure. Rabada and Nortje have been brilliant, with some support from Lungi Ngidi. For the first time in this series, the South Africa bowling unit has posed some serious questions to the Indian batsmen. Rohit holds the key for the hosts. We'll be back in about 35 minutes. Stay tuned!

Get a feeling Rohit won't get a better opportunity to prove his worth to the team. India are 51/3. Rohit 23*, Rahane 6*

10:49 hrs IST: OUT! Fuller length, Kohli plays outside the line and is struck on the pad. Looks plumb. Kohli reviews but it will stay as umpire's call as replays confirm it would've hit the outside of leg. Kohli departs for 12 and India (39/3) are in trouble now. Ajinkya Rahane comes to the crease. He needs to play a big innings here

10:33 hrs IST: FOUR! Short from Rabada, Rohit. goes for the pull but doesn't get the timing. Lucky that he doesn't get a top edge. Gloves it away just past Klaasen down leg and it races away to the fine leg boundary. India are 29/2. Rohit 11*, Kohli 8*. Drinks are on the field now. Super contest with bat and ball in the first hour.

10:26 hrs IST: FOUR! Fuller ball from Anrich Nortje, down leg, and Kohli whips it to fine leg. Opens his account in style! Costly over from the South African, eight off it. India are 25/2. Kohli 8*, Rohit 7*

10:13 hrs IST: OUT! This one nips back in and strikes Pujara on the pad. Huge appeal for LBW, but not given. South Africa review! The replays show three reds. Pujara gets forward forward, and there is no bat involved. It hits him on the back pad, and is out. What a spell from Rabada! He's on fire. Virat Kohli comes to the crease. India are 16/2. Rohit 6*

09:52 hrs IST: OUT! A well-deserved scalp for Rabada. He has been superb this morning and it was only a matter of time before he broke through. A delivery swinging away from a length, draws Agarwal (10) forward. The Karnataka batsman looks to push this towards off-side but gets an edge and Dean Elgar, at third slip, takes a good, sharp catch low to his right. Cheteshwar Pujara comes to the crease. India are 12/1. Rohit 2*

Meanwhile, Gulam Bodi, who played three limited-overs internationals for South Africa, has been sentenced to five years in jail after pleading guilty to eight charges of corruption. The batsman had been banned for 20 years by national body Cricket South Africa (CSA) for his role in attempting to fix or influence matches in a domestic T20 competition in 2015. READ HERE

09:39 hrs IST: Nice and tidy over from Ngidi. No margin for error. Rohit off the mark with a single towards square leg. India are 7/0

09:35 hrs IST: FOUR! Fullish delivery from Rabada, hint of away movement, Mayank opens the bat face and it to the left of point for the first boundary of the day. India are 6/0. Agarwal 6*, Rohit 0*. Lungi Ngidi comes into the attack.

09:31 hrs IST: All set for live action. Rohit Sharma and Mayank Agarwal are at the crease. Kagiso Rabada to open the attack.

09:03 hrs IST: India have won the toss and have opted to bat

There is a bit of rain forecast during the game. It's likely to be overcast throughout with not much sun expected. Plenty of cracks on the surface, which means it will crumble. Expect a lot of turn.

Virat Kohli, India captain: “It's [11 successive home series wins] been nice, but looking at the larger picture, the Test Championship, every game has even more value. We're not going to take the foot off the gas in the third Test, we're looking for a result again, and hopefully, make it 3-0.”

Faf du Plessis, South Africa captain: "You have to be on top of your best game. If you are not, you are going to be found wanting and we were found wanting in this Test match."

08:25 hrs IST: Hello and welcome to Outlook's live coverage of the third and final Test between India and South Africa.

India Vs South Africa: Virat Kohli & Co Dealt A Blow On The Eve Of Ranchi Test