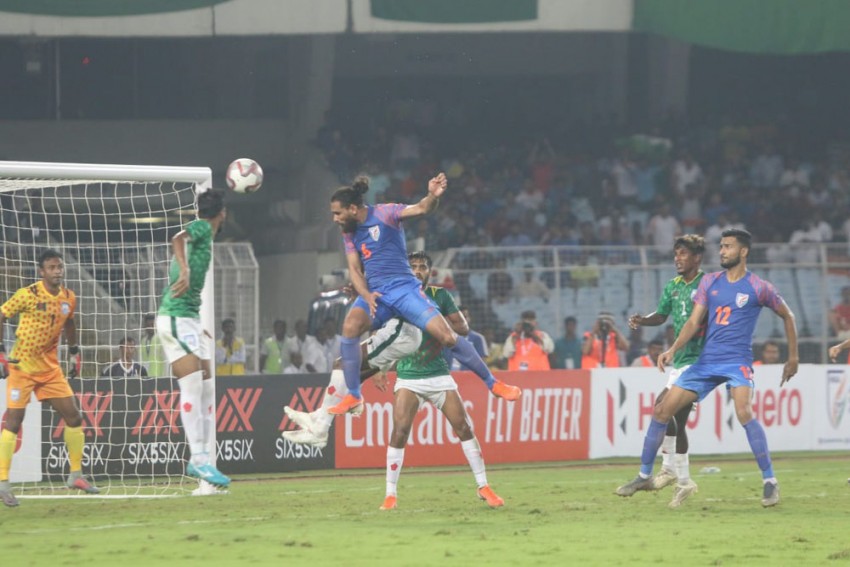 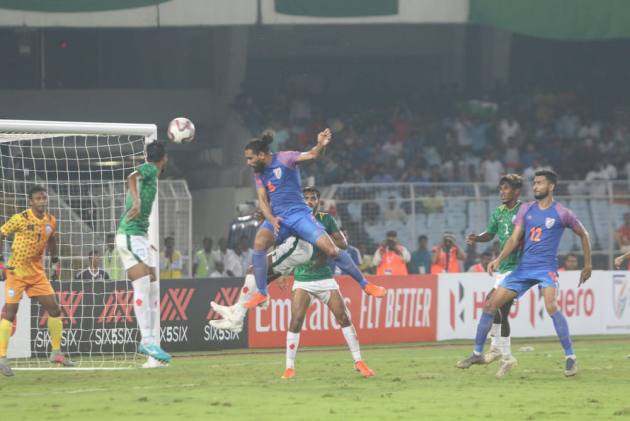 Adil Khan came to India's rescue with a towering header in the 88th minute to earn his side a gallant 1-1 draw against Bangladesh, at the Salt Lake Stadium. Both sides were aiming to notch their first victory of the ongoing 2022 FIFA World Cup qualification campaign, but had to settle for a point each. It was Bangladesh, who came into the match with a more aggressive, tactical approach and got the lead in the 42nd minute via a header by Saad Uddin. The visitors could have increased their lead many times in the second half, but lady luck had other plans for them. Looking set to return home with a precious victory, Adil found the back of the net via an 88th-minute corner kick taken by Brandon Fernandes. India weren't good enough against a highly tactical Bangladesh side, who were solid in attack and defence. Catch the highlights of India (IND) Vs Bangladesh (BAN) here.

21:28 hrs IST: FT' And the referee blows his whistle to wrap the match and its full time. A sub-par performance by India, but a brilliant display by Bangladesh. Both teams walk away with a point shared, and are still in search of their first victory of this 2022 FIFA World Cup qualification campaign.

The lanky striker received the ball at the of his opponent's box, but his volley was way too poor and ball skyrocketed towards the sky.

It was a looping corner kick from the left flank, and Adil Khan rose the highest and put in a piledriving header into the back of the Bangladesh net. Game on India!

21:17 hrs IST: 84:15' Another wayward cross by Kuruniyan. He receives the ball in the left flank, and sees a Bangladesh penalty box filled with Indian attackers. But his final balls goes straight towards the opposite corner flag for a throw-in.

Brandon receives a wayward Bangladesh pass near the opposition box, and tries to piledrive it towards goal, but it goes way too high. Poor accuracy by the FC Goa man.

21:11 hrs IST: 77:40' Good passing between Manvir and Chhetri, but again the end product goes missing as the former tries to find the latter with a cross inside the Bangladesh penalty box, but fails to do so.

Adil Khan comes to India's rescue. Bangladesh caught the Indian backline ball watching once again, and Gurpreet was caught off his line, with the ball being lobbed over him. It was Adil who rushed in, and made a goal-line clearance.

21:00 hrs IST: 67:29' Substitution for India. Raynier comes in for Thapa. A disappointing inconsistent night for the Chennaiyin midfielder.

That was an excellent through ball by Chhetri to Udanta, who runs towards the opposition box with electric pace and tries to find Manvir, who is in the penalty spot and just needs to tap it in, but horribly mistimes his run.

A curling corner comes in for the experienced defender, who puts in a perfect header but a Bangladesh player heads it away from the goal line. Just couldn't creep under the crossbar.

Chhetri attempted a freekick from near the Bangladesh penalty box. It was all set for him, but it was a wayward shot, which just didn't have enough accuracy or juice in it.

20:46 hrs IST: 53:17' Igor Stimac must be missing Sandesh Jhingan. The Kerala Blasters defender's presence was needed in this match, but an injury has sidelined him for atleast six months. Without him, the Indian backline is in shambles.

Udanta's volley hits a barrage of Bangladesh defenders. Its complete chaos inside the penalty box.

20:41 hrs IST: 47:55' Good dribbling by Sahal, as he dribbles down the right flank and goes past few defenders but his end product goes missing.

20:38 hrs IST: The referee blows his whistle for the second half! Can India find the much-needed equaliser?

20:20 hrs IST: HT' Its an emergency situation for India now! They are a goal down against a team ranked lower than them in the FIFA Rankings. Its a must-win game for India, if they wish to keep their 2022 FIFA World Cup qualification hopes alive. India has looked way too wayward, meanwhile, Bangladesh have looked more ambitious and spirited. As it stands, Bangladesh are en route to notching their first win of their 2022 FIFA World Cup qualification campaign.

It was a curling freekick from the left flank, and Gurpreet came lunging in within a crowded penalty box but completely misses it. Saad comes in and makes a diving header. What a goal from half a chance!

20:12 hrs IST: 37:55' Sunil Chhetri tries another header via a Anas longball, but he heads it straight towards Ashraful.

Bheke puts in a long throw from the right flank, Manvir battles a defender, uses his height to his advantage, and puts in a header with amazing technique, which Ashraful palms towards the crossbar and it goes for a corner.

Adil gets caught dreaming with the ball at his feet. Biplo steals it away and darts past him with his quick feet, and unleashes a venomous shot, which goes wide in a scramble between a Bangladesh attacker, Anas, and Gurpreet.

20:01 hrs IST: 27:40' Anas plays a good through ball to Udanta, who plays a pass to a teammate and makes a run forward and receives the ball. But his cut back to Manvir is of poor quality and gets cleared for a corner.

19:58 hrs IST: 25:00' A good set-piece by Thapa. He tries it to drill it to Chhetri, who attempts a run past the wall, but is held back. Good defending by Bangladesh.

19:53 hrs IST: 20:00' Poor control by Mandar! Chhetri comes in towards the half-line and receives the ball. He plays a good pass to Mandar, who poorly controls it in the left flank and gives it away.

Another header missed by Bheke in this match. Thapa lofted ina good corner for the Bengaluru defender, who headed it way too high!

19:49 hrs IST: 15:37' Anas tries to find Udanta with a through ball, but the arc of the pass is too much and it goes out. Bangladesh are playing a good shape and are making it hard for India to find any open spaces.

19:47 hrs IST: 14:00' Second corner of the game for Bangladesh. Bhuyan floats it into the box, Yeasin tries to head it but makes more of a defensive clearance in India's favour.

19:44 hrs IST: 09:36' India get their first corner. Chhetri tries to take it short, but an opposition defender clears it out. Chhetri takes the corner again and passes it to Mandar, who lofts it into the box, with Bheke making a complete mess out of it. What a chance!

Ibrahim tries to blaze past him and successfully does so, but the Bengaluru man runs from behind and attempts a tackle near his box, which looked like a foul but the referee didn't think so.

19:39 hrs IST: 06:20' India are being a little more patient now. They are passing around the ball and are trying to follow Stimac's philosophy of building from the back. Anas and Adil are trying to get things started but Bangladesh are applying constant pressure.

Anas lofts in a beautiful ball, which bundles around the Bangladesh penalty box and falls for Sunil, who pounces on it and hits it straight at the opposition goalkeeper.

19:33 hrs IST: 0:30' Early penalty appeal for Bangladesh! Bheke fouls Ibrahim on the byline, but the referee totally misses to see it and calls for a corner. Lucky India!

19:25 hrs IST: Both teams are walking into the stadium now for their national anthems. Chhetri leads India, Bhuyan leads Bangladesh!

19:21 hrs IST: The Salt Lake Stadium looks packed! The tricolor can be seen everywhere coupled with smiles and flashlights.

19:13 hrs IST: Gurpreet will need to be his reliable self once again, as he was in the goalless draw against Qatar. Bheke will need to be more confident on the ball. The Bengaluru man has been shaky in previous fixtures. Anas and Adil will need to form a partnership which hasn't been tested yet. Also, Mandar will need to be better in keeping the ball, as against Qatar, he gave it away plenty of times.

19:10 hrs IST: Under Igor Stimac, Sunil Chhetri has scored five goals in five matches. He has been India's headliner and could be the star once again. Starting Manvir Singh is a good tactical tweak by Igor Stimac. Manvir is expected to play as the solitary striker, with Chhetri playing between the lines as an attacking midfielder.

18:20 hrs IST: Stimac has a big decision to make regarding Sandesh Jhingan's vacant slot. Experts feel Anas Edathodika should partner Adil Khan at the heart of India's defence. Many also feel that young Narender Gahlot deserves a start, but is too error-prone and his inclusion could prove to be costly for the Blue Tigers.

18:05 hrs IST: During India's pre-match press conference, head coach Igor Stimac revealed that his side are not underestimating Bangladesh, who are ranked lower in the FIFA Rankings. India are ranked 104th, while the visitors are 187th.

Speaking to reporters, he said, "I wouldn't like any of you to underestimate Bangladesh. They have some very talented youngsters just like us. Don't make it worse and harder by underestimating them. Let's go into this game by being respectful to the Bangladeshi team."

Speaking to reporters, he said, "Obviously, Sunil is the most dangerous player because of the amount of goals he has scored. He's a super player, super player with a super goal-scoring record."

17:55 hrs IST: The probable front three of Sunil Chhetri, Ashique Kuruniyan and Udanta Singh will have a huge task in hand. Kuruniyan and Udanta's pace and trickery will help create goalscoring chances for Chhetri, and we could see them interchange roles multiple times, like we have seen them do in the past.

17:35 hrs IST: It is expected that youngster Narender Gahlot will start at the heart of defence in place of Jhingan, and Odisha FC midfielder Vinit Rai will fill in for Borges.

Bangladesh head coach Jamie Day doesn't have any injury concerns and has bought a full-strength squad. India and Bangladesh played out a 2-2 draw the last time they faced each other.

17:31 hrs IST: After impressive displays in their previous two fixtures, India (a draw and defeat) will be hoping to exploit the weaknesses of a Bangladesh team who haven't registered a single point in two group matches.

India will be without talismanic defender Sandesh Jhingan, who has been sidelined for at least six months due to an anterior cruciate ligament tear on his left knee. The return of Sunil Chhetri, who missed the big match against Qatar due to fever, is a relief for fans, as the team lacks a potent goalscorer without him. Youngster Amarjit Singh Kiyam is still ruled out due to an injury, which he suffered before the qualification phase began and Rowllin Borges is out due to multiple bookings.

17:18 hrs IST: Good evening everyone! Welcome to Outlook's 2022 FIFA World Cup qualifier live coverage of India Vs Bangladesh. The Blue Tigers will be hoping to register their first victory of the campaign at the Salt Lake Stadium, meanwhile, the visitors will be aiming to win their first point of this qualification phase.