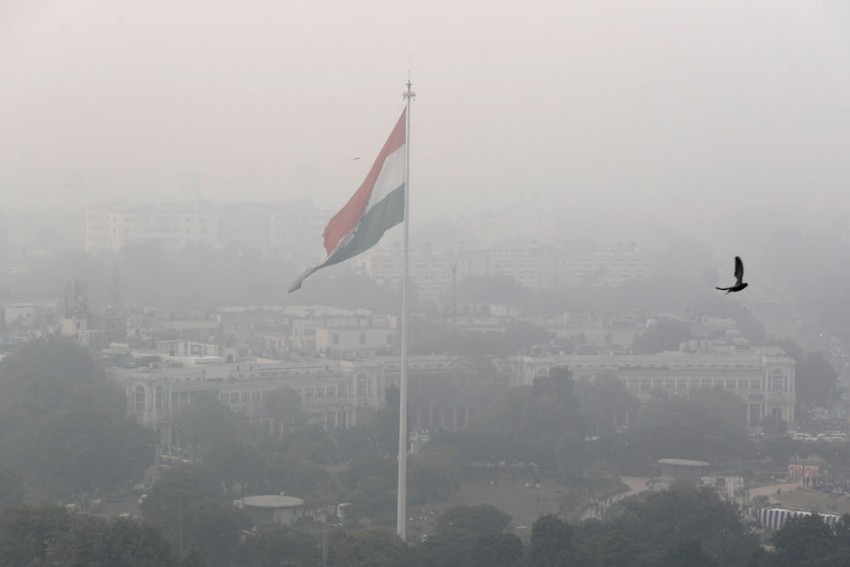 A bird flies past as Delhi's sky line is seen enveloped in smog and dust in New Delhi, India, Friday, Nov. 1, 2019. An expert panel in India's capital has declared a health emergency due to air pollution choking the city, with authorities ordering schools closed until Nov. 5.
AP Photo
IANS 2019-11-03T15:40:18+05:30 IND Vs BAN, 1st T20I: Light Rain Compounds Pollution Woes, Visibility Gets Worse Ahead Of Series Opener In Delhi 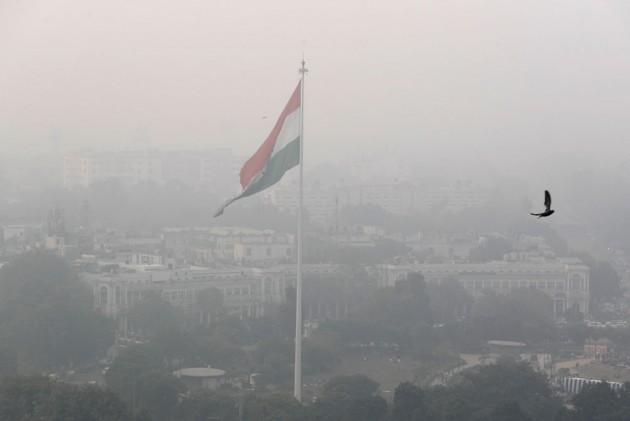 The light rain on Saturday evening has made the situation worse for the Delhi and District Cricket Association (DDCA) officials as the smog has gone from bad to worse in the national capital. With the opening T20I between India and Bangladesh set to be played at the Arun Jaitley Stadium in Delhi on Sunday, the DDCA officials and groundsmen are keeping fingers crossed that the smog settles down in time for the game.

Speaking to IANS, a senior DDCA official said that the groundstaff are helpless in such a scenario and it all now depends on nature and prayers.

"Contrary to the belief that showers on Saturday would have helped settle things down, today is the worst of the lot. The eyes are hurting and visibility is at an all-time low. Hopefully, the sun does come out and the smog settles else it will be very difficult to get the match going. We are helpless in such a scenario and can only pray that the match happens," the official said.

Asked if the call will be taken solely by the match referee, the official said it will involve the umpires and the groundstaff could also be consulted.

"The call has to be taken by the match referee and he will consult the umpires. They can also check with the groundstaff to decide on the fate of the match if the condition stays the way it is. But then again, you never know with the weather and things could change in the evening. But if you go by the current scenario, things are a little grim to be honest," he said.

With the Environmental Pollution (Prevention and Control) Authority (EPCA) on Friday declaring a public health emergency in Delhi-NCR due to severe air pollution, BCCI President Sourav Ganguly checked with India skipper Rohit Sharma if the team is comfortable with the conditions and the stand-in captain gave the chief the thumbs up.

Sources in the know of developments had said that there was a conversation between the two and Rohit informed Ganguly that they were having no problem.

Also Read: Could Shivam Dube Be Handed His Debut?

"The President checked with Rohit and the team is comfortable and there is no problem they had after a full-on training session on Friday. In fact, there is an optional training even on the eve of the game. The skipper has given the thumbs up to the BCCI chief," the source said.

In fact, even on Thursday Rohit made it clear that the air was no issue. "I have just landed and haven't had time to assess. As far as I know the game is to be played on 3rd and will be played. We didn't have any problem when we played the Test match here (against Sri Lanka). We are not aware of the exact discussion and I haven't had any problem," Rohit said.