Euro 2020: Mendes, Doku, Kounde And The 'Next Generation' Hoping To Make Their Mark

With Euro 2020 just around the corner, Here's look at 10 young players looking to make their mark at the tournament.

Euro 2020 has been a long time coming. Delayed by a year because of the coronavirus pandemic, the European Championship is less than a week away from kick-off. (More Football News)

While the disappointment of seeing such a major tournament postponed and pushed back in 2020 was significant for many football fans, the delay has arguably helped the prospect of having more young players involved.

Every international event has its star man, but they also have their breakthrough talents and youngsters on the scene for the first time.

READ: Euro 2020, Live Streaming: When And Where To Watch

Euro 2016 had the likes of Kingsley Coman, Joshua Kimmich, Young Player of the Tournament Renato Sanches and Marcus Rashford – the youngest individual to feature – enjoying their first experiences of such events.

Who will be their equivalents at Euro 2020?

Well, Stats Perform has identified 10 members of the 'next generation' either hoping to stake their claim for a regular spot in the team or announce themselves on the big stage.

Who has the strongest #EURO2020 squad?

It's no mean feat to establish yourself as a regular at club level as a teenage centre-back, a position that often requires maturity and composure, but Omeragic has done just that with FC Zurich, playing 48 league games for them since the start of 2019-20.

A tidy player in possession, Omeragic generally operates as the right-sided defender in a back three, and that suits him down to the ground with the national team, whom he has represented four times already.

If he does appear for Switzerland in the Euros, he'll become their second-youngest player to feature for them at a major tournament in the past 10 years, with Breel Embolo the only one to do so at a younger age (19 years, 118 days at Euro 2016).

The fact Kozlowski was even in contention for a place in the squad is a triumph in itself, given that he broke his pelvis and back in a car crash just last January. That he actually secured a place is truly remarkable.

Kozlowski is the next great hope of Polish football, having already made a name for himself back home at Pogon Szczecin, with whom he became the second-youngest player in Ekstraklasa history (15y, 215d). He then became the club's youngest league goalscorer (17y, 182d) in April with a diving header against Podbeskidzie.

That came a month after he made history with the national team, becoming their youngest ever player (17y, 163d).

Kozlowski is a technical gifted attacking midfielder, but don't let that lead to certain misconceptions – he's also an impressive physical specimen for his age and a feisty competitor.

Scandinavian countries are producing some bright attacking talents at the moment, and Wind looks set to be Denmark's contribution to the trend.

Wind has been a regular in the Copenhagen squad since he was a teenager, but in 2020-21 he enjoyed something of a breakthrough as he started 28 of their 32 league games.

His haul of 15 goals and eight assists was bettered by only one Danish Superligaen player and also shows his well-rounded nature.

A real unit, Wind is effective in the air, good at holding up play and also technically efficient. This blend of abilities – particularly his aerial prowess – could be a real weapon in Group B, which looks as though it could be a tight one.

If there's one teenager who looks likely to spark a post-tournament bidding war among Europe's biggest clubs, it's arguably Hlozek, who appears to be a serious talent.

At Sparta Prague, he initially started out as a winger because of his direct style of play and dribbling abilities, but those skills have transferred particularly well to a more central berth this term, where he has also been able to make the most of his impressive build.

Despite missing a chunk of the season through injury, Hlozek's still managed to plunder 15 Liga goals in just 19 matches, and in April became the competition's youngest hat-trick scorer with his treble against Opava.

He then finished the season with an astonishing four-goal haul against Zbrojovka Brno to finish as the league's joint-top scorer, though he also had six assists to his name. The 18-year-old is a complete striker if there ever was one, and he could be a wonderful wildcard option for Czech Republic if he overcomes a pre-tournament injury.

Hopes are high for Zabarnyi, not just with Ukraine, but at club level as well. Currently playing for Dynamo Kiev after coming through their academy and making his debut just last September, the highly regarded centre-back is already attracting interest from abroad, with Chelsea supposedly among those keen on him.

Zabarnyi was one of only two Dynamo players to play every minute in the group stage of the 2020-21 Champions League (540), along with Tomasz Kedziora, highlighting just how trusted he already is by the Ukrainian champions.

The nine clearances he made in December's 1-0 win over Ferencvaros was more than any other Dynamo player in a single game in the 2020-21 edition, while his 34 across the group stage was bettered by only seven defenders. While some might point out such metrics tend to favour those in so-called lesser teams, it's worth mentioning the likes of Marquinhos, Antonio Rudiger and Stefan Savic were among the few with more clearances than Zabarnyi.

His distribution can still be problematic when under pressure, but he does possess a cool head on the ball – Zabarnyi certainly has the potential to be a mainstay for Ukraine in the coming years, and hopefully he'll get an opportunity at Euro 2020.

With Belgium the big favourites to advance from Group B, there's going to be a three-way tussle for second (and third) between Denmark, Finland and Russia. Those three could be quite well-matched, with their contests looking difficult to call either way.

Mukhin's destructive tendencies could be key towards the end of games if Russia are under pressure but still in with a chance of victory, with the 19-year-old recording the best minutes-per-tackle rate (one every 19.8 minutes) among all players to feature at least 10 games in the Russian Premier League in 2020-21.

Young he may be, but Mukhin won't be overawed by the occasion having made his Champions League debut with Lokomotiv Moscow this season, catching the eye in his solitary appearance – a 3-1 defeat by Salzburg in which he made four tackles (bettered by only one player on the pitch) and three interceptions after coming off the bench at half-time, evidence of his defensive capabilities.

An energetic and competitive midfielder, Mukhin – who has agreed to join CSKA Moscow for next season – could be a real asset for Russia, if not now then almost certainly in the future.

Granted, Kounde is perhaps a level above the rest here in terms of how established he already is at club level with Sevilla, but it's worth noting he only got his first senior cap since the domestic season ended.

His form with Sevilla has helped him jump up the queue somewhat, with the Bordeaux youth product getting into France's squad ahead of Bayern Munich-bound Dayot Upamecano.

Kounde won't go into the tournament as first choice, but he is an interesting option at centre-back should France need – or want – a change.

A progressive and positive defender, Kounde's 624 carries (defined as movements of at least five metres with the ball) was bettered by only Pau Torres, while he carried possession forward to the tune of 3,908.8 metres across the campaign, a figure only two defenders could improve on in LaLiga this term.

He's also a keen distributor with 3,172 attempted passes – Edmond Tapsoba is the only player younger than him to try more (3,509) across the top five leagues. Potentially set for a big move away from Sevilla this year, making the most of any opportunities at the Euros won't hurt his chances.

It seems as though most young talents these days have a backstory that includes almost joining one of Europe's biggest clubs – Doku is no different, having opted against signing for Liverpool back in 2018.

A player who dreams of joining Barcelona, Doku definitely looks primed to have an impact for Belgium at the Euros. An explosive winger to his very core, the teenager has just enjoyed a fine debut campaign at Rennes in Ligue 1.

While his goal involvements return of five (two goals, three assists) is modest, his ability on the ball makes him a nightmare to defend against. In fact, of the players to attempt 200 or more dribbles in the top five European leagues this term, he's one of just three to boast at least a 60 per cent success rate – the other two are Lionel Messi and Adama Traore.

Raw, for sure, but if you want a livewire to inject a little unpredictability to you team, you can count on Doku.

Italy are back in the big time after missing out on the 2018 World Cup, and much of the scoring burden will fall on Ciro Immobile and Andrea Belotti. But if they aren't doing the business, Sassuolo's Raspadori offers a considerably different alternative.

A nimble and technically gifted forward, Raspadori does not have great physicality on his side, so Italy might need to adapt their game slightly if he's in the attack as opposed to Immobile or Belotti, but he is more likely to dribble past his man.

That's certainly not all he's good at, though. While his return of six Serie A goals is by no means remarkable, four of those were scored in his final six games of the season and among Italians to net five non-penalty goals or more this term across all competitions, Raspadori's conversion rate of 37.5 is the best. 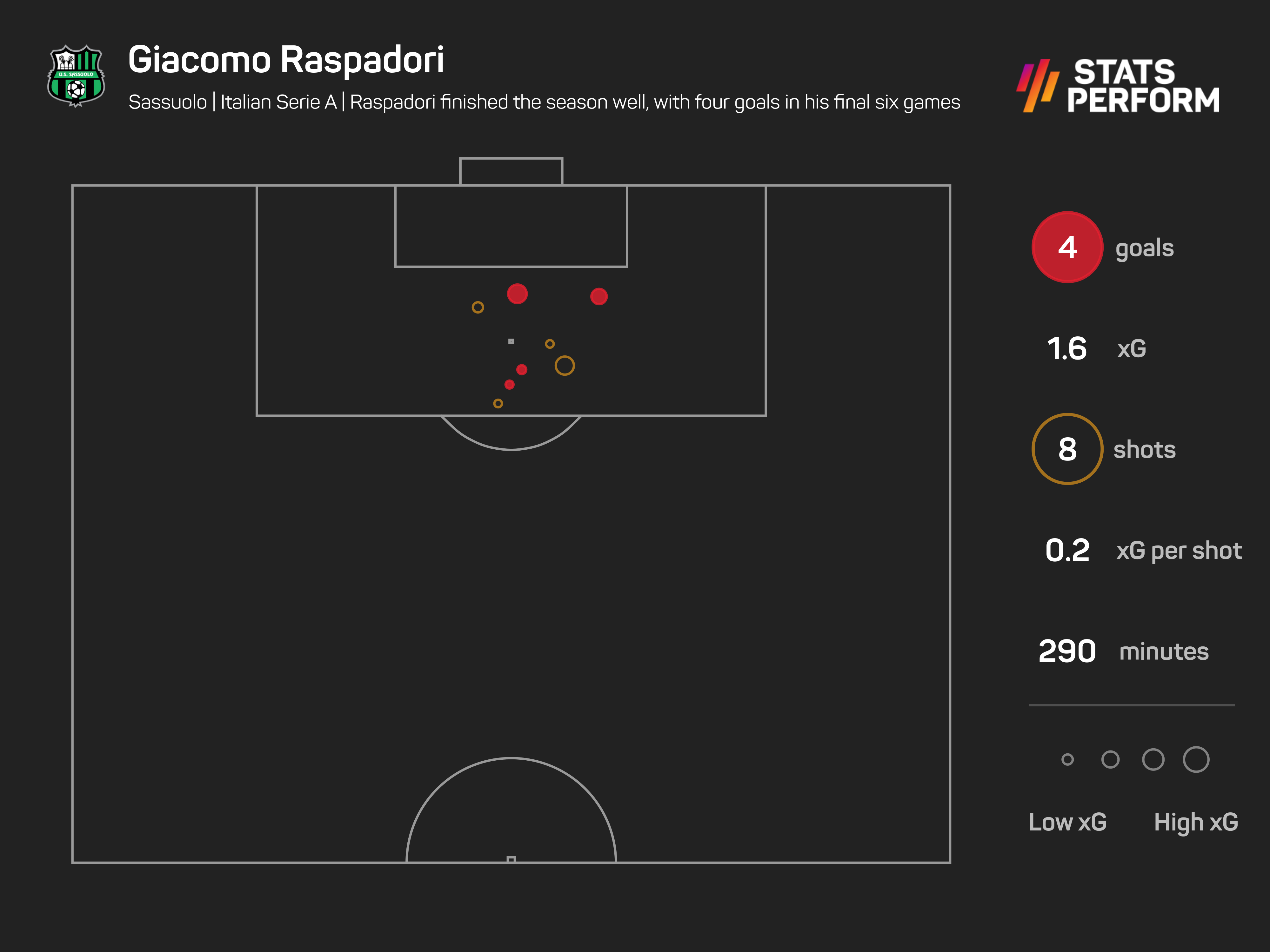 A key player in the Sporting CP side that won the club's first league title since 2001-02, Mendes looks set for a big future.

The teenage left-back has already been strongly linked with the likes of Real Madrid and could be the ideal long-term replacement for Marcelo, such is Mendes' skillset.

He was the only teenage defender to create 30 or more chances (31) across the Portuguese Primeira Liga or any of Europe's top five leagues in 2020-21, proof of just how effective he can be and his forward-thinking nature. He also offers good deliveries from set-pieces.

He'll likely be back-up to Raphael Guerreiro at the Euros, but he's certainly not there just for the ride – he can have an impact if given the chance. 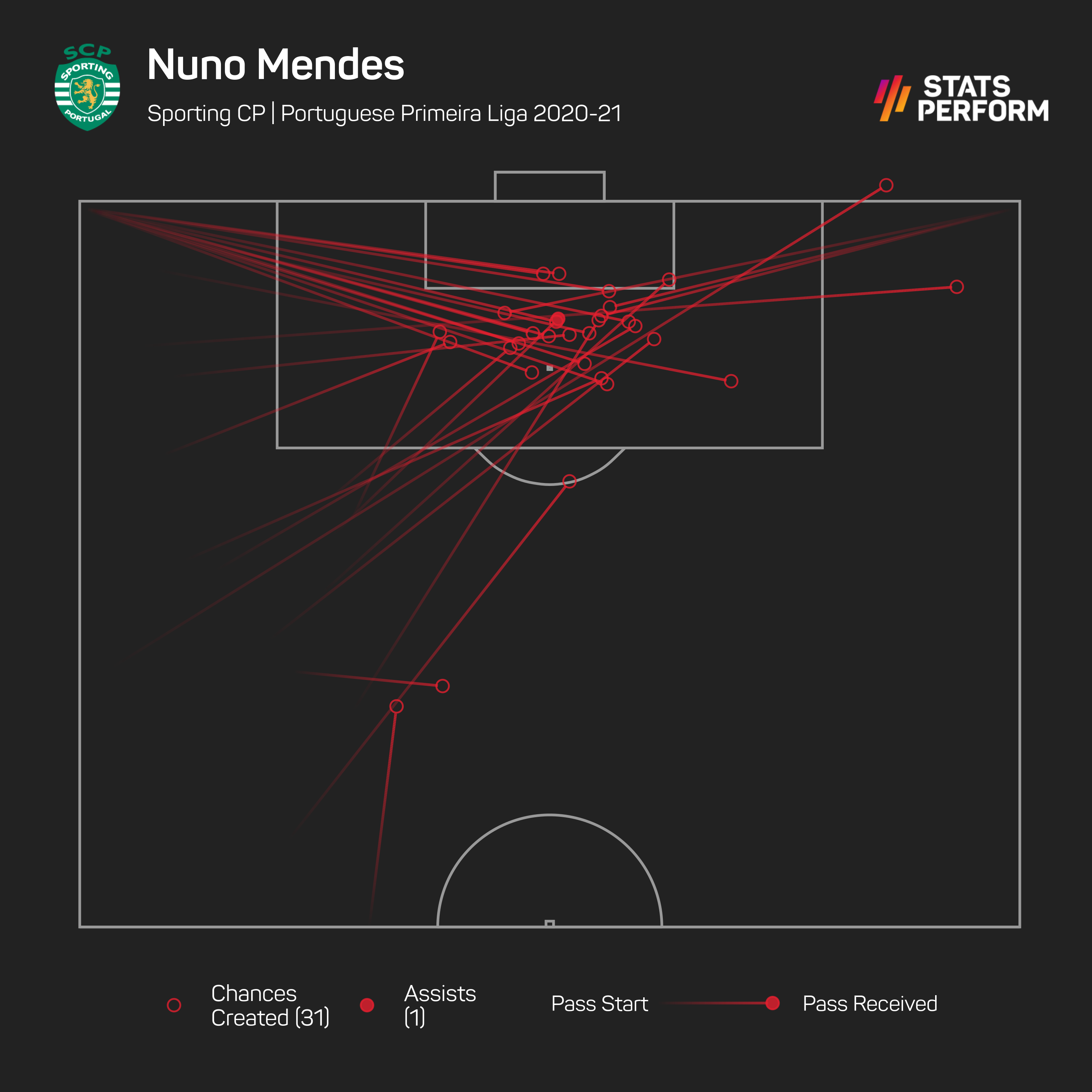