Anthony Martial and Harry Maguire scored either side of half-time as Manchester United claimed a 2-0 triumph over Chelsea on Monday. 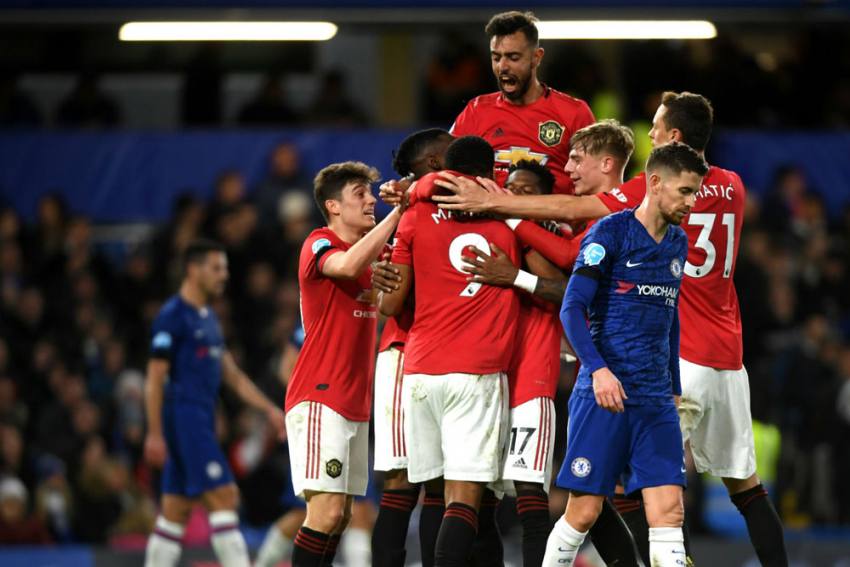 Manchester United have completed their first league double over Chelsea since the 1987-88 campaign, while this is the first time they have done so without conceding since 1964-65.
Getty Images
Omnisport February 18, 2020 00:00 IST Chelsea 0-2 Manchester United: Anthony Martial, Harry Maguire Boost UEFA Champions League Hopes 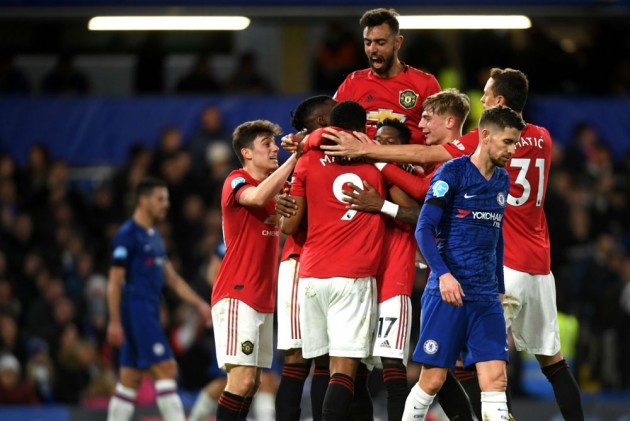 Manchester United closed ground on the Champions League places as Anthony Martial and Harry Maguire struck to claim a vital 2-0 win over Chelsea, who were twice denied by VAR.

Despite heading into Monday's meeting at Stamford Bride having taken just four points in 2020, Ole Gunnar Solskjaer's side moved to within a win of their opponents as they completed a Premier League double over Chelsea for the first time.

Martial continued his excellent form against Chelsea to get United off the mark, with the Blues denied an equaliser through Kurt Zouma by the video review system.

United made their luck count in the 66th minute with captain Maguire – who was perhaps fortunate to be on the pitch after an earlier clash with Michy Batshuayi – heading in Bruno Fernandes' corner and United held firm to secure valuable points after Olivier Giroud also saw a goal disallowed.

7 - Chelsea have lost seven home games in all competitions this season, their most in a single campaign since 1994-95 (also seven). Breached. #CHEMUNpic.twitter.com/ubK1FiABVl

Chelsea were inches away from taking a sixth-minute lead when Reece James lashed wide, but Frank Lampard's side were dealt a blow when N'Golo Kante was forced off through injury in the 12th minute.

Maguire was lucky to go unpunished for kicking out at Batshuayi, who subsequently squandered a brilliant chance after terrific work from Mason Mount.

Yet for all Chelsea's threat, it was United who had the lead when Martial headed in Aaron Wan-Bissaka's excellent cross.

Chelsea thought they had equalised when Kurt Zouma tucked home from a corner, only for VAR to disallow the goal for Cesar Azpilicueta's push on Brandon Williams.

And, after Fernandes had struck the woodwork with a superb free-kick, Chelsea's frustrations were compounded as Maguire headed beyond Willy Caballero.

Giroud's header seemed to have set up a grandstand finish, but VAR again came to United's rescue. Mount then hit the post as the Blues' efforts proved fruitless, with Caballero preventing substitute Odion Ighalo netting a debut goal in stoppage time.

200 - Odion Ighalo is the 200th player to make an appearance for @ManUtd in the @premierleague, and is the first Nigerian to do so. Cinematic. #CHEMUNpic.twitter.com/n5j9W2R7nf

What does it mean? Toothless Chelsea allow the chasing pack to catch up

Chelsea looked safe in fourth place earlier in the campaign but, after a run of just one win in six league games, they are just a point above Tottenham – who they play next – and three above United in seventh, with Sheffield United wedged in sixth place.

Martial scored twice in the corresponding fixture last season and now has four goals in his past three league appearances against Chelsea. He is the first United player to score in three consecutive Premier League matches against the Blues.

3 - Anthony Martial is the third @ManUtd player to score home and away Premier League goals against Chelsea in the same season, after Wayne Rooney in 2011-12 and Eric Cantona in 1992-93. Nod. #CHEMUN

It has been an injury-hit season for Kante and, after he hobbled off early on, the France international could now be a doubt for crucial fixtures against Tottenham, Bayern Munich and Liverpool in the Premier League, Champions League and FA Cup respectively.

He was not the only player lost to injury, with Andreas Christensen having to be replaced by Zouma at half-time.

- Manchester United have completed their first league double over Chelsea since the 1987-88 campaign, while this is the first time they have done so without conceding since 1964-65.

- Chelsea have lost seven home games in all competitions this season, their most in a single campaign since 1994-95 (also seven).

- Chelsea have lost all five of their home league games when conceding the first goal this season; only two other sides have failed to recover a single point at home when conceding first in the Premier League this season (Norwich City and West Ham).

- Chelsea became just the second side to have two goals awarded and then overturned by VAR in a Premier League match this season, after Sheffield United against Brighton and Hove Albion in December.

- Harry Maguire scored his first Premier League goal for United; each of his past four strikes in the competition have been away from home, with this his first since January 2019 at Liverpool.

- Ole Gunnar Solskjaer has won all five of his away games as United manager against Chelsea and Manchester City in all competitions, more than the Red Devils had won in their previous 19 such games under Alex Ferguson, David Moyes, Louis van Gaal and Jose Mourinho combined.

A potentially huge clash in the race for a Champions League place comes up next for Chelsea, who face Spurs on Saturday, while United are in Europa League action against Club Brugge two days earlier.