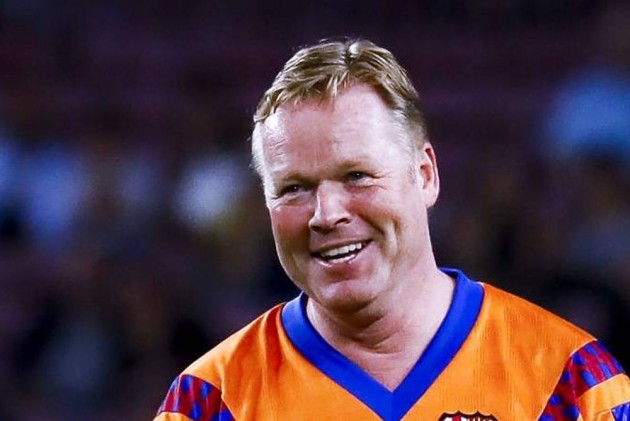 Former Barca defender Koeman arrived in the city on Monday to sign a contract as successor to Quique Setien, who was sacked after the 8-2 Champions League defeat to Bayern Munich.

Koeman, who has been in charge of the Netherlands since 2018, was part of the hugely successful side under Johan Cruyff that came to be known as the 'Dream Team', scoring the winner against Sampdoria as Barca became champions of Europe for the first time in 1992.

Bartomeu hopes the 57-year-old can restore some lustre to a Barca dressing room reeling from a sorry end to a disappointing season.

"These days, everything comes out in the press," he said to Barca TV. "If nothing goes wrong, Koeman will be the coach we'll announce who will lead this team and these players forward, with a different project and with a coach who the fans know well, not only as a player but also as a coach.

"We're backing him because we know him really well in terms of how he is and how he thinks and how his teams play, but also because of his experience, for being in Johan Cruyff's 'Dream Team'. He knows Barca and the way to understand football."

Really tough times. Culers, I feel really sorry for what happened yesterday. I’m disappointed. I don’t want to search for excuses - because there are none. We definitely need to change. pic.twitter.com/2kUIFiKY7F

Koeman admitted this year he turned down Barca's advances after they sacked Ernesto Valverde in January, citing his commitment to leading the Netherlands into Euro 2020.

ALSO READ: Koeman To Replace Setien As Next Barcelona Manager

However, with that tournament having been pushed back to 2021 and still uncertain to go ahead due to the coroanvirus pandemic, and Koeman having undergone heart surgery this year, his perspective on taking the job has changed.

Bartomeu has admitted they spoke with Koeman as early as last December, at which point he made it clear he did not want to leave his national team facing a race to find a replacement ahead of the Euros.

"In December, we spoke with different coaches to see who could come. At that time, we denied it because we couldn't explain things. I can say now," Bartomeu said.

"Koeman told us he had a responsibility to the Netherlands and could not leave them without a coach, but he was the first coach we contacted. Now, he's told us the Euros are very far away, we're in a pandemic and we don't know what will happen to competitions.