Arsenal were kept at bay for 42 minutes by Dundalk before ultimately easing to a comfortable Europa League victory. 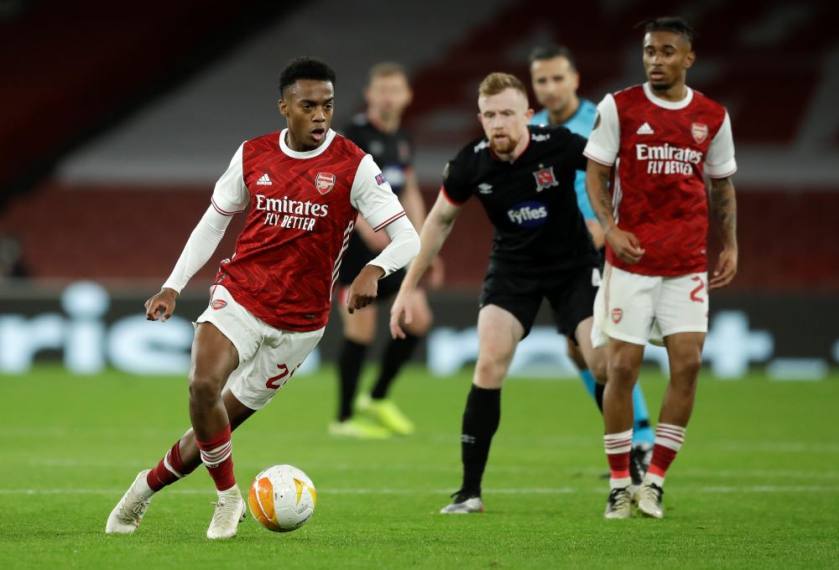 Arsenal's Joe Willock looks to pass the ball during the Europa League Group B match against Dundalk in London on Thursday.
AP
Omnisport 2020-10-30T12:43:49+05:30 Arsenal 3-0 Dundalk: Gunners Ease To Victory After Nketiah Breakthrough In Europa League 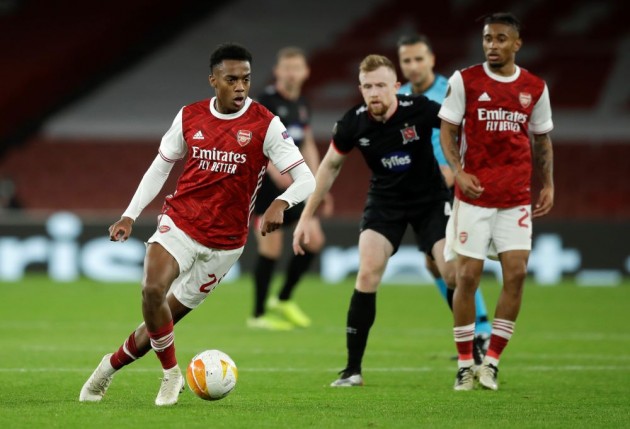 Arsenal made it two wins from two in this season's Europa League group stage as they beat Dundalk 3-0 at Emirates Stadium.

Mikel Arteta made 10 changes to the side that lost 1-0 at home to Leicester City last weekend and they were kept at bay for 42 minutes by an effective Dundalk rearguard until Eddie Nketiah pounced on a goalkeeping error.

Joe Willock doubled the lead before half-time and Nicolas Pepe's super strike put the Gunners firmly in control, allowing them to ease through the closing stages with one eye on the weekend trip to Manchester United.

Patrick McEleney tested Alex Runarsson with the first effort of the match as Dundalk showed they were prepared to work the ball forward rather than simply clear their lines.

Arsenal unsurprisingly controlled possession yet found it difficult to pick their way through a packed visiting defence, but Nketiah got the breakthrough three minutes before half-time, turning home from point-blank range after goalkeeper Gary Rogers made a mess of an attempted punch.

Dundalk were punished further 125 seconds later, Willock firing high into the net after Nketiah and Pepe led a swift break in the visitors' half.

Any faint thoughts of a comeback were quashed just a minute after the restart, Pepe taking a clever touch and curling a fine effort into the top-right corner from the edge of the Dundalk box.

Nketiah just failed to prod a cross beyond Rogers from Cedric Soares' cross, and the lively Reiss Nelson teed up Kieran Tierney to blast over, but the fight was gone from the Irish champions.

6 - Nicolas Pépé has been directly involved in six goals for Arsenal in the Europa League (eight appearances), with all of his goals coming at the Emirates (three) and all of his assists coming away from home (three). Backlift. #UEL pic.twitter.com/rNhUQQDWw1

What does it mean? Arsenal cruising towards knockouts

With six points from two games, Arsenal are already firmly on track to reach the next round as they prepare for back-to-back meetings with Molde.

Arteta might not have been thrilled with their first-half performance, but this was still an efficient job by a much-changed Gunners side – and this time, Pierre-Emerick Aubameyang was not needed.

Willock's finish was excellent but his all-round performance from one box to another was even better. He broke lines to stretch Dundalk's rigid defence, created three goalscoring chances and teed up Pepe for his finish.

Having looked set to take a stalemate to half-time, a missed punch from the experienced Rogers gifted Arsenal their opener and the visitors never quite recovered their composure. It was a disappointing way to spoil their excellent early work.

16 - Arsenal have had 16 shots in the first half against Dundalk, the most attempts they have had in the opening 45 minutes of a game since October 2017 against Everton (17), under Arsene Wenger. Firing. #UEL pic.twitter.com/kzFMBIhX4n

- Under Mikel Arteta, Arsenal have lost just one of their 13 games in cup competitions (W10 D2), a 1-2 defeat against Olympiacos in February.
- Dundalk are the first side to avoid committing a single foul in a Europa League game (2009-10 onwards).
- Nicolas Pepe has been directly involved in six goals for Arsenal in the Europa League (eight appearances), with all of his goals coming at Emirates Stadium (three) and all of his assists coming away from home (three).
- Arsenal have won all nine games in which Eddie Nketiah has found the back of the net (10 goals).
- Goalkeeper Alex Runarsson became the first Icelandic player to appear for Arsenal since Olafur Ingi Skulason against Wolves in December 2003 in the EFL Cup.