In what proved to be a somewhat unconvincing Manchester City display, Raheem Sterling's second-minute header secured a 1-0 win over Arsenal 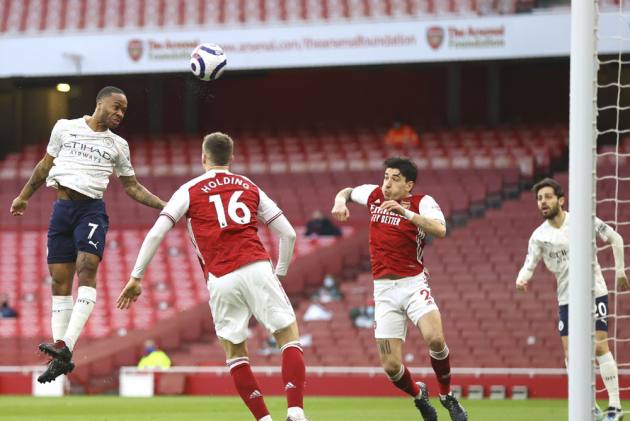 Hunting an eighth straight win over the Gunners, City made a supreme start which was capped by Sterling's 13th goal of the season for the club in all competitions.

After 30 minutes of dominance, City rather took their foot off the accelerator, though Ederson only had one save to make as City maintained their superb defensive record.

Though they ultimately laboured to victory, City have now won their last 18 games across all competitions, and their march towards the title is showing no sign of slowing.

Sterling had been involved in six goals in his last five Premier League appearances against Arsenal heading into Sunday's game, and he added to that tally inside the opening two minutes.

Having already sliced wide, Sterling was left unmarked to leap up and glance Riyad Mahrez's cross from the right beyond Bernd Leno.

Sterling has only scored more league goals against Bournemouth than against Arsenal, and he would have had a second in this game if not for Leno's later save.

Though City's assault continued – Ilkay Gundogan and Mahrez squandering presentable chances – Arsenal, driven by Bukayo Saka, wrested some control as the first half went on.

Kevin De Bruyne's lob landed wide early in the second half, while Leno was at full stretch to deny German compatriot Gundogan.

Cancelo looked set to atone when he found space in the box, only to prod wide, though City kept Arsenal at arm's length to ensure the full-back's miss did not cost them as their remarkable run rolled on.

What does it mean? City stumble, rather than stomp, to another victory

A 10-point lead at the top of the Premier League shows City's commanding grip over their rivals. Since losing 2-1 at Emirates Stadium in December 2015, City are unbeaten in their last 11 Premier League meetings with Arsenal, who have not been a factor in this year's title race.

The Gunners sit in 10th – 25 points shy of City. Arsenal have now won just three of their last 19 Premier League games when facing the side who started the day of the match in top spot (W3 D4 L12).

Sterling shoots down the Gunners yet again

Sterling has now been involved in more league goals than any other City player this season (14 – nine goals, five assists), while he has scored home and away against Arsenal in each of the last two seasons.

After a stuttering start to the season, Pierre-Emerick Aubameyang has come up big for Arsenal lately, and he went into the game looking to become the first Gunners player to score two goals in three consecutive league starts since Derek Tapscott in March 1956.

However, you will not get many goals if you do not manage a shot, and Aubameyang did not have one effort throughout the match, while he also failed to create any chances.

- Arsenal's eight-match losing run to City matches their worst string of league defeats to an individual opponent, having also endured an eight-game run versus Leeds United between 1973 and 1976.

- City have equalled the record for consecutive away wins by an English top-flight team across all competitions (11), which was previously set by Guardiola’s side between May and November 2017.

- City are unbeaten in their last 25 games across all competitions (W22 D3) – their second-longest run without defeat under Guardiola, following a 28-game spell between April and December 2017.

- Since the start of last season, no player has scored more away goals than Sterling in the Premier League (20). Sterling’s total is twice as many as City’s second-highest away scorer in this period (Jesus, 10).

- City’s opener after 75 seconds was the first time they have scored in the opening two minutes of a Premier League game since December 2019, which was also away at Arsenal (Kevin De Bruyne after 89 seconds).

Both sides are in European action in midweek – City facing Borussia Monchengladbach in the Champions League on Wednesday, while Arsenal travel to Athens to face Benfica in the second leg of their Europa League tie.