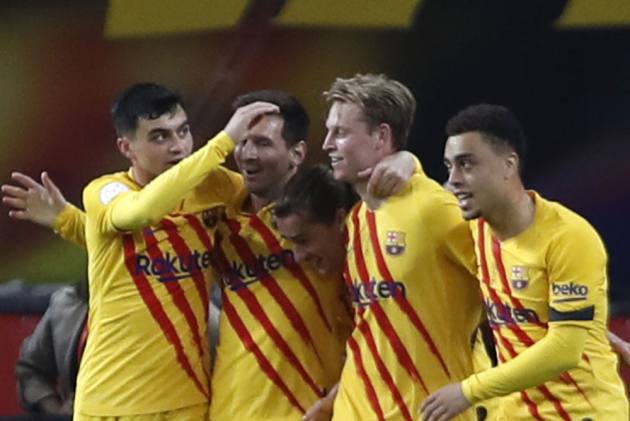 Antoine Griezmann accepts Lionel Messi's future is "not in our hands" but hopes Barcelona's inspirational captain can be convinced to remain at Camp Nou. (More Football News)

Messi was in typically brilliant form with a brace as Barca hammered Athletic Bilbao 4-0 to win the Copa del Rey on Saturday, the Blaugrana's first trophy under Ronald Koeman.

Griezmann had started the rout with the opening goal on the hour, with Frenkie de Jong doubling Barca's lead.

Messi's future at Los Cules, where he is the club's all-time leading goalscorer, remains the subject of debate with his contract up in June and Manchester City and Paris Saint-Germain still rumoured to be interested in putting together a lucrative deal for the Argentina great.

Newly-re-elected president Joan Laporta spoke of his hope that Messi, who tried to engineer a move before the start of the campaign, will stay put and Griezmann echoed those sentiments.

"It is not in our hands.  It is he who will decide, but we are proud and happy of the have with us and hope he will stay."

Griezmann joined Barca from Atletico Madrid in a big-money deal ahead of the 2019-2020 campaign. The Copa triumph represents the first trophy since he joined Barca but LaLiga success remains a realistic prospect, with only two points separating Koeman's third-placed side and leaders Atletico Madrid.

"I am very happy and very proud," he added. "I have been in the Spanish league for 10 years and I had not won the Copa del Rey.

"It's a relief, for the club and for me too, he said. There have been ups and downs since I arrived, sometimes negative comments, sometimes unfair, but it's like I have always worked and with the team we were focused on this game since we knew each other in the final."