Patrick French hunts out Naipaul's 'lost' oeuvre -- four short stories, a radio play and the only poem he has ever written, broadcast from London to the West Indies just after his 18th birthday, Two Thirty A.M. 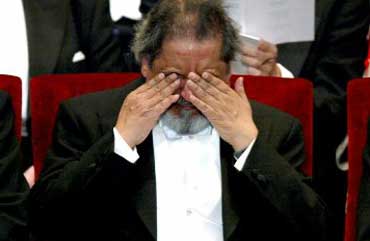 Wasn't it Fitzgerald who said that in the long dark night of the soul, it's always three in the morning? Sir Vidia seems to have agreed in his first and last poem, Two Thirty A M, written as "an adolescent cry of pain" broadcast from London to the West Indies just after his 18th birthday:

Darkness piling up in the corners
defying the soulless moon ...
it is neither today’s tomorrow
nor is it tonight’s last night
but now
and forever
and you are scared
for this is forever
and this is death
and nothing
and mourning.

And who else but the celebrated author of Liberty or Death and Naipaul's official biographer, Patrick French (who had turned down an Order of the British Empire last year because the honour contains the word "empire" and to maintain his "independent" status) should be the one to hunt it out?

"It was as if he had seen a ghost," writes French in London's Sunday Times of January 18,  "Visibly moved, he said to me that Two Thirty A M had been written at a time of childhood despair, and commented, ‘I never wrote another poem’."

In the 1970s, when Naipaul first began to be talked about as a possible Nobel Prize winner, writes French, he had lodged his papers, including four short stories, a radio play and a poem in a London warehouse. "When he came to retrieve them a few years later they were gone, incinerated accidentally because of an administrative error. Anything not already in print had disappeared forever. Although this destruction may not match the burning of the library at Alexandria in its importance, it was a substantial literary loss."

What is really surprising, though, is that no serious effort seems to have been made before this to hunt out the early Naipaul output. Since Naipaul had worked for Caribbean Voices, a BBC Colonial Service programme for aspiring writers from the West Indies, after leaving Oxford,  French delved into the BBC archives in Caversham and "managed to locate his 'lost' oeuvre."

"Preserved on grainy microfilm are four short stories, a radio play and the only poem he has ever written, broadcast from London to the West Indies just after his 18th birthday. The poem is entitled Two Thirty AM, the radio play is called B Wordsworth and the short stories are This is Home, Potatoes, Old Man and A Family Union."

The BBC, French notes, "like the Stasi (the Rumanian secret police), was good at record-keeping."

On This is Home, French comments: "Like the poem, the story is ponderous and laden with uneasy symbolism. Yet it contains key themes -- dislocation, poverty, homelessness and the relationship between men and women -- that Naipaul would take up a decade later in his famous novel A House for Mr Biswas."

"Although these stories lack the technical skill of Naipaul’s early novels, French argues, "they offer a crucial bridge in our understanding of his development as a writer."

"The most entertaining lost manuscript is a radio play called B Wordsworth, which tells the story of a Trinidad chancer and poet, Black Wordsworth (‘White Wordsworth was my brother. We share one heart’) and his relationship with a young boy and his mother. It was adapted from a chapter in Naipaul’s then unpublished novel Miguel Street, and the parts were taken by Gordon Woolford, Errol John and Andrew Salkey, prominent figures in London’s West Indian literary scene, while Vidia Naipaul himself played the role of the narrator".

While BBC’s Caribbean Voices, offered a platform to gifted West Indian writers (Naipaul’s father, Seeperasad had also worked for it), they also got locked into a racial ghetto, which frustrated Sir Vidia who had ambitions of becoming a writer of world renown. He was to write two more short stories, Old Man, about a Chinese family, and A Family Reunion, which was broadcast a few months after Seepersad's death.

"When Naipaul tried to get a traineeship in another part of the BBC, he was told that he would be unsuitable," French discloses: "Up before an interview panel, he remembers, ‘they were sniggering as I entered. I said I wanted to do some features, and they roared with laughter as though I had said I wanted to write the Bible’."

By the early 1960s, Naipaul had made a name for himself. When the BBC offered him 80 guineas for a script on India, his agent responded, "Mr Naipaul considers this offer an insult". The revised offer of 120 guineas was accepted. French adds that Naipaul had established he was "a tricky customer".